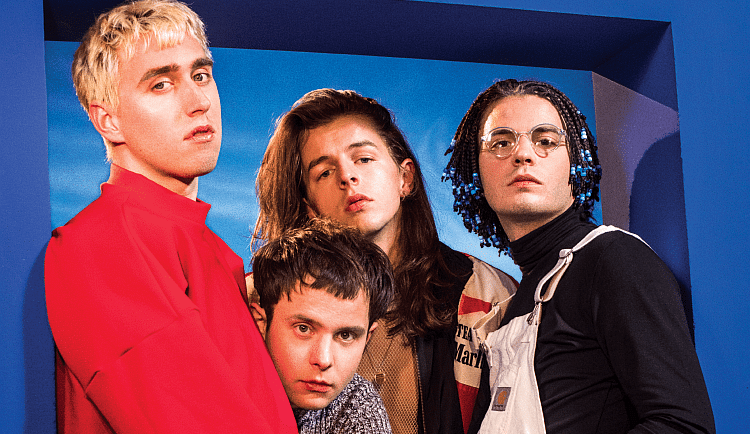 Hide your kids because the boys are back! One and a half years after their massive success “Schick Schock” they have released their newest album “Magic Life” (Maschin Records). And on this disc they are upping their game as the ultimate androgynous heart breakers of the German language music scene.

The cool thing about Bilderbuch is that the band can be so layered and still so pop that songs like “Amors Pfeil” take aim and hit you right in the heart. And once they have hit they are there to stay. Until the next Bilderbuch song takes their place. You can take any single aspect of the band and begin to unravel the layers behind them. Take their music videos as as example. “Maschin” perhaps, or “Om”, or their newest clip “Bungalow”. If someone discovers the band through these videos, they can begin to deduce quite a bit about them.

To begin with, the band doesn’t care much for gender cliches. In “Bungalow” the singer Maurice dances in mom jeans around a stripper pole and sexily sings into a vacuum cleaner tube. Do I need to say anything else? As Ernst frequently says in interviews “Equality is the goal”. And then there is the aesthetic, which always hits the contemporary nail on the head. Retro, but HD. That is the device that continues to revive music videos. And they use a similar principal in their music. In 2009 they sounded more like Muse than Prince, which isn’t a judgment, it just shows how far they have developed. They unite LoFi with HiFi, which means that they combine dirty screaming guitar riffs with danceable beats.

It’s a loving interpretation of the 80’s, without trying to copy the good old days. Instead, Ernst and crew take the elements that worked for dance and pop back then (heavy synths, poppy beats and cool electric guitar) and combine them with current trends. But the trends they focus on have changed from “Schick Schock” to “Magic Life”. Whereas it was indie-pop-deluxe 1 1/2 years ago, now they are using elements of cloud rap, vaporwave, and a hint of the oh-so-current chill wave. And Prince’s influences is more obvious than ever before.

You could say that Prince was the patron saint of songs like “Sweetlove” and “SUPERFUNKYPARTYTIME” (I mean, that name!). The first is heavily reminiscent of “God”, the b-side of the “Purple Rain” single. And the second took an obvious cue from Prince titles like “Superfunkycalifragisexy”. Musically you can compare them to songs like “Get Off” and “Alphabet Street”. But Bilderbuch isn’t a Prince cover band, and they never claimed to be.

The quartet is doing their own thing. Something that is rare and refreshing for the Austrian music scene. It is particularly refreshing that the songs can infuse apparently shallow lyrics with a very serious core. Although the album “Magic Life” deals with things like PlayStations, empty phone batteries and free sneakers, it manages to expose the shallowness of western society. Current crisis have made it apparent that a lot of us, especially the younger generation, wish for nothing more than a return to the carefree days in hotel mama. “Magic Life” is the life we would like to revive, but can’t. Yes, protest can be sexy, poppy, and extremely catchy. Bilderbuch proves that with every single song.

And it isn’t just an Austrian thing. Bilderbuch have long been a favourite on the entire German music scene. And with this album they have managed to make the German speaking music press even more giddy than with their past releases. Here are just a few examples of the media echo that has only just begun:

Süddeutsche „Bilderbuch retten den Pop aus der deutschen Konsonantenhölle“: “The new album “Magic Life” from the Viennese indie-pop band Bilderbuch is, yes, yes, ate least a middling miracle, much better than their grandiose precursor “Schick Schock”, and, of course, much better than almost every thing else that is currently being published in German language pop.” (…) “This album, that manages to put one good song after the other between your ears, is the best music right now”

Die Zeit „Mehr Drinks, mehr Dance, mehr Facebook-Friends“: “It’s likely that no one finds the band Bilderbuch more ridiculous than the band themselves. That is a good beginning..”

ARD „Bilderbuchs neues Album Magic Life“: “What began as a school-band is in the meantime the most exciting thing German pop has to offer right now.” (…) „This band is perfect “

Detektor.fm: Album der Woche „Proseccobläschen im Bauch“: “Varied, surprising and clever: despite all of the superficialities “Magic Life” indulges in, the album is full of witty shenanigans…”