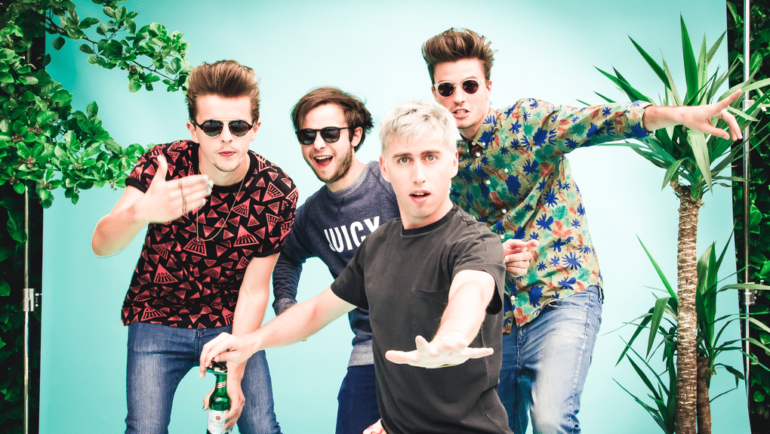 “Pop that is that good and very rare to find.”

For the ninth time Germany’s biggest club festival, the Reeperbahn Festival, will take place from the 17th – 20th of September 2014 in Hamburg and will attract music fans and industry professionals from all over the world with an extensive program.

Among this year’s musical highlights is the live performance of the Viennese band Bilderbuch on the 19th of September. The quartet is currently one of the most exciting Austrian acts and was chosen by Spotify for the prestigious “Spotlight on 2014” list. In the upcoming months music fans will get the chance to see and hear Bilderbuch in a series of live performances all over Germany.

Bilderbuch is known for their clever and witty lyrics that they bang out with massive rock rhythms: “Musical brutality paired up with disco, making any distinction between art and kitsch obsolete” (Süddeutsche Zeitung, 22.11.2013). The band consists of a classic lineup with two guitars, bass and drums and creates catchy songs that make you want to hit the dance floor. On their album “Nelken & Schillinge” (2009) they managed to find the perfect balance between rock, indie pop and old school-punk. Particular attention was laid on the lyrics, which are a wonderful mix of Dadaism, poetry and everyday phrases.

Even though the four always seem to have a very laid-back and laissez-faire attitude, their second album was meticulously thought out. “Die Pest im Piemont” (2011) turned out to be a concept album devoted to the themes of ageing, passion, desire and Italy. In 2013 Bilderbuch’s single “Plansch” hit the Austrian music scene like a refreshing tidal wave. From the compelling electronic playfulness and cool, mellow vocals to the juicy music video – Bilderbuch once again proved that their versatility comes along with mad talent.

The next single “Maschin” from the EP “Feinste Seide”, released by the band’s newly founded label “Maschin Records”, sends out a mix of sexy and nerdy sparks, which is heated up by the brilliant music video (by now with over 800,000 views on YouTube). There is no denying that Maurice Ernst (vocals, guitar), Michael Krammer (guitar), Peter Horazdovsky (bass) and Philipp Scheibl (drums) are full of style, attitude and pazazz, and bring the necessary musical skills to convert these attributes into amazing songs.

Noisey/Music by VICE once described Bilderbuch as “the embodiment of coolness. So cool, that they are probably the only ones besides Kanye West that can get away with autotune, without sounding like absolute shit – and that with German lyrics.”

The Süddeutsche Zeitung sums it up: “Pop that is that good and very rare to find. There are no words to describe this. This music is awesome, just because it is awesome. You have to listen to it. Even better: you have to get on the dance floor to experience it.”

In November and December Bilderbuch will be supporting the popular German band Beatsteaks on an extensive tour through Germany with stops in Erfurt, Bremen, Cologne, Dortmund, Berlin, Hanover, Frankfurt, Stuttgart, Munich, and many more.

Austrian Music Export (AME) invites all its partners and friends to a relaxing Viennese breakfast on the last day of the Reeperbahn Festival. Join AME for Melange (coffee), Sachertorte (cake), and a performance by 5/8erl in Ehr’n. Network with representatives of the Austrian music industry, ring in the final festival day in a casual atmosphere, and make new acquaintances. Open to all Reeperbahn Festival delegates!
Link:

5/8erl in Ehr’n created their very own genre quite some time ago. On their new album YES WE DOES (10/10/2014) they combine Viennese soul with heavy, rocksteady, melancholic waltzes, fabricating a beautifully unsettling reflection of themselves, the world, and the country they call home: Austria.