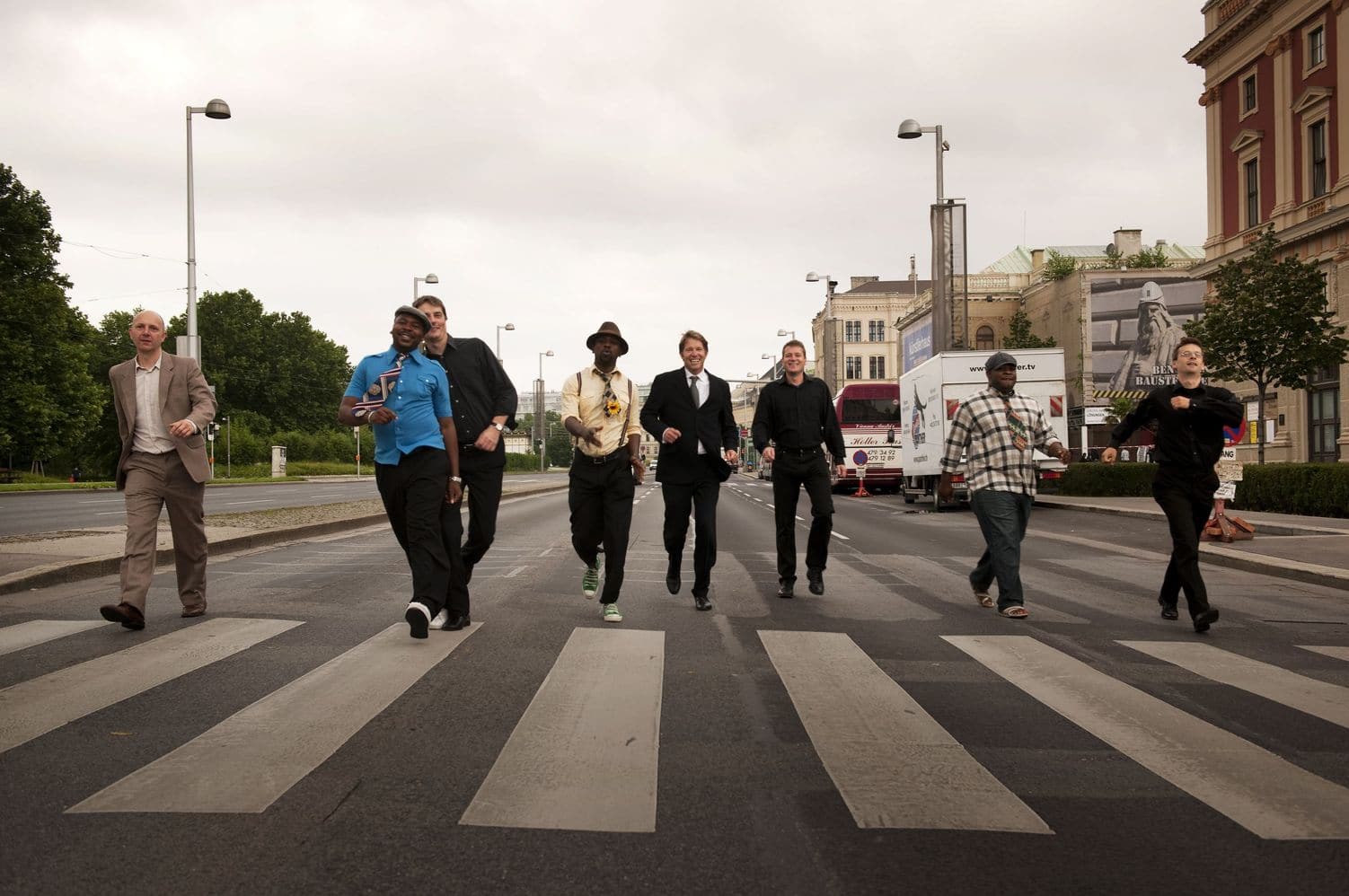 There are music projects that easily fall out of the ordinary by following approaches that do not correspond with usual conventions and positively differentiate themselves from the rest. The formation MoZuluArt definitely belongs to this category. The protagonists of MoZuluArt practice an elaborate abolishment of almost all conventional musical concepts and ideas by pursuing a blend of allegedly divergent sound worlds. With the aim of creating something completely new, they merge Zulu sounds and classical music into their pieces, especially music from Wolfgang Amadeus Mozart. A mixture that works excellently and leaves listeners in awe. MoZuluArt have long since made a name for themselves in the local world music scene, but have also caught the attention beyond Austrian borders.

Vusa Mkhaya Ndlovu, Blessings Nqo Nkomo and Ramadu never heard classical music in their youth, if ever, only by hearsay. When they walked through the streets of their hometown Bulawayo in Zimbabwe, it was mainly traditional native sounds that surrounded them. Leaving their country and choosing Vienna as the center of their life, is probably something they had hardly imagined, just as well as classical music being a decisive part of their artistic work. “I grew up in the ghetto, where nobody really knew about classical music. There was only local music. But it was played in the cities, in large shopping centers or hotels. I heard it there, but it had no meaning for me, I found it boring and too slow.” said Vusa Mkhaya Ndlovu in a mica-interview in 2008. 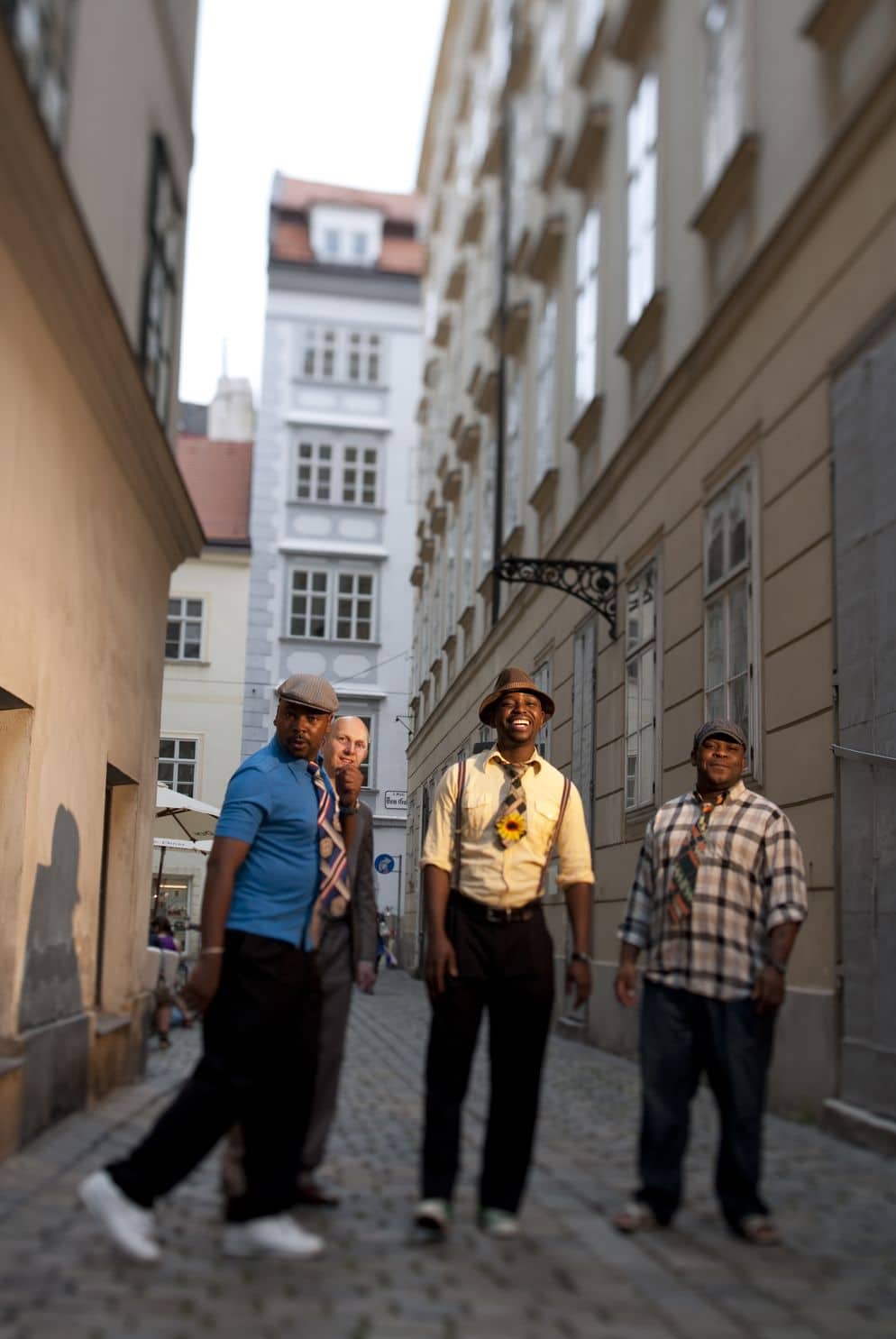 As so often, things turn out differently than expected. When the vocal ensemble Insingizi toured Europe with the aim to make Zimbabwean music more popular, the three singers landed in Vienna in 1996. They decided to pitch their tents in the Austrian capital city and continue their mission from there. They quickly came into contact with the local music scene and soon met the Upper Austrian jazz pianist Roland Guggenbichler. Roland Guggenbichler is no stranger to the local music scene and has worked with great Austrian musicians like Kurt Ostbahn, Hans Theessink, Hans Söllner and Erika Pluhar. As a musician who has always been open to all sides and has always been on the lookout for new challenges, the step to collaborate with the three singers from Zimbabwe wasn’t too far.

They began to work on a few pieces for a vocal trio plus piano and were soon very well received by the audience. The idea to integrate the music of Mozart and give it new life came to Blessings Nqo Nkomo in 2005, only a few months before the major Mozart anniversary year. As opposed to his three colleagues, the pianist Roland Guggenbichler was aware of this fact. Although the Upper Austrian emphasizes that there was no calculus behind the whole project – the idea of MoZuluArt rather corresponded with his own drive to always try something completely new. “I knew that all hell would break loose with the Austrian Mozart year in 2006. I kept this to myself when we pulled the project together. There was no calculation behind it. I was excited about the fact that people in Zimbabwe only know about Mozart when it comes to Austrian music, and here were three Zimbabwean singers living in Vienna for many years and wanting to get involved with music from the Austrian legend.” said the pianist.

The novelty resulted from merging entirely different musical approaches. The goal of Roland Guggenbichler, Vusa Mkhaya Ndlovu, Blessings Nqo Nkomo and Ramadu was to create a musical hybrid of typical traditions, without limiting themselves to certain styles. Thus, the incredibly diverse musical pieces have world, folk and classical music influences, as well as facets from popular music and contemporary jazz. The mixture could hardly be more diverse. The fascinating spectacle of sound was immortalized in 2008 on the CD “Zulu Music Meets Mozart”.

It is the extraordinary variety of sounds, which excites the audience everywhere. With its immense zest for life, the musical language of MoZuluArt is universal and inspiring. No wonder that the quartet is now being enthusiastically welcomed on stage in and outside of Austria. MoZuluArt stands for music that most fascinatingly bridges between past and present, between Africa and Europe and between different musical styles. It is exactly these bridges, which make MoZuluArt so unique and interesting.