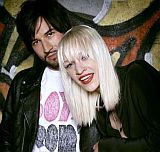 A few years ago nobody really thought that a formation like Bunny Lake  could establish itself as head of the local pop scene. The tracks of the early days which boomed from the speakers were too raw and rough, and the protagonists Christian Fuchs, Dr. Nachtstrom (Walter Brandner) and singer Suzy On The Rocks were not willing to commit to a compatible mainstream sound. But sometimes initial matters turn out to be quite different.

Looking at the recent career course of the band, we can indeed speak of a success story. Three first-class albums, the award of the Amadeus Austrian Music Awards 2009 and an ever growing fanbase abroad show that Bunny Lake is one of the most promising acts in Austria and will probably claim international recognition in the future.
Bunny Lake was founded in 2004 by Christian Fuchs and Walter Brandner, also known as Dr. Nachtstrom. The two musicians at first came from two completely different music genres. In the 90s, Christian Fuchs was the singer and lyricist of the industrial rock band Fetish 69, whereas Dr. Nachtstrom mainly moved in the experimental field of electronic music and released several albums on the legendary label Mego. With Bunny Lake – the name is taken from the film “Bunny Lake Is Missing”, directed by the Austrian director Otto Preminger in 1965 – the duo pursued a very different path. They entirely ignored their musical past and plunged into a world of heavy, very beat oriented, electronic club sounds with a good portion of pop appeal.

Still, the band was missing a suitable lead singer. Soon enough the two musicians found the ideal person in Theresa Rotschopf, known as Suzy On The Rocks. Bunny Lake’s first line up was completed by Christian Baumgartner on the bass guitar. While recording their debut album “The Late Night Tapes” in 2006, the  producer Gerhard Potuznik, alias G.D. Luxxe, played an important role in the recording process. G.D. Luxxe is quite famous in the Austrian underground scene and helped to produce the tracks of the album with a solid and unmistakable sound.

The first album was created as a concept album, telling the story of a wild party night, where the protagonists go through different emotions and situations. The music was influenced by dark post-punk records, various disco tracks , R’n’B and old horror movie scores. Lined with catchy techno beats, this highly idiosyncratic blend had an overall wicked sound, but at the same time had a glamorous feel. With “Disco Demons”, the band landed a real hit, which was played in the hippest clubs from New York to Berlin. 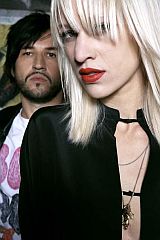 One year later, the band released their second album “The Church of Bunny Lake”, which seamlessly followed its predecessor. The album was produced by the Viennese techno pioneer Christopher Just, who had previously been working with international bands such as Kitsuné or Chicks On Speed. Like the debut, the critics of the country were again extremely enthusiastic about the new album. On “The Church of Bunny Lake”, Bunny Lake significantly moved more in the direction of pop, but without losing the energy of their infectious sound.

What followed were many successful concert appearances at home and abroad. The combo was also rewarded for their efforts in 2009 with the Amadeus Austrian Music Award for best act in the category “Electronic/Dance”. In addition, Bunny Lake contributed a song to the soundtrack of the Austrian hit movie “Dead in 3 Days II”. Late last year, the band finally moved from the indie record label Klein Records to the major label Universal.

In March this year, Bunny Lake released their long awaited third album “The Beautiful Fall”, again produced by Christopher Just. Compared to previous albums, Bunny Lake are now significantly more varied and therefore stylistically more diverse. Although the new pieces are still very danceable and have a great drive, the razzmatazz has been shifted into a much more relaxed position. There is not much left of the fierceness of the old days. Perhaps even more than before, the trio worked with sounds from the 80s and 90s, again reflecting the influence and direction of pop music.

With „The Beautiful Fall“, Bunny Lake have mastered the often difficult balance between musical claim and mainstream suitability with flying colors. Their singles are played on both commercial and independent radio stations. This is something that rarely happens in Austria and once again emphasizes the exceptional position of Bunny Lake in the local music scene.