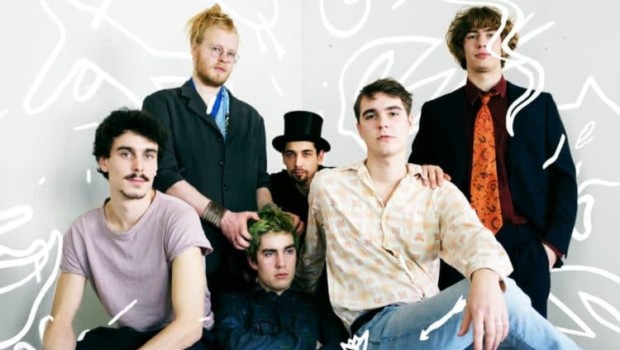 LUKAS KLEIN and FLORENTIN SCHEICHER are the two songwriters and autochthonous Viennese of the six-member group BUNTSPECHT. They brought their instruments to the interview with Michael Franz Woels, because afterwards they went straight on to the recording studio of MARTIN SIEWERT. He recorded with them their current album “Draußen im Kopf” [“Outside in the Head”]  on Phat Penguin Records. And during these recordings so much material has been created that BUNTSPECHT continues to tinker calmly with an EP. There will be even more piano-parts, that much can already be revealed.

After their promising debut “Großteils Kleinigkeiten” [“Mostly Little Things”] on  Phat Penguin Records which they recorded last year live in a garden shed in Hütteldorf [a Viennese district, note of the translator]  in only a couple of days together with KLAUS TSCHABITZER (DER SCHWIMMER), they were able to develop the new songs in the recording studio over several months. May the result be called a fabulously bubbly indie-pop album? You may get an idea of the live performance qualities of BUNTSPECHT.

“Here, the most diverse directions and realities of life come together.”

One of your songs is called “The Man next Door”. There is also a song of the same title by the German singer Franz Josef Degenhardt on his album “Spiel nicht mit den Schmuddelkindern” [Don’t play with the grubby kids, note] from 1965. Is this a hidden reference? Do you know the music of Franz Josef Degenhardt?

Lukas Klein: No. You mean we would like that song?

Yes I think so. I use the rather German term “grubby kids” to lead to the next question: How important is the stage outfit for you – even to create something like a so-called stage character?

Lukas Klein: At first, I did not like to be on stage and it still feels funny. Even as a guitar player I initially was a purist and did not want to use effects, only play “organic sounds”. But if, for example, you drive for nine hours in a car to a show in Basel/Switzerland, and then stand there on stage for an hour, then you want to exploit any performance level that you have. This disguise alters everything, you feel different.

Florentin Scheicher: This ritual of dressing up makes a significant difference. There is this very punky-noisy side project “merd saplo” where during our very rare gigs we pull stockings over our head and nail them to the ceiling. You’re another person, in disguise, no one recognizes you. I discovered a certain freedom there.

Lukas Klein: Regarding the separation between stage character and private person: One finds another, freer access to the world. The extracted ego senses the connection to the magical and the present moment. It’s only about the little utopia of a song, everything else then is secondary.

Florentin Scheicher: I am a person who doubts a lot. But the stage is a place where any doubt is dropped for a short moment.

How much is the writing of lyrics for Buntspecht a common process?

Lukas Klein: I write seventy percent of the lyrics, the rest interacting with Florentin. Associative writing I find exciting when it “whispers behind your forehead”. I fiddle about the basic compositions at home, the arrangement is then “jammed together” by all of us.

Florentin Scheicher: We developed the last song, “Nabelschnur” [Umbilical cord], together on the piano. First there was a text by Lukas, then the song finally grew together from different parts. I then tried this rap in the beginning. A journey through satirical landscapes.

Lukas Klein: It was the same with the single “Unter den Masken” [Behind the Masks] now, Florentin first had the lyrics, which I then broke down again.

Florentin Scheicher: We don’t have a clear way of how to approach songwriting.

Lukas Klein: I find it exciting that I do not exactly know how I function.

How did the collaboration with Martin Siewert actually come about?

Florentin Scheicher: Through our management. We were offered three producers that we all met. With Martin Siewert we felt the most comfortable. We also decided then not to record the album live like our debut “Großteils Kleinigkeiten”. So we had a lot of leeway to think about sounds. Following that, the process of recording the songs took much longer.

Lukas Klein: We had no idea at all about the many possibilities we are offered in a studio. In September of last year we made test recordings for the first time, by February “Draußen im Kopf” [Outside in the Head] was finished. Unlike Martin Siewert, we already knew Klaus Tschabitzer who recorded our first album. He is Florentin’s stepfather. That was nice because a funny, intimate relationship arises when outsiders like a producer suddenly join the group that makes the music.

Florentin, you are also the man behind the videos. How did the video shoot for the anthemic single “Unter den Masken” come about? Is it true that you are shooting the videos especially right after live performances, to capture that energy, that abundance, or even emptiness that shows up after them?

Florentin Scheicher: Most of the video from “Unter den Masken” was filmed after a performance in Switzerland. After the concert we drove around in an industrial area with special lighting conditions.

Florentin Scheicher: Another example of a spontaneous video shoot after a gig in Halle is the experimental short film “Der Mieter” [The Tenant] under the side-project name “merd saplo”.

Florentin Scheicher: The website was planned by our drummer Florian Röthel. We wanted a challenging, annoying, confusing website. We also devised the visual concept of the album “Draußen im Kopf” as a duo. I am rather the illustrative type, Florian then put a frame to all of that and also selected details such as the fonts.

Lukas Klein: I never find anything on the website right away…

You complement each other not only musically, as a collective. What are the different characteristics and preferences?

Lukas Klein: I like listening to romantic and impressionistic piano music by dead composers. A living musician I currently enjoy listening to is New Zealander Aldous Harding, also because of her lyrics. I am a completely restless spirit and stressed out very quickly. Our bassist Jakob Lang is the exact opposite, a picture of calm, even if he arrives late. Jakob listens to a lot of rock music, his father is a jazz guitarist.

Florentin Scheicher: After my minimal-techno- and drum-‘n’-bass-phase, I started making music with Lukas and playing the melodica. I’m dealing with the instruments I play only very recently. At the moment it’s the trumpet. Roman Gessler, our saxophonist, comes from Lake Constance, likes hip-hop and has an insanely broad musical knowledge. He is also the one who knows the organizers and bookers and all these matters. Lukas Chytka studied the cello in the USA, then hitch-hiked a lot in Europe and was a busker. That’s how we met him.

Florentin Scheicher: Nevertheless, on longer road trips we can agree on so-called theme trips. For the time being we are listening to Italian music from the 1970s and 1980s by, for example, Umberto Tozzi or Paolo Conte.

You integrate many styles into your music. This eclectic approach is also a hallmark of pop music in general, as it is mostly based on many influences.

Lukas Klein: A healthy dose of “theft” is one of them. I like to take good thoughts and build a lyric out of them. I think that’s legit. As the writer Egon Friedell put it: “The whole literary and artistic history of mankind is a story of theft.” And if a thinker could not prevail, it was because she or he did not find enough thieves.

Florentin Scheicher: The next album is already announcing itself, the sound just keeps evolving steadily. More piano parts are emerging.

Lukas Klein: We have only been playing together for three years now. Everyone always wanted to play all the time, on the first album. Now we are beginning to slowly cut down on the instrumentation, and sometimes omit instruments. Sometimes it also takes a discussion and the dismounting of songs, but then again there are days during which we’re just gambling, so that the playfulness does not get lost.

Thank you very much for the conversation!