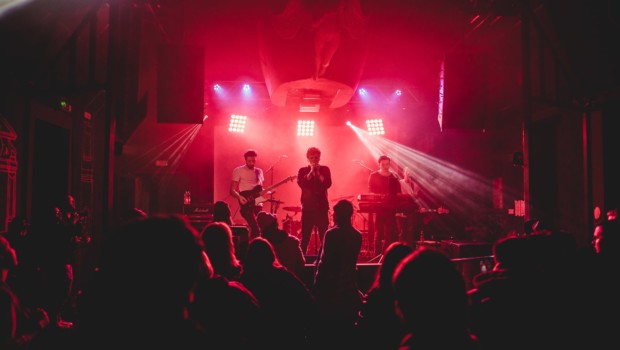 Down the river Danube and only a few hundred kilometres from Vienna, BUSH – Budapest Showcase Hub – recently took place in the Hungarian capital. The Eastern-European festival with an international approach celebrated its opening night at the legendary club A38 with the Austrian band MOTHER’S CAKE as the opening act. Furthermore, the festival invited singer/songwriter THORSTEINN EINARSSON and psychedelic pop act PRESSYES to play. The 4th edition of BUSH featured a “Spotlight on Austria”, including dedicated networking opportunities, an Austrian reception and the presence of Austrian panellists during the conference itself. The flawlessly organized conference section of the festival took place in the Feszek Artists Club. This extraordinary venue made the perfect host for a series of dedicated listening sessions, international panels and discussion rounds.

The well-traveled trio Mother’s Cake was warmly welcomed by the Hungarian audience, with the progressive rock band from Tyrol getting the festival’s atmosphere warmed up immediately on the A38 Ship. With heavy guitar riffs and strong vocals by Yves Krismer, Mother’s Cake got the audience dancing, singing and even ultimately taking some stage dives at the front rows. Once you´ve seen the trio live, you can easily understand why their tour calendar is so fully booked. At BUSH, Mother’s Cake had the rare opportunity to play in a club situated on a former ship.

Singer/songwriter Thorsteinn Einarsson’s set fell on the second day of the festival at Instant Club, located in the former Jewish district of Budapest, not far from Feszek Artists Club. Luckily, it was easy to reach for the delegates. The show was perhaps a bit too early to get truly crowded – a bit more audience would have been nice for Thorsteinn and his band. In 2019 the charismatic musician played at Eurosonic Noorderslag (NL), Reeperbahn Festival (GER) and The Great Escape (GB), and he describes himself as “showcase festival trained”. And you could tell this watching the performance live, as Thorsteinn and his band played both perfectly solidly, and softly evoked emotions. Huge applause from the small audience.

Last but not least, indie pop act Pressyes went on stage at Toldi Klub. Marlene Lacherstorfer and Rene Mühlberger of Pressyes let us know that the gig was probably the latest they’ve ever played:

“We were on stage at about 2:30 due to an extended changeover of the bands before us, the stage managing was a little improvised. But at our show there was still a lot of interested audience and people were shaking and singing along. Toldi seems to be a good place to be after midnight! So all in all it was a good experience for us.” – Pressyes

On the first day of the conference, Austrian Music Export and Waves Vienna invited all delegates to an Austrian Heartbeats Reception with fine food and drinks. It was once more a good opportunity to mix and mingle with the Austrian delegates. The following day offered yet more occasions for exchange through dedicated panels. Jeroen Siebens (Radioplugging.eu) discussed today´s possible ways of getting a song from the artist to the fans. Furthermore Hannes Tschürtz (ink music) hosted a well-attended listening session with Seppl Kretz (Sizzer). All those who wanted to know more about Austria, were welcome at the panel “How to Work Best with Austria” hosted by Franz Hergovich (Austrian Music Export).

The Spotlight on Austria at BUSH – Budapest Showcase Hub was supported by the Austrian Cultural Forum Budapest.