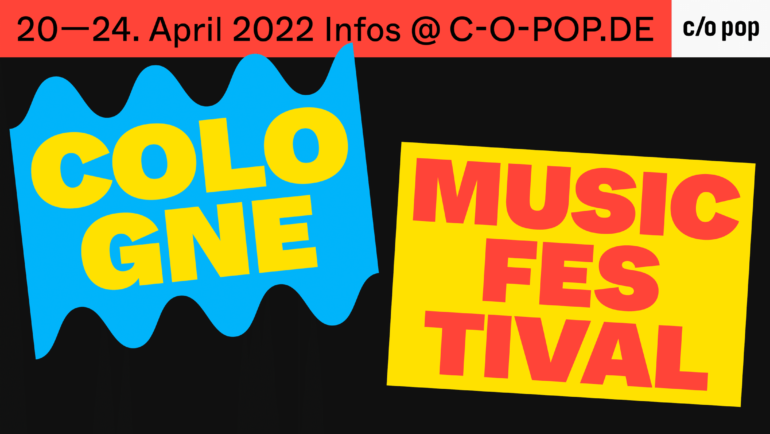 c/o pop Festival brings us five days full of pop culture, live in Cologne, from April 20 – 24, 2022! This year, BILDERBUCH is the festival headliner, with FRIEDBERG, BUNTSPECHT, VERIFIZIERT and TAKESHI’S CASHEW packing the lineup as well.

Since 2003, c/o pop has been transforming Cologne into an urban music melting pot each year. As part of the c/o pop festival, they bring the hottest newcomers, the hottest acts and established artists from Germany and abroad to the beloved city on the Rhine.

The live shows and showcases take place not only on the usual concert stages, but also in unusual locations such as stores, kiosks and boutiques. In addition to a number of concerts, c/o Ehrenfeld also presents a diverse supporting program with numerous pop-cultural events.

In addition, the c/o pop Convention offers keynotes and talks, workshops and various formats to make valuable contacts in the music business. The new digital platform Fanklub, which was founded by the Viennese indie label LasVegas Records, is also presented here. The Austrian-German start-up gives bands, musicians and DJs the opportunity to communicate directly with their fans and generate a stable income.

An Austrian reception will offer the opportunity to meet industry representatives and artists.

MEWEM Europe – Mentoring Program for Women Entrepreneurs in the Music Industry is also organizing a network meeting as part of the c/o pop Convention and is represented with a panel.

In partnership with c/o pop Festival, Austrian Music Export has arranged a special rate for Austrian delegates. To obtain your ticket discount code, please send us an eMail until April 11th. Additional travel & hotel discounts can be found on the festival website.

2022 opens the festival with BILDERBUCH (April 20) as the headliner on the stage of the Kölner Philharmonie. The band has created a real hype and combines the most diverse musical styles with partly German, partly English lyrics. FRIEDBERG (April 21) is a rock band centered around singer Anna Friedberg. The Austrian artist, who lives in London and Berlin, was recently nominated for a MUSIC MOVES EUROPE AWARD 2022. BUNTSPECHT (April 21) loves to play with the German language and either reveal its blurriness or immerse it in surrealistic moments. TAKESHI’S CASHEW (April 21) is a psych-funk group that explores the boundaries of club culture, world music & 70’s psychedelia. And last but not least, VERIFIZIERT (April 24) will bring her very own style of Cloud pop and German trap to Cologne.

On the 20th of April 2022 the first physical c/o pop Festival since 2019 kicks off with two highlights at once: with Bilderbuch on stage at the Kölner Philharmonie. The Philharmonie is the perfect venue for the band from Austria, which has announced shows exclusively on concert hall stages for their upcoming tour. For the c/o pop Festival, opening band and venue are an ideal match; after all, the festival presents extraordinary artists* on equally extraordinary stages every year.

The four-piece band Bilderbuch from Vienna combines various elements of indie rock, hip-hop, funk, artpop, R’n’B and Austropop with German lyrics, some with a Dadaist touch, to create a driving, danceable sound. At the latest since the single “Maschin” with the accompanying video, Bilderbuch have triggered a real hype in 2013.

With her escapist blend of post-punk, alt-rock and seductive pop songwriting, Friedberg’s sound is made for a night out: “I hear the trees applaud as we ride by.” The project itself grew out of a vision to create an entirely new sound for London-based Anna Friedberg (writer, vocals, cowbell, guitar and more cowbell). Backed by a stellar cast of musicians, Emily Linden (guitar, vocals), Cheryl Pinero (bass, vocals) and Laura Williams (drums), they develop just that. Music that is instantly familiar, but also like nothing you’ve ever heard before.

Just as if Hildegard Knef and Bertolt Brecht had attended a concert by the Dresden Dolls, then visited an exhibition by Salvador Dalí, and then holed up in the studio with some absinthe, Buntspecht mixes chamber pop, cabaret punk, and Austrian klezmer into an enraptured sound experience with lyrics that also defy all common understandings and unambiguities. Singer Lukas Klein recites them in his nasal High German with a pinch of Viennese Schmäh, leaving the people in front of the receivers puzzling over their countless levels of interpretation.

Buntspecht love to play with the German language and either reveal its blurriness or immerse it in surrealistic moments. There, where reality reaches its limits, Buntspecht set out to stretch them a bit further. Klein’s lyrics sparkle with exuberant wordplay and mischievous twists. “Jump before you fall” therefore shouts.

Go to your record shelf and pick out that quirky (and  unforgettable!) folklore vinyl you once found on a fleamarket  somewhere on your travels. And now imagine that sound being  complemented by vintage synthesizers, flutes, twangy surf  guitars, a hell lot of space echo … & electronic downtempo beats!

Takeshi’s Cashew (Laut&Luise, Berlin) are a newly formed psych-funk group that explores the boundaries of club culture, world music & 70’s psychedelia. All coming from different musical  directions, they create a colorful fusion of their respective genres embedded in a club-like beat framework and elevate  their often complex arrangements to a beautiful & danceable potpourri.

During summer 2020 Takeshi’s Cashew recorded their debut album  “Humans In A Pool” in their tiny diy-studio in Vienna.  This self produced record will take you on a journey into cosmic  krautrock, cumbia, afrobeat & disco, which can only  be surpassed by one of their live performances.

“Verifiziert doesn’t like to categorise herself in a genre. If only because, in her opinion, every beat comes from a different genre. But if you had to settle, she would describe her sound as “cloud pop”. There are borrowings from spherical rap, mixed with the delicacy of lo-fi and the catchy toplines of pop. It’s all wrapped up and perfected in and by the aforementioned unpretentious coolness of an artist who approaches the creation of her art without ulterior motives and whose voice ties a bow around each of her works like a delicate silk ribbon.

Her choice of themes is similar. It’s a lot about love, but not classic boy-girl stories. It’s about feelings, but not just the superficial ones, the real ones. It’s about life, but not necessarily just the flashy adventures, but also the pastel banalities that can be just as exciting and important. In short, it’s about natural authenticity and not poses. Verifiziert proves with her music and not least with her attitude that really good, German-language pop music still comes from Austria in 2021. And is female.” – c/o pop 2022

The Austrian Cultural Forum Berlin is a proud partner and sponsor of c/o Pop 2022!