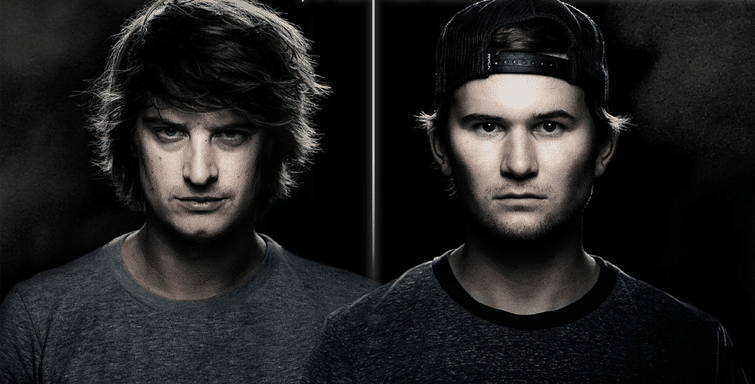 Camo & Krooked are currently sweeping the globe by storm, playing at countless festivals and clubs, and causing euphoria and sensation with every show. Their recent album “Zeitgeist” transcends the realms of electronic dance music and proves that the subgenre drum’n’bass is here to stay.

Strike one: Select a label and scoop up all the awards

The successful producer duo Camo & Krooked consists of longtime collaborators Reinhard Rietsch (Salzburg) and Markus Wagner (Lower Austria). What first started as a solo project in 2002 has since turned into the flagship band of Austrian drum’n’bass. After performing all over Austria, they were soon highly acclaimed and took home the prestigious Austrian Amadeus Award in 2010. In the meantime on an international level, Camo & Krooked were exclusively signed by the renowned London drum’n’bass label Hospital Records. The label’s release of Camo & Krooked’s album “Cross the Line” received three of the coveted Drum & Bass Arena Awards (in the categories “Best Producer”, “Best Video” and “Best Album”) in 2011. In an interview Camo & Krooked once revealed that they partially work seperately in different studios. This process of constantly exchanging and improving each others musical material finally forms the finished tracks.

The overall sound of the Austrian producer duo is based on their love for drum’n’bass, but in the past few years their musical style has ventured through a wide range of other genres. One of their most important influences, which are many, is the drum’n’bass band Pendulum. This song-oriented approach, dominated by vocals rather than MCs, is reflected in the productions of Camo & Krooked. Their current album “Zeitgeist” (Hospital Records) shows the diversity of their sonic approach. Inspired by dubstep, the album delivers numerous drum’n’bass hits, which are played by DJs across the globe. The album includes the track “Loving You Is Easy” that became the summer hit of 2013 with sold out concerts and enthusiastic audiences.

At this year’s Sonar Festival in Barcelona, which is regarded as the largest music festival of electronic music, Camo & Krooked had the honorable position of performing as the closing set. Playing at 175 beats per minute, this techno festival would not just hand this task off to anyone. On another event, they thrilled the masses at the Electric Daisy Carnival in Las Vegas and partied the hell out of their seventh performance at the Austrian Urban Art Forms Festival in front of thousands of visitors. Camo & Krooked are currently on a roll and this does not seem to be stopping anytime soon, since the two will be headlining the fifth birthday bash of the renowned podcast, merchandise and ticketing platform UKF.

The success story of Camo & Krooked demonstrates two things: First of all, that the Austrian electronic movement of the 2010s is full of great artists with enormous potential – this is reflected in the sum of amazing releases that enrich the international music scene. Furthermore, the approach of the two producers confirms that it is possible to venture into the unknown, but yet always stay true to your own, distinct sound. Who would have thought that the genre drum’n’bass could experience such highs and that a formation from such a small country like Austria could contribute to this in such a big way.