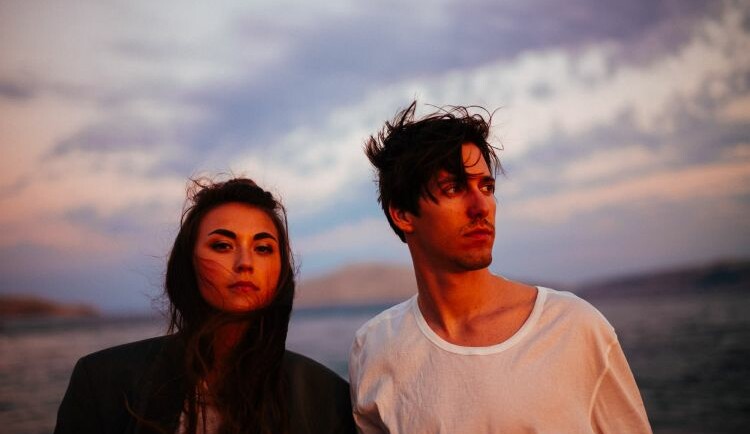 In November 2018 CARI CARI released their debut album “ANAANA” (Ink Music) and immediately entered the Austrian charts. The DIY duo STEPHANIE WIDMER (vocals, drums and didgeridoo) and ALEXANDER KÖCK (vocals and guitar) have, since their founding in 2014, been involved in the soundtracks for the US series “Shameless” and “The Magicians”, on tour in Australia and as a support act for GARISH and this year at several festivals like THE GREAT ESCAPE (UK), EUROSONIC NOORDERSLAG (NL), PRIMAVERA SOUND (ES) and NOVA ROCK (AT). “ANAANA” is the word for “blaze” in the Maori language but also means “mother” in Greenland. Julia Philomena spoke with the band about their road trip to Mars, their cinematic ambitions and the advantages of a fanbase in their own country.

What has changed since the beginning of the band? Have there been any essential changes? In an interview you said you didn’t want to lose this childish feeling. Has that worked?

Alexander Köck: We started with Cari Cari in an informal and aimless way. For example, two weeks before the recording session for our debut EP, Stephanie sat down in front of a drum set for the first time. For us, easy access has always been the main thing, especially as neither of us have a professional university background. I started playing guitar at the age of twelve, spending every free second I had with it. Back in school I started my own label, made electronic beats in my studio, had different bands – always DIY.

Stephanie Widmer: Compared to that I actually have an even more untouched background in the world of music. Although I went to a music school and learned the violin very early on, I wanted to put it back down again relatively quickly. The violin is an ungrateful first musical instrument. It takes hard work until you can at least play “Alle meine Entchen”. Besides, I didn’t like the music school in general. I didn’t understand the grades, the teachers were all very strict, I was never allowed to go to the bathroom during the lessons – all bad experiences that I have associated with music per se. It was not until I was 14 or 15 that I approached an instrument again, picked up my guitar and taught myself how to play it.

“FOR US, EASY ACCESS HAS ALWAYS BEEN THE MAIN THING.”

Alexander Köck: We never expected Hollywood to be interested in our music. On our blog we shared our music with the world, but without any ambitions and very relaxed. Our first EP was recorded in an uncomplicated way. When Indie Shuffle, a rather big and important American music blog, suddenly chose us as “Song of the day”, we got attention from everywhere. From one day to the next we were being played in the American TV series “Shameless”, went on tour in Australia, worked on our second EP. Now all of a sudden a lot of people got involved and thought that it was time for a professional studio. We stood in front of a guy who wanted to record the drums alone with 20 microphones. It was all dead, characterless, and far too serious. We thought hard about it for a long time until we decided to completely dump this whole recording operation.

The professional side is not bad, but it’s not for us. After that we left and moved around, lived in Hamburg and London, actually started all over again. In other words, we tried to find our way back. To the only criterion that is important for us: that we ourselves enjoy what we do. We don’t have to ask anyone for permission. There is no such thing as right and wrong. That’s what we realized on our journeys and used as the motto for our debut album.

The DIY label is very important to you. Why has your music video for “Summer Sun”, for the first time ever, not been produced by yourself?

Alexander Köck: We’ve actually always made all the videos by ourselves, we only brought someone else in for “Mapache” and “Summer Sun”. We wrote the scripts, but we brought established people on board to direct them – and we regret that very much [laughs].

Stephanie Widmer: We definitely learned that it doesn’t matter what budget you’re working with. The quality doesn’t depend on it.

Alexander Köck: We just don’t want a stamp of approval from the outside. If someone wants to help us, that’s great! We are happy about input. But we know exactly how Cari Cari should sound and look like. The style must always be recognizable!

“THE STYLE MUST ALWAYS BE RECOGNIZABLE!”

Your debut album can be understood as a musical Cari Cari collection. What are your main themes? What distinguishes your style?

Alexander Köck: We generally have a penchant for costumes and foreign worlds. This probably reflects our love for childhood. With “Mapache”, for example, a big dream has come true because we finally immersed ourselves into the world of the spaghetti western. As big fans of Sergio Leone we enjoyed this shoot very much!

The fact that film is something close to your hearts is also confirmed by the international requests for soundtracks. Just last year you said that you were more successful abroad than in Austria. Has that changed? According to Spotify, Cari Cari is mainly listened to in Vienna, Berlin and Hamburg.

Alexander Köck: Yes, it depends a lot on the platforms. On YouTube and various Internet blogs we still have American and Australian listeners. Now that we’re present on FM4, Austria has also started to notice us – and of course we’re happy about that, because it’s quite complicated or tedious to organize an American tour from Vienna.

You have been on the road a lot over the last few years and now live in Vienna again. What has changed through travelling and is there a consistent safe haven?

Alexander Köck: We have become a really good live band due to all the travelling and playing in different places. The absurd thing is that for this very reason Vienna has become a place of refuge because we are never at home anyway. London has grown very close to our hearts, especially all our friends there. For example, there is a funny anecdote from London about “Mapache”. After sitting in the pub for an evening, we all spent the night at a friend who has three Spanish flatmates. One of them sat stoned with his girlfriend in the living room and said that everyone got an animal name, he was “el lobo”, the wolf. Then he randomly distributed names until I asked him which one his girlfriend would get. “Mapache,” he replied. That was the last piece of the puzzle the song was missing. Thank you, London, for your people and inspiration!

So London for inspiration and Vienna for living?

Alexander Köck: Yes, in Vienna the world is still in order. Our friends in London are fighting for survival and have no perspective. If you’re not a borderliner, that’s terrible. In Austria you have the opportunity to make a living from art, earn money with music and have your own studio. We have ours in Burgenland on Lake Neusiedl, for example. The most beautiful oasis.

You moved to London immediately after the Brexit vote.

Alexander Köck: Yes, in the city that voted against Brexit there was a doomsday mood, especially in the art scene. The Brexit is not a catastrophe in itself, but a symbol of our time. That hurts a lot. On the other hand, we got to know great people in this upset mood and learned a lot about music.

Is there a context, a setting in which you prefer to perform?

Alexander Köck: I immediately have to think of Space 44, a gallery in Sidney, Australia.

Stephanie Widmer: That evening was just like home parties in America. Completely insane. We played as a supporting band for Drunk Mums in a tiny room.

“AND THAT’S EXACTLY WHAT THIS PACKAGE IS GOING TO BE: BIZARRE, ABSURD, IMAGINATIVE.”

Alexander Köck: From the first note on, the people were out of their minds, dancing and laughing. That was super cool. Above all, everything was so pleasantly unprofessional. The equipment, everything was torn to shreds. The best atmosphere!

What’s the mood on your debut album?

Alexander Köck: Difficult! The spectrum ranges from “Mapache” and “After The Goldrush”, two more constructed numbers for which we worked with samples and electronics, to “Do Not Go Gentle Into That Good Night”. The track was recorded live. You can hear exactly one take with my guitar and Stephanie’s voice. And this overall package is exactly what we are: bizarre, absurd, imaginative.

Can we expect new soundtracks or a feature film by Cari Cari in the foreseeable future or will you publish your documentary about the No Budget Tour in Australia?

Alexander Köck: We have to finally cut the documentary! But yes, absolutely! The music comes first, but right after it comes the visual. I can well imagine that in five years we will also be a directing duo.