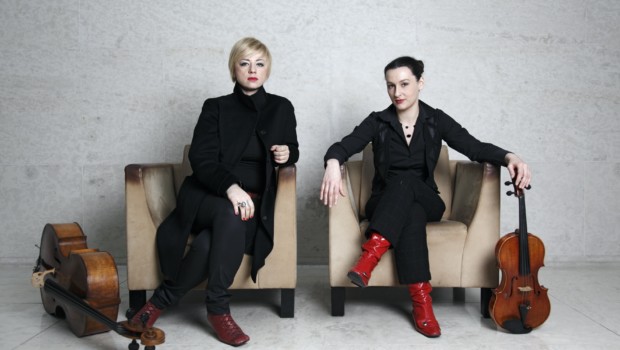 Jelena Popržan and Rina Kaçinari are the perfect example of how one, without problem, breaks boundaries and freely traverses borders; not only musically, but having both been raised in conflict-laden countries, the one from Serbia, and the other from Kosovo-Albania respectively, have each taken from their experience and unified it with creative output.  Since a long while they have accompanied each other on this creative journey, which began with a first encounter at a musical production they each participated in, and has lead to a steady rise in notoriety within the Austrian music scene, especially with the release of their first full length album.

The name Catch-Pop String-Song refers to, on the one hand, a description of their passion to the instruments they use, and on the other radiates the power and energy into the world, not only of their musical force, but as the energy they themselves continually represent and express in new ways. The duo has power, courage, vitality and a working method, which has been reflected back in the already large following they have attracted; and as already hinted at, a result of their continual drive to break down and through all barriers. Hearing a few songs it is clear that the duo is not easily categorized into any genre or style, albeit standing within the rows of the general music store, one could easily head towards the aisles of World Music, Pop/Rock, or even Classical.  The music easily speaks to a large swatch of music lovers, wherein a diverse group of people can each find songs to add to their favorite list. We recommend the listener dives into the majestic and groove laden cello-viola-vocal mixture themselves: a unique mixture performed by Jelena Popržan, which defies from its simplicity alone, the ability to generate so much groove.

Although Jelena Popržan und Rina Kaçinari both received classical training, they break out, as almost no other contemporary Austrian musicians at this time can, accepted and established musical forms. Stylistically, the music embodies traditional Balkan folks music and combines it with Slavic inflected Pop, infused with jazzy improvisation reminiscent of Bert Brecht and Kurz Weill, while surprising and humorous moments of Austrian referenced street lingo mixed with elements of Cabaret theater. As a live Duo, Jelena Popržan und Rina Kaçinari, lead by their passion for playing and improvising, wander ever deeper into the infinite sonic playfield they generate, sparks of emotional energy that warm the hearts of almost any listener capable of being touched by something magnificent.