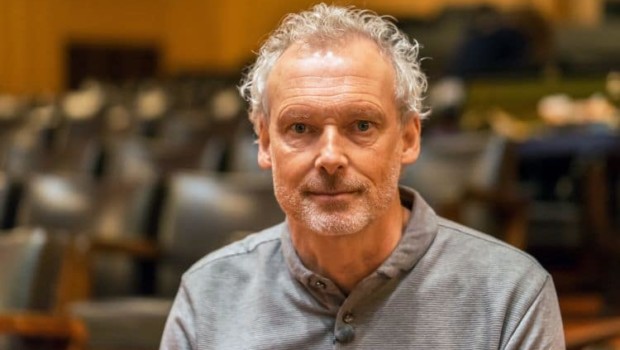 He is one of Austria’s best-known jazz trombonists, pianists and composers. He also regularly conducts classical orchestras and writes pieces for them. Now CHRISTIAN MUTHSPIEL, born 1962 in Styria, has found a new challenge, namely a big band: the ORJAZZTRA VIENNA. Roland Spiegel spoke with the artist about the project.

The last time we met, you told me: “Soon I’ll either climb a mountain or start a big band.” Now it is the big band. Is that easier or harder?

Christian Muthspiel: What I can expect from the artistic and organisational management of this big band is probably something I can rather assess than the answer to the question of how my head feels at 5,500 metres above sea level – and still having 500 metres ahead of you. But of course such a big band is big project.

“BUT OF COURSE SUCH A BIG BAND IS A BIG PROJECT”

Something that takes courage and a lot of breath?

Christian Muthspiel: Yes, and I have respect for it. But I have an incredibly positive energy. I know that it is something I have to do.

Although such a big band is a huge mountain in terms of finance, isn’t it?

Christian Muthspiel: With the help of some supporters – donors, institutions and public funding – I take care of the basic economic needs of the Orjazztra which should allow me to pay fair wages to my musicians and keep the orchestra alive. It is obvious that at today’s catastrophic level of jazz fees such a large ensemble cannot survive without financial support. I would like to thank all those who support us.

“THESE YOUNG MUSICIANS HAVE INSPIRED ME A LOT.”

You just said that you had to do it. What drives you to do so?

Christian Muthspiel: I just want to be able to realize my compositional ideas with my own big band. And this band is interesting: If you don’t include me, the average age is around 30, so we are very young. These young musicians have inspired me a lot. I’ve listened to various bands and recordings of these mostly very young people to find out what and how they make music.

Christian Muthspiel: I went on an expedition, and those were the musicians I really wanted to have with me. This line-up is deliberately not a classical big band line-up. First, I have a six person strong woodwind section that all play two to three different saxophones and clarinets. If they only play their main instrument, the movement consists of a soprano saxophone, two alto and two tenor saxophones, and a baritone saxophone. And then there is a slightly smaller brass group with three trumpets, two trombones and a tuba. And therefor the double rhythm section with two percussions and two basses. That’s a pretty special orchestration, because I just wanted to let off steam as a composer. For example, I can now make arrangements with three bass clarinets and three soprano saxophones. And of course the double rhythm section also offers a lot of possibilities for ideas and composing.

“[T]HE COMMON DENOMINATOR IS PROBABLY MY DESIRE TO BE AN ARCHITECT.”

So your desire to compose was the central aspect for the founding of this orchestra?

Christian Muthspiel: The common denominator in the various things I have done over the past years and decades is probably my desire to be an architect. Composing is the architecture of music. I sometimes miss compositional signatures in jazz. Every now and then I would wish that many of the wonderful players we have today would put more effort into composing. With this band, I intend to develop a real orchestral culture that is also trained in what I do as a classical conductor: playing really dynamically, really working on the timbres, really working on the phrasing. With a lot of big bands I have the feeling that the dynamics are often not taken into consideration when it comes to composing. But in classical music that’s one of the main aspects of expression. And above all comes the balance within the orchestra: How do the individual groups relate to each other dynamically? The balance is very precise. When does something come to the fore? How do different instrument groups mix? I am very much looking forward to working intensively on such things.

Does someone like Carla Bley have a role model function for you when working with such a big band?

Christian Muthspiel: Carla Bley was one of the musicians who made me want to be a jazz musician. There were four concerts that determined that for me. One was the Albert Mangelsdorff solo. The second one was the Carla Bley Big Band. The third one was the Art Ensemble of Chicago. And not to forget the fourth concert: Harry Pepl and Werner Pirchner. When I was 17, 18, it was clear to me that I also wanted to enter this world. All of these were concerts I had heard in Graz. Carla Bley has always been very important to me, especially as her role as a composer. She has found her own handwriting within the tradition of jazz. The Carla Bley Big Band has always sounded different than any other big band. If you want to name some more role models now – or maybe we should call them inspirations – then it’s definitely Carla Bley, Maria Schneider and of course Gil Evans. And my ten years in the Vienna Art Orchestra have also had a strong influence on me. The Art Orchestra was always a very important band for me ever since the very beginning, long before I had played with them, also because they sounded so unique and somehow European, but they still grooved. Mathias Rüegg’s compositional handwriting, this unique sound, with Lauren Newton, for example, who often sang the lead voice instead of the trumpet: These things have always fascinated me.

Should the Orjazztra Vienna in some way be a continuation of the Vienna Art Orchestra, which unfortunately had to be dissolved for financial reasons ten years ago?

Christian Muthspiel: It will inevitably become something of its own when I write the music. It also has a different orchestration and I have a different emphasis or other questions that arise during the composing process. But the longing for a large line-up was already implanted into me back then by Mathias Rüegg. It was a great feeling travelling in a band of twenty people. It was the same with Mathias, the soloists had their own space. You weren’t interchangeable. It is very important to me that the musicians are not interchangeable, that they have their freedom. And that all the parts are really individual. I have already written quite a few classical concertos for solo instrument and orchestra. The sound and the playing style of the soloists I wrote them for: Without them I would have starved to death. Benjamin Schmid, Gautier Capucon, Hakan Hardenberger: I´ve heard the musicians more than seeing them while composing the pieces. And now I find it so beautiful that it’s about 17 people.

Musicians born in the late eighties and early nineties have a completely different musical background in terms of socialization than someone born in 1962. How does this influence working on the pieces?

Christian Muthspiel: I already notice it while writing: I have a lot of fun with rather complicated odd time signatures, because the young generation now deals with them in such a natural way we couldn’t have back then. This for example challenges me. And the rhythm section, of course. For example influences from styles like hip-hop and drum ‘n’ bass, different forms of techno and so on, that obviously influences the way we play. For the last few years I have always played with musicians who were my age or older than me, and now I really want to hear this other musical socialisation in my own band. Two thirds of the band are my daughter’s age!

Christian Muthspiel: In this case a lot. My last jazz projects were more about moving in familiar languages: the “Dowland” projects, Christian Muthspiel’s Yodel Group, the duos with Steve Swallow. But now something completely different is on the way. Now I can’t fall back on anything. I’ve never had my own big band before. Now I don’t have 30 scores laying in a drawer, but rather write everything new. And it is a process of discovery.

Like being at six thousand meters and breathing fresh air? Air, that may sometimes be thinner than you are used to?

Christian Muthspiel: Yes, that’s a good comparison. Now I’m a little torn between euphoria and respect. What also plays its part in this are many organisers who immediately told us: “Yes, you have to come to us for the first season”. I can’t even play a single note right now, there’s nothing to play yet – and yet we’ve already booked a whole season with quite a few concerts. There’s a lot of trust and premature praise for this project and I take that as a hint of fate that I’m really taking this seriously and getting very strongly involved in it.

Roland Spiegel – translated from the German interview by Dave Dempsey.