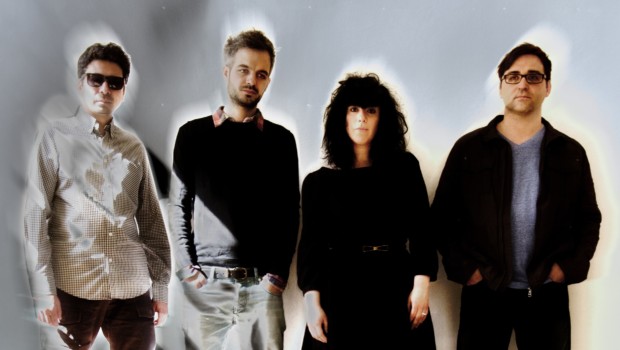 Artist Portrait
Sometimes bands are formed in the heat of the moment. For example, when a musician on tour gets along so well with members of his support band that he decides to move to their city. This is not an urban legend, but the genesis of Ghost Capsules. The dark electronica quartet was formed due to the acquaintance of British Tim Simenon and Viennese Roman Lugmayer and Georg Lichtenauer. Simenon was visiting Vienna to promote the album of Bomb The Bass, the music project of Simenon, who started to make music in the 1980s.

While promoting his music, he met drummer Lugmayer and keyboardist Lichtenauer of the Viennese band Valesta. The three hit it off immediately, so much, that Simenon gave up his residence in Amsterdam and moved to Vienna, where the three soon after founded Ghost Capsules. An addition and perfect fit for the band are the mesmerizing vocals by Laura Gomez, who Simenon had once hired for a club night event.

When it comes to the music of Ghost Capsules, nothing is left to chance and everything is very clear and well thought out. Lichtenauer’s self-description in an interview speaks volumes: electronic, melodic and tinkered are the key words. The latter can also be interpreted as overly intellectual, since precision has the utmost priority. Gomez’ lyrics are also very trenchant. The melodies form the cool foundation for her voice, letting her rule over the emotions like a dark queen.

Some may compare the quartet with Moloko, only Ghost Capsules are more nocturnal, while Roisin Murphy and Mark Brydon are more open to sunlit clearings. However, Ghost Capsules do not want to present themselves as too dark and gloomy. The best definition comes from Gomez herself, who described their music as dark bittersweet chili-electro with a hint of espresso.

The band’s eponymous debut album was released in the spring of 2013 and was quickly picked up by the international media. No wonder with the band’s clear vision and concept. From the production to the instrumentation – Ghost Capsules bring it to the point. And yet, it is not only the record that makes the party. It is the after-show buzz of the music that accompanies you home after walking through the dark streets of a big city. Subtle goose bumps, last twitching body parts, asking for one last move and hovering over it all with the seductive bedroom voice of Gomez.
Anne Marie Darok
(translated from German)