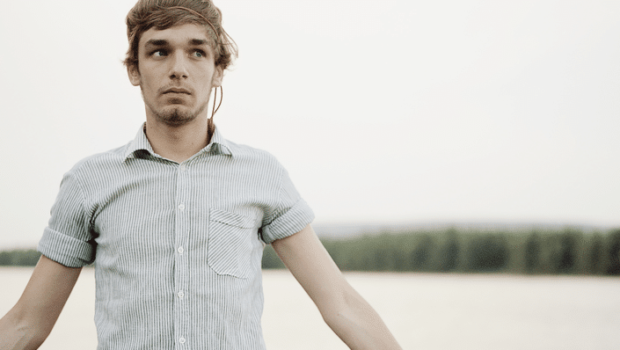 Band Portrait
With their folk-inspired, melancholic indie-pop, Sweet Sweet Moon is a unique musical species that should be protected in this country. Despite fellow peers, the Lower Austrian musician Matthias Frey is claimed to be the sole mastermind behind this project and has brought this profound American-induced discipline across the Atlantic with all the necessary realness and authenticity. He immerses himself in the romantic ideals of the introspective singer/songwriter existence, as well as the noble restraint, which is commonly displayed by musicians that can reflect on the pure quality of their song treasures. From the debut album “Pompidou”, which was still marked by the lo-fi aesthetic of a solo maverick, up to the more recent exhibits such as the mini album “Candy Floss”, with songs that evidently drift to broad orchestral sounds and are reminiscent of opulent forerunners such as Bright Eyes – the always surprising and intuitive musical feel of Matthias seems to work in all ensembles and formats.

His reputation gained a significant boost in 2011 when the video production company “They Shoot Music” documented a spontaneous gig at the Vienna Rahlstiege. This incident filmed on the spur of the moment became a surprising favorite on Youtube and won over fans from all over the world, especially from South America. The factors for this click success is hard to break down. Firstly, there is the undeniable songwriting quality of the performed piece “I See Things That You Don´t See And That Is Blue, Blue, Black And Dylan”, which enfolds an irresistible pop appeal somewhere between quavery baroque, saloon-country-fiddling and contemporary folk. Another main factor is the skillfully produced documentation of this mini concert, which visually transports the spontaneity and the magic of the moment passers-by experienced. And last but not least, there is the obvious charisma of the two musicians Matthias Frey and Lukas Pöchhacker, which results from the contrast between youthful impetuosity and earlier artistic maturity.

Since their South American admirers contributed a great deal to the YouTube success, Sweet Sweet Moon wanted to thank them for their support and came up with the idea to launch a broadly announced crowdfunding campaign to be able to tour through Argentina, Chile and other nations with considerate fan bases. Once again the crew of “They Shoot Music” were on the spot to collect filming material of the tour and create a resulting documentation with the sounding title “Fuck The Atlantic Ocean“.

The gnarly charm of the early days with the often tumultuous tribulations seems to now be obtained by state of the art production technology  – at least concerning official recordings. Today the arrangements are more delicate and sophisticated, the productions clearer and more abundant. Hence the relatively young band history, it is somewhat difficult to predict where the journey will go. Matthias Frey’s undeniable intuition of finding the beauty in small things and his simultaneous tendency for large dramatic gestures, which risk and affirm vulnerability in such an exposed presentation, allow the conclusion that there is still a lot that can be expected. After all, he is one of the most promising and unusual songwriters of his generation – and this not just within the Austrian borders.