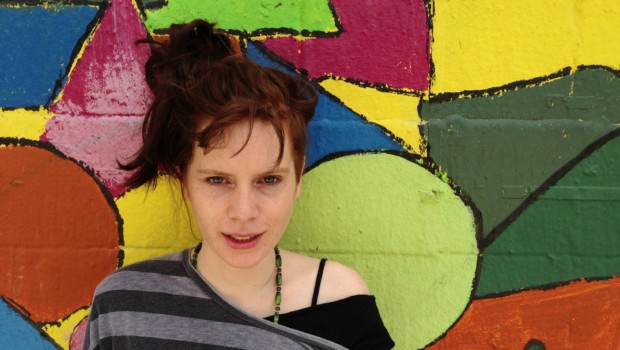 Artist Portrait
Veronika Eberhart can already look back on a solid career, but there are no signs of her stopping anywhere soon. For quite some time now she has been pursueing her musical activities under the name of Tirana. It all began in 2005, when she helped to organize the second Ladyfest in Vienna. At the event, which focused on the under-representation of women in the music and art scene, she met Julia Mitterbauer. Together with their friend Alena Pfoser they founded the band Ilsebill. In long night sessions they taught each other the wildest styles and skills on a variety of instruments.

Four years later, only Mitterbauer and Eberhart were left, who henceforth called themselves Plaided. Apparently all kinds of fateful paths pointed to that band name, since they were inspired by various sources. In the beginning with Ilsebill, they performed  “plaided” shirts, just like Mike Watt, a multitalented musician whose trademark is the respective shirt. Another inspiration was the band name p.l.a.i.d. in a documentary about a Girls Rock Camp in Portland. And last but not least, the abbreviation of their EP title “People lying around in dirt every day” also led to that name.

The record label Fettkakao already took Ilsebill under their wing and then also helped Plaided with their debut album “Playdate”. With the help of the multitasking miracle musician Wolfgang Möstl, it was recorded in Graz. His influence can be heard in the raw undertone and the lo-fi production of the album. With Pfoser, the band had a keyboard player that made the music of Ilsebill sound more playful. Reduced to guitar and drums, apart from a supporting bass, “Playdate” sounds like pleasant anarchist punk. In the lyrics and production you can hear the independence of the duo and the resistance to being pigeonholed.

Comparisons to the riot grrrl scene of the 1990s are quite apparent. The feminist subculture was a reaction to the dominance of men in the music scene. Typical male elements of stage shows were not only taken over by female bands, but also caricatured. Musically the riot grrrl sound belongs to hardcore punk. Today’s organizations such as the Ladyfest build on the 90s movement to convey the naturalness of female protagonists in the music scene.

The performances of Plaided are not only influenced by this message, but also by singers with strong charisma such as Scout Niblett or Screaming Females. And since Plaided are doing exactly their thing and always remain true to themselves, they were invited by the American band Grass Widow to support them on their U.S. West Coast tour in early 2013. Along for the ride were Andi Dvorak, the label owner of Fettkakao, and the filmmaker Cordula Thym. The latter filmed the entire road trip that will be released as a mix of road movie and documentary.

Since 2011, Veronika Eberhart already started cutting her own path. Her solo project Tirana and her first single “Red Hills”, which was released on a Fettkakao compilation, received a lot of praise. The film director Katharina Mückstein used the song as the theme song for her new movie “Talea” and asked Eberhart to compose more songs. With the help of Wolfgang Möstl, she created the songs “Talea” and “Ready to go”. “Talea” is a gentle guitar ballad with a generous intro. “Ready to go” is a true Euro-disco dance song with synth sounds and sprawling (expansive) vocals. The two new songs were released in 2013 as a vinyl EP “Talea”. Currently Tirana is touring through Austria and making the audience dance and reflect.
Anne-Marie Darok
(translated from German)
Photo: Andi Dvorak