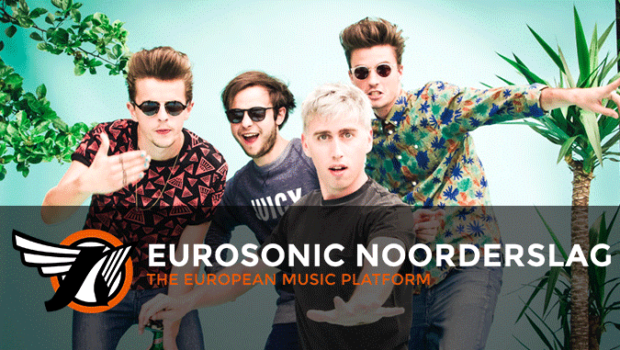 Everyone in the European music industry knows that each year kicks off with Eurosonic Nooderslag, Europe’s most significant showcase festival in the live music industry that takes place in the Dutch city of Groningen in January. Festival organizers, music promoters and pop experts from all over Europe come together to get an idea of the latest music trends and newest promising acts romping around the continent.

With a lot of good talent around, it is a great honor to be selected as the country’s musical representative and a huge opportunity to showcase in front of so many industry professionals. The Austrian band Bilderbuch are well on their way to becoming an international success story, and so it comes as no surprise that they were chosen to perform at Eurosonic Noorderslag 2015. Congratulations!

On the surface the history of Bilderbuch reads like a classic success story with everything included, from the underrated school band to their ascent in 2013. Digging deeper, it soon becomes quite apparent that Bilderbuch is anything but a classic rock band.

Bilderbuch’s story began in 2005 when four young guys from Upper Austria decided to make music together. Although at the time only between 14 and 15 years of age, the foursome was armed with a lot of energy and plenty of ideas. Unlike all the countless nu-metal cover bands around them, Maurice Ernst (vocals, guitar), Klemens Kranawetter (guitar), Peter Horazdovsky (bass) and Andreas Födinger (drums) were interested in music with German lyrics. They at first started setting fairy tales to music and received a few gigs outside of school. This did not go on for very long as Bilderbuch soon realised that the fairy tale material would not last forever and so they embarked a different path.

In this stage they were discovered by the former Russkaja members Zebo Adam and Manfred Franzmeier who supported them on their debut album in 2008. “Nelken & Schillinge” was the result that was presented to the public in the summer of 2009. With regular airplay on the popular Austrian radio station FM4, the band was invited to play at several large festivals. Internal changes, such as saying good-bye to Klemens Kranawetter and hello to the new member Michael Krammer, was in no way detrimental to the harmony-laden work of the band.

With a mix of rock, indie pop and old school punk, the music of the album “Nelken & Schillinge” is especially noted for its homogeneity, since the songs were developed over a span of three years. Special attention was given to the lyrics which lie somewhere between Dadaism, poetry and everyday phrases. Some were inspired by real life events: Maurice fulfilled his community service in a psychiatric hospital where he was fascinated by the seamless transition of abstract to sometimes absurd thoughts. In general, the human psyche plays a major role in Bilderbuch’s lyrics.

This is also demonstrated on the band’s second album which was released in 2011. Although always with a laissez faire touch, the four band members took a very conscious approach on the new album “Die Pest im Piemont” that turned out to be a concept album devoted to the themes of ageing, passion, desire and Italy. The new album was not only praised by the Austrian media, but also received high recognition in Germany.

The most important and current milestone of Bilderbuch’s band history was laid in 2013. With newbie Philipp Scheibl on the drums, the single “Plansch” took the Austrian music scene by storm and was deservedly celebrated as the indie summer hit of the year. Already on the rise, there was no holding back with the new single “Maschin” from their EP “Feinste Seide”. Accompanied with its brilliant video, this song was soon hyped all over the German-speaking realm and triggered a wave of positive reactions.

Of course, such a successful year comes with a plethora of beneficial consequences. Besides all the raving reviews from fans and critics, Bilderbuch embarked on a fully booked festival summer. The four were also nominated for the Amadeus Austrian Music Awards in four categories – more often than any other act. It is clear as day that Bilderbuch have firmly established themselves on the top of the Austrian pop music world and are emerging with full force into the music scenes of the neighbouring countries.

Noisey/Music by VICE once described Bilderbuch as “the embodiment of coolness. So cool, that they are probably the only ones besides Kanye West that can get away with autotune, without sounding like absolute shit – and that with German lyrics.”

The Süddeutsche Zeitung sums it up: “Pop that is that good and very rare to find. There are no words to describe this. This music is awesome, just because it is awesome. You have to listen to it. Even better: you have to get on the dance floor to experience it.”