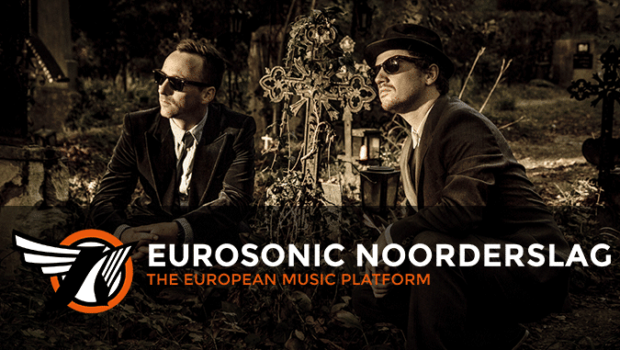 Each new year starts with the first official gathering of the music industry at Eurosonic Nooderslag, Europe’s most significant showcase festival. Festival organizers, music promoters and pop experts from all over Europe come together to get an idea of emerging music trends and the most promising acts of the continent.

With a lot of good talent to go around, it is a great honor to be chosen as the country’s musical representative and a huge opportunity to showcase in front of so many industry professionals. Selected as one of the five Austrian acts performing at Eurosonic Noorderslag 2015, the Viennese duo Ogris Debris is ready to work their magic in Groningen and make the audience sweat with a fine blend of techno and house.

Ogris Debris are an internationally acclaimed producer duo straight out of Vienna and – hell yeah! – the lads know how to rock a stage! Rough and smooth at the same time, a tasty single malt, no ice. Their lively presence is paired with an outspoken affinity to practical jokes and a deeply felt love for music that takes you places and moves your ass.

Combining cutting-edge digital production with finest ingredients of techno and house, Ogris Debris create a unique brand of dance music that is widely acknowledged as innovative by the global scene. They receive regular airplay on national radios across Europe and create special mixes for Gilles Peterson’s „Worldwide“ on BBC Radio 1 or Michael Rütten´s „Soulsearching“ radio show. Their sound is championed and charted by the likes of Anthony Shakir, Cosmin TRG, Pete Tong, Peter Kruder, DJ T, Rainer Trüby and many others.

Since forming in 2007, Ogris Debris have released a bunch of 12“ singles, EPs and remixes. Most notable their debut on the „Compost Black Label Series“, which was instantly followed by the trans-European supersmasher „Miezekatze“, the famous „Aery EP“ on their home label Affine Records, a collabo with Swiss outfit Round Table Knights, plus the epic rework for label mate Dorian Concept which received proper awareness beyond genre-affiliations. In 2012 the guys delivered uplifting reworks for UK house maestro Joey Negro and Brownswood Recordings’ Zara McFarlane.

Ogris Debris have performed sell-out shows at prestigious venues worldwide, taking their energetic and tempting live show to dancefloors in cities such as Berlin, Moscow, London, Zürich, Budapest, Tokyo, Munich and many more.