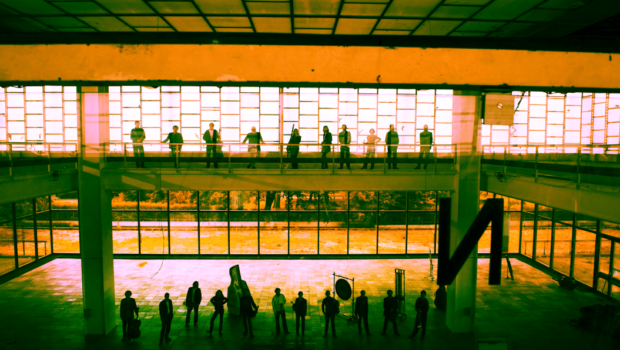 Over the past two decades, contemporary music in Austrian concert halls has been subject to a partly abrupt, partly slow-moving change in the programming of large Austrian orchestras. As a consequence, medium-sized and smaller ensembles have become all the more significant in terms of presenting contemporary music production. An overview of some of the most prominent groups.

Since its founding in 1989, the Klangforum Wien has continuously presented a wide range of progressive tendencies of the Austrian and the international scene as a guest at all major festivals at home and abroad. A special feature of the programming is that the performed composers or works are selected by the ensemble’s musicians and not by a superior directorship. A single, “simple”, annual balance of the Klangforum – here 2012 was randomly singled out – reads in its self-description as follows: 17 new compositions – music theatre premieres: Andrea Molino “Three Mile Island” in Karlsruhe and Rome – Enno Poppe “IQ” in Schwetzingen – Claudio Monteverdi/Philippe Boesman’s “Poppea e Nerone” at the Teatro Real, Madrid – concerts in: Tokyo, Buenos Aires, Oslo, Hamburg, Cologne, Lucerne, Krakow, Milan, Madrid – cycle “europa, GLOBAL” at the Vienna Konzerthaus – Wien Modern, opening concert with Olga Neuwirth’s “Hommage à Klaus Nomi” – two appearances at the Salzburg Festival as well as concerts in: Alpbach, Graz, Bludenz, Linz (Bruckner Festival), Graz (Musikprotokoll), Schwaz (Klangspuren) – educational projects: professorship at the Art University of Graz – two school projects “Children compose” – percussion workshop for teens – new CD releases: Aperghis – Rihm – Resch – Sciarrino.

For decades the ensembles die reihe, the Ensemble Kontrapunkte under the direction of Peter Keuschnig and the ensemble xx. jahrhundert under Peter Burwik have been the three most traditional Viennese ensembles for contemporary music and are still very active in this millennium, for example with the Ensemble Kontrapunkte playing their annual seasonal cycle at the Gesellschaft der Musikfreunde (Society of Music Lovers), where they constitute the majority of the contemporary music programs. A highlight is their consistent effort for classic modernism: the Viennese School of Schönberg, Berg and Webern, along with many of their important contemporaries such as Wellesz, Krenek and Eisler are experienced by many listeners “live” in concert for the first time, as well as the French Groupe des six of Milhaud and Poulenc. For many Austrian composers of the younger and middle generation, this personal commitment of Keuschnig has often opened the first opportunity for a performance at the Musikverein.  An individual contribution is also expressed in the dedication for compositions of the deceased Gerhard Schedl, who ended his life through suicide (1957-2000).

The ensemble xx. jahrhundert can also boast with a proud résumé in its found niche: As part of the concert series “lauschergreifend”, which is regularly organised in cooperation with the Austrian Composers’ Association since 2008, the ensemble has so far been able to present the audience with more than three dozen Austrian composers – some with world premieres. A CD with recordings of some of these works was released in 2012 under the label Capriccio.

Temporarily also “shaken” by general developments, the oldest of these ensembles seems to have regained new confidence with its anniversary: founded in 1958 by Friedrich Cerha and Kurt Schwertsik, the ensemble die reihe commissioned a dozen compositions for its 50th anniversary celebration in 2008/09 that were appointed to composers across the generations and aesthetic orientations. Currently artistically supervised by HK Gruber and Christian Muthspiel, the ensemble cooperates with Austrian conductors of the middle generation such as Alexander Drcar and Oswald Sallaberger, and presents the current programs both in the capital city as well as in further venues, and maintains a partnership with the Austrian Society for Contemporary Music (ÖGZM).

The ensemble Phace has also been active for many years in the contemporary music scene and includes, in addition to the focus on contemporary chamber music, music theatre productions and interdisciplinary projects with dance, theatre, performance, electronics, video, DJs, turntablists or installations. In 2010 the ensemble started the series PHACEx, which deals with staged “musical-theatrical” spaces and blurs the lines between contemporary music, performance, electronics, audio and video (installation). In the 2012/13 season Phace was invited to present its own separate cycle in the Vienna Konzerthaus.

The ensemble reconsil wien was founded in this millennium by the composers Roland Freisitzer, Thomas Heinisch and Alexander Wagendristel, with Freisitzer as the permanent conductor. In addition to premieres of primarily – but not only – younger composers, reconsil plays an important role in the chamber music of the Viennese School with its constant presence at the Arnold Schönberg Center Vienna. Currently the ensemble is preparing an epic large-scale project: from the 13th – 23rd of March 2014 in Vienna’s Odeon Theater, the project “Reconsil Exploring the World” will confront 42 commissioned works of Austrian composers with 42 works of composers from other nations. Presumably, this will be the largest project focused on international networking in the field of contemporary music in Austria – an integral part thereby is the openness to other cultures and various aesthetic currents.

The ensemble LUX was launched in 2004 by Julia Purgina, Šimon Voseèek, Ernst and Thomas Wally. Starting with a basic string quartet formation, the ensemble can be expanded as desired and is primarily dedicated to the interpretation of recent to newest works, while always maintaining stylistic openness. Among many other concerts, the ensemble has performed in the context of the ISCM Festival 2007 at the Vienna Konzerthaus, at the Bregenz Festival, Wien Modern, and in the seasons 2009/2010 and 2010/11 as the ensemble in residence of the ÖGZM.

Founded in 2006 by Hannes Dufek, Fernando Riederer and Christoph W. Breidler, the Ensemble Platypus was able to quickly establish itself in Vienna’s contemporary music scene with the “crazy” sounding and equally compelling idea to organize long hour marathons of contemporary music. With its focus on the young and youngest composer generations, the ensemble has meanwhile become an important partner for the festival Wien Modern and is one of the few ensembles that also pays special attention to a particularly high proportion of women in the programs.

The currently youngest ensemble for primarily contemporary music is the Max Brand Ensemble, launched by Christoph Cech and Richard Graf. Named after the exiled Austrian composer Max Brand (1896-1980), it presented its first concert in the context of the “Tage der Neuen Musik 2012” in the Minoritenkirche in Krems with compositions by Friedrich Cerha, Bernd Richard Deutsch, Michael Mantler, Sonja Huber and Johannes Kretz.

Since 1997 under the leadership of the violinist Frank Stadler and cellist Peter Sigl with the constant guest conductor Johannes Kalitzke, the ensemble oenm (oesterreichisches ensemble für neue musik), founded in Salzburg in 1975,  has been able to sharpen its profile as a top-notch ensemble for contemporary music and present itself at numerous international festivals. A specific feature was introduced in the 2008/09 season with a cycle that viewed “Salzburg’s string music” from a contemporary standpoint and commissioned five composers to incorporate the typical folk instruments dulcimer, zither, guitar and folk harp into contemporary art music sounds. Other thematic focuses of the oenm were presented at the first Salzburg Biennale 2009 with concerts such as “Beat Furrer and Flamenco Jondo/Cante Jondo”, “Steve Reich and Gamelan Music from Bali”, “Toshio Hosokawa and Music from Japan”, as well as “Klaus Huber and Arabic Music” and in the season 2010/11 with “fingerprints”, where individual musicians of the ensemble were the focus of attention.

About a decade younger than the oenm is the Tiroler Ensemble für Neue Musik (TENM). Founded by composer Günther Zechberger, the pianist and conductor Dorian Keilhack took over as the artistic director in 2003. In 2004, the co-production “Stravinsky Oedipus Rex” with the Augenspieltheater Hall was chosen as the best independent theatre production in Austria. Its programs provide an essential platform for composers in Tirol, but also include the entire spectrum of Austrian and international contemporary creativity, as well as modern classics. Besides playing an important role in Tyrolean contemporary music events, the ensemble has been able to perform concerts throughout Europe, North America and Asia. Since 2007, the TENM is led by accordionist Harald Pröckl.

Primarily for the purpose of realizing his own graphic scores, the Upper Austrian Christoph Herndler gathered a by self-definition “interdisciplinary project group” – the Ensemble EIS. As head of the ensemble, Herndler implements his creative ideas with the inclusion of artists from the fields of dance, film, visual arts and literature. Of course other composers are also always involved in the program. Thus, around November this year, the EIS string quartet will perform Luigi Nono’s “Fragmente – Stille, an Diotima” at the Contemporary Music Festival of the ISCM – Upper Austria Section. As with almost all modern ensembles, the Ensemble EIS includes musicians, who are also represented in other ensembles and thus have a broad overview of general events.

Styria offers the Studio Percussion Graz, which was founded in 1979 by Günter Meinhart and is one of the most prestigious contemporary music ensembles. Its repertoire covers, as the name implies, classical percussion literature of the 20th century with a special emphasis on the creativity of young composers, whose works are distributed at home and abroad. The usual cast of six drummers is sometimes extended up to ten or combined with other instruments. To promote international communication and present high-profile percussionists to the public, the Studio Percussion Graz has been hosting the Night of Percussion since 2007. Meinhart has also been leading the Austrian Percussion Camp as a new educational-informative platform since 2009.

This year the Ensemble Zeitfluss in Graz will be celebrating its tenth anniversary in October 2013. Motivation for the founding fathers – the Burgenland saxophonist Clemens Frühstück, the native Iranian composer Kiawash Sahebnassagh and Croatian conductor Edo Micic – was simply to enrich the Graz music programs with contemporary compositions. Works by international composers of the 20th century with newly commissioned works are usually closely juxtaposed to composers associated with Graz. For example Klaus Lang, Klaus Dorfegger, Anselm Schaufler, Thomas Amann, Joanna Wozny, Bernhard Lang, as well as the previously largest individual composition, the world premiere of Peter Ablinger’s  “Stadtoper” in 2005.

In Carinthia, the Ensemble Kreativ – founded in 1985 – plays an essential role in the dissemination of contemporary music. Led by Bruno Strobl until 2009, more than 200 works were performed and premiered in Carinthia, other Austrian federal provinces and neighbouring countries. In 2005 Strobl founded the Ensemble MusikFabrikSüd, which appoints a composer in residence every year (Peter Jacober, Thomas Amann, Elisabeth Harnik).

Since the founding of new ensembles is often initiated by musicians themselves or organisationally active composers, their names are naturally also found in the programming of the respective ensembles. For example, in addition to the three “founding fathers” of 1987, the Ensemble Wiener Collage was also supervised by Erik Friday, Eugene Hartzell and René Staar,  followed by Zdzisław Wysocki, Herbert Lauermann and Alexander Stankovski, and more recently, inter alia, also Charris Efthimiou, Dietmar Hellmich, Gerald Resch, Thomas Wally and Jaime Wolfson.

A unique ensemble in the contemporary music scene is the 1. Frauen-Kammerorchester von Österreich, which was founded in 1982 by Brigitte Ratz and consists of exclusively female musicians. In addition to its classic-romantic repertoire, the ensemble especially promotes the works of female composers from all eras with numerous performed premieres.

Founded in 1996 after the premiere of Christoph Cech’s opera “Aus allen Blüten Bitternis” at the Vienna Chamber Opera by those involved, the Janus Ensemble was usually active with two to four annual concerts, as well as workshops and composition courses, with a core focus on the combination of composed and improvised music. With the establishment of the Max Brand Ensemble, the work of Cech has been laid down.

The Pierrot Lunaire Ensemble Wien was also initiated in the year 1996 by the flutist Silvia Gelos and the pianist Gustavo Balanesco. The concept of presenting music from “all directions” refers to both the openness to all aesthetic approaches, as well as to the origin of works from all over the world. According to the ensemble, more than 500 works by approximately 250 composers have been performed over the past 15 years, with only a small part of the concert activities being in Austria. Extensive tours regularly bring Pierrot Lunaire to all continents.