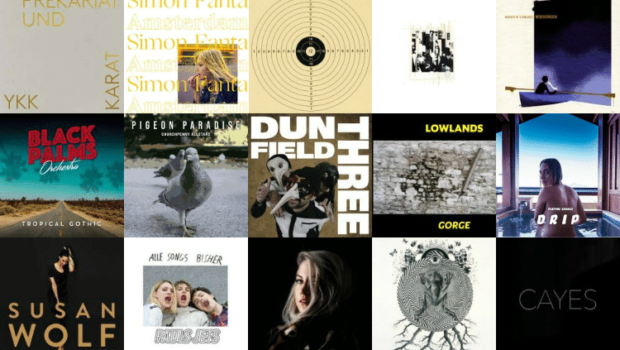 Shilla Strelka has summarized the latest releases of the Austrian pop, rock and electronic scene. Among them are eight debut albums and one tape release.

Pauls Jets is the name of the formation formed by Xavier Plus, Romy Park and singer Paul Hochhaus. After their summer hit “Üben Üben Üben” was played up and down last year, the long awaited record of the likeable Viennese trio has finally followed. “Alle Songs Bisher” is a convincing debut album, full of bratty quirkiness and youthful nimbleness. The formation jumps subtly and without affectation between Indie rock and conversational pop. Here the houses can be crooked and the fish can dance. Mood brightening sound carried by witty language and whimsical style. Sparks fly here.

From the “Licht-ins-Dunkel” Gala to the opening of the Wiener Festwochen – the singer, composer and pianist Eva Klampfer has already performed on numerous stages at major cultural events. Her expressive voice and energetic performance are only some of the reasons she inspires the crowd as Lylit. With “Aurora”, the Salzburg-born artist now presents a refreshing EP in which she tells of longings, loss and separation. The songs are well-rounded pop songs, which are moving and accentuated like R’n’B and soul numbers, that display the broad musical spectrum of the singer. This powerful woman presents vulnerable side and dares to play in risky high pitched ranges. Warning: Goose bumps.

Susan Wolf’s album is also soul-oriented, although more classical. After a long break, the musician presented “I Have Visions”, an atmospheric album between country, soul and blues. Strokes of fate are the topic: it’s all about life, love and the disappointments they bring with them. Keynote: melancholic. Wolf has an incredibly precise and velvety voice and manages to strike soft nuances. There is a reason why associations with jazz clubs, red velvet upholstery and smoky piano bars permeate the album; the musician spent years playing jazz classics in hotel bars. She is accompanied by Mellotron and steel guitar. Songs that take us back-to-the-roots.

“Don’t forget who we are: a nation full of fighters, full of heroes, full of light” – cynical bubblegum pop that’s sticks to your teeth. With “Amsterdam”, the Simmering (red: a district in Vienna) based musician Simon Fanta goes on a search for identity. With the track “Raus aus Wien” he created a summer hit. The DJ and jazz student has had pop star aspirations for a long time. His debut album “Amsterdam” is built on good mood and stereotypes. Even though Fanta includes references to Bilderbuch and Wanda, his sound is smoother and has more club drive. Here pop songs meet jungle beats and R’n’B, Deutschrap and Wiener Schmäh (red: typical Viennese humour). Between dreams of coke, Hollywood and “really hot chicks”, you can also find syrupy-sweet love songs.

“Wieso kann niemand mehr denken?” (Why can no one think anymore?) Yasmo asks. The MC and musician Yasmin Hafedh, who will also be co-curating the Popfest Wien this year, has both Flow and Brains. Her second studio album, which she produced together with the musicians’ collective Klangkantine, relies on profound lyrics. In them Walter Benjamin and the Bling Bling culture of US hip-hop is confronted with its own precarious reality. For years, Yasmo has countered the superficiality of the music business with self-determination and political consciousness and has been a strong advocate of solidarity. Her spoken word raps were fine tuned by poetry slams. Lyrics as articulate as on the stage of the Burgtheater. Klangkantine is as funky and big-band-like as usual.

The US-American-Israeli singer-songwriter and producer Noa Ben-Gur already won the Amadeus Award a few years back. On her EP “Drip” she presents soulful pop songs that both get under your skin and get stuck in your head. Although the tracks are addressed to a You, which she´s trying to get rid of, they have nevertheless become cheerful, positive songs, full of playful twists, carried by dreamy funk instrumentals. A little emotional exhibitionism seems to do the trick, and the message is clear: “You gotta love your self, just love yourself.”

Catastrophic, atmospheric post-rock – With “love life death” Cayes present an – as the title already suggests – existentialistic debut EP. The artwork as well as the music videos are consequently kept in black and white. The duo formed by Julia Schwarzer and Ronald Dangl knows how to transfigure. They celebrate the world’s aloofness and inscrutability. The vocals are phlegmatic and mysterious, the pulse sluggish, the guitars are deliberately scratchy. The result sounds suicidal. There is no escape, no relief. A remote island for lost souls. Lana del Rey’s Sadcore sends its regards.

If the word idiosyncratically can be applied to anything, then it is his projects: the congenial artist musician Clemens Denk has built a new home for himself with “Wirtschaftskammer” and populated it with illustrious guest musicians such as Martin Lehr (Luise Pop), David Wukisevits (Nino aus Wien), David Öllerer (Voodoo Jürgens) and Jasmin Maria Rilke (Aivery). Denks minimalist wordplay nestles between caviar and generic products. Bills don’t just pile up here, but also self-doubt, but it is not that bad. The financial movements are captured in an anti-capitalist art post punk and wander in the direction of free jazz, while Denk’s vocals crumble downwards. A crazy concept album that blocks itself against any form of exploitation. “The door is closed. Is this even my house? Is that even a house? The door is closed. I can’t get in. The door doesn’t open.”

Oh sweet melancholy, oh gentle transfiguration: “Baby” is the name of Bobby Would’s debut album. The album contains both unpretentious and touching “Rock’n’Roll Lullabies”. Underground-Hero Robert Pawliczek, the man behind Bobby Would, has orientated himself on an impressively simple composition principle. Snippets from Crooner-Oldies and Rockabilly-Evergreens were used to build loops, to which the musician sings and plays guitar. The result sounds irritatingly homogeneous. They are newly turned, quasi appropriated LoFi downtempo songs and charismatic lone-wolf numbers – an insider’s tip for all those who suffer from wanderlust and like to imagine themselves in different eras.

The third artist musician release comes from Lowlands – the project of Brainmanagerz singer Stephen Mathewson and ex-Kreisky bassist Gregor Tischberger. Lowlands, who probably share their name with a whiskey brand for a reason, don’t care much whether something is appropriate or pleases. The drums get lost in hardly recognizable rhythmic patterns, the voices fall through, it shakes, rattles and rolls – everything is just a tick off. The sullen spoken-word as well as the instrumental parts testify to the uncompromising expressiveness known from prime-outsiders like Daniel Johnston. Lowlands embody the creative “fuck it” attitude in a pleasant way, seek beauty in chaos and orient themselves on the art and anti rock of the 1980s and 1990s.

With his solo debut “Widerspruch”, Markus W. Schneider, guitarist of the formations B.Fleischmann & Band and The Friendly Guitar Trio, presents a restrained but profound singer-songwriter album which tells of personal setbacks and surreal events. The guitar is ethereal and provides the atmospheric background for the lyrics, which are written by the musician. They are honest, unobtrusive German-language songs that are as sensitive as they are intrepid and seek their way between experimental and song form. A varied solo-debut by a versatile musician.

The busy musician and FM4 host Christian Fuchs surfs the rock noir wave with his project Black Palms Orchestra. With his second album “Tropical Goth” he delivers tracks that have taken a lot from HBO and Netflix series soundtracks. Here Fuchs stages himself as the protagonist; as an experienced anti-hero and bad boy, a fusion of Nick Cave, Dave Gahan and David Duchovny. Here the men still have the blues, the women are blonde angels, the sky is wide and the roof of the car is down. Besides the frequent “oh yeahs” there are also many guest musicians on the album, such as Jonas Almqvist, Monsterheart and The Happy Sun.

Churchpenny Allstars are true rockers: musicians with beards, plaid shirts and chest hair. They know that they are masters of their craft, and they refer to themselves as the “reincarnation of legendary rock gods”. While they ponder about women, liquor, and life, guitar and harmonica battle for supremacy. The groove is there, the catchy melodies too. The result is a convincing assemblage of the testosterone-impregnated genres Hard- and Stoner-Rock, Country and Progressive Metal. Let’s roll!

This is where three knock at the gates of hell: “Dun Field Three” is the name of the newly formed formation of Daucocco (guitar, vocals, keyboards), Nachtlieb (bass) and Goto (drums). On the self-titled debut album, the trio is as self-confident as if they had been around for decades. Together they bob and weave and dance and thrash and celebrate our doom. No sound is too much, nor too little. The sound is massive, but straightforward and sounds like a crazy melange of carnivalesque funeral march, rock’n’roll romanticism, Americana Voodoo and Variéte Noir. The Tiger Lillies send their greetings.

With Mia Zabelka, James Plotkin (Sunn O))), Khanate) and Benjamin Finger, three international Minimal-Drone experts have come together. On guitar, e-violin, synthesizer and piano they search for the “Pleasure Voltage” and create clouds of sound in which one as a listener gets lost. The abstract loop landscapes bore their way into the subconscious, feel their way forward, dig deeper. Immersion is the keyword here. Gentle ambient psychedelic somewhere between dream and memory.

Shilla Strelka – translated from the German article by Dave Dempsey.