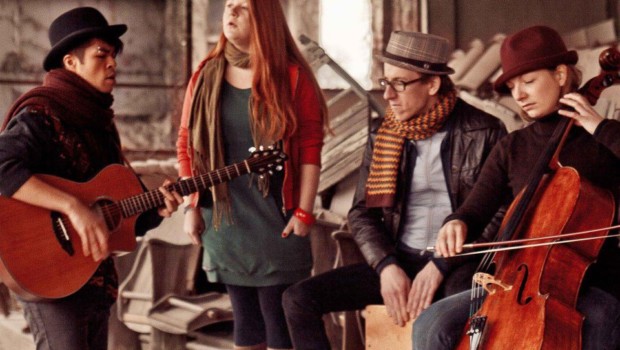 A guitar, a cello, a cajon and two voices are the instruments of choice for the Vienna-based acoustic folk band DAWA. After numerous jam-packed concerts at various local concert venues and festivals, the four-membered band, consisting of Laura Pudelek, Barbara Wiesinger, Norbert Kröll and John Michael Dawa, has been able to establish a profound loyal fan base and has found a label home at Las Vegas Records, which just recently released DAWA’s debut album “This Should Work”.

Prior to the new album, DAWA self-released and self-distributed their first EP with the almos programmatical title “All We Need Is Patience”. Listening through the tracks of this EP, it is without a doubt that all the patience and effort definitely paid off. Back then the popular Austrian radio station FM4 already predicted: “…the band DAWA. They make music that touches […] DAWA may not have a label yet, but that will definitely change once the label people hear their music.” Now available at Las Vegas Records is their highly acclaimed first album “This Should Work”.  Looking at the band’s chosen titles, one question comes to mind: are all their titles self-fulfilling prophecies? In any case, the consensus of the positive media response leads to the conclusion that it actually worked!

The music of DAWA is settled somewhere between folk and rock and echoes with a dreamy and optimistic undertone from the speakers. The primarily soulful and mystical sounds of Laura Pudelek with her cello, as well as the driving percussions of Norbert Kröll, create the musical foundation that is layered with the enticing soulful voice of John Dawa and the seductive smoky voice of Barbara Wiesinger, manifesting it into a sonic whole. DAWA prove that they have a sure feeling for beautiful melodies and that they know exactly how to express their musical visions in thoughtful and exciting arrangements.

Everything about DAWA seems to make sense. The Viennese band is confident and independent enough to not submit to current mainstream pop sounds – indeed more of a rarity these days. Thanks to the convincing quality of their songs, DAWA have long lost the status of being an insiders’ tip and are sure to soon conquer the music world beyond Austrian borders. Next chance to experience DAWA live in concert is a showcase at the upcoming Reeperbahn Festival in Hamburg.