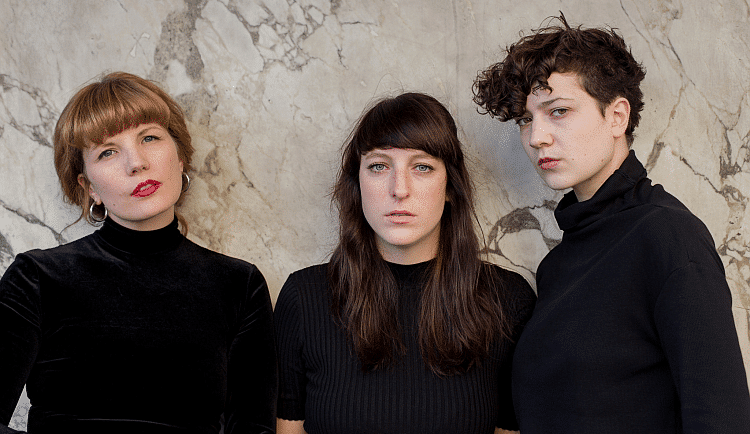 The first album, their own music video,”FM4 Soundpark Act” in the month of November, a multitude of gigs in Austria and a first short tour through Germany: 2017 kept the surf rock and garage-punk band DIVES very busy. With new video plans, a fresh song and lots of concert dates including a show at the prestigious c/o Pop festival in Cologne, it looks like the year 2018 will be just as promising for DORA DE GOEDEREN (drums), VIKTORIA KIRNER (bass, vocals) and TAMARA LEICHTFRIED (guitar, vocals).

At the first gig of the year, which took place at the beginning of January in Vienna’s compact Café Stadtbahn, the Facebook event page of the concert counted more than 700 people interested. Many a fan who had come to listen the DIVES that night was denied this wish. In view of the successful album release show, which had taken place only a few weeks before at the fluc in Vienna, that isn’t surprising. The self titled mini-album, released under the label Siluh Records and produced by Wolfgang Möstl, helped the DIVES make a name for themselves. A name which is greater than the capacities of small free stages.

DIVES concerts give the impression of a of a well-oiled team. Occasional changes on the instruments and the microphone make it clear that either none or all three of the musicians are perceived as “front woman”. The three are equals. Not only on stage, but also in songwriting. “Not one person writes a song, so that the others only have to bring it to life with their instruments. We all provide the same creative input,” says Viktoria Kirner. Even though – or maybe even because – they all play in other bands, the three of them have found an unmistakably unique style: “We are on the same wavelength with the music that we make”.

A nice metaphor. After all, DIVES are not only Garage Punk with indie pop elements but also “Surfrock”. Strong guitars and drums, a subtle bass and a bright voice, above or below which a second is layered again and again, make this common wavelength clearly audible and perceptible. Ranging from cheerful to gloomy, the mood frequently established with only a few notes, the DIVES‘s melodies let the listener’s thoughts roam free.

DIVES’ songs aren’t feel-good music. But they aren’t overburdened with exaggerated meaning, either. They are easily accessible and yet not banal; energetic and emotionally charged, sometimes hard, and sometimes sensitive, but without a penchant for melancholy. For example, the often repeated line “How can you feel when your hearts are made of stone?” in the number “Tomorrow” does not sound kitschy or sad, but rather powerful and honestly curious. These parallels aren’t forced compromise, but rather characteristics of a style that makes DIVES and their music catchy and unique. Music, lyrics and optics – the latter relating to album covers, video aesthetics and stage appearances – produce a coherent overall picture. One that is mysteriously elegant, with no unnescesary frills, but never simple. The concept is also reflected in the title of the album songs, which all have one-word names: “Shrimp”,“Concrete”,“Roof”,“Tomorrow”,“Drum”,“Squeeze”.

With so much harmony, one could think that DIVES have been playing together for many years. In fact, Viktoria Kirner, Dora de Goederen and Tamara Leichtfried met in 2015 at the Pink Noise Girls Rock Camp in Linz. A camp in which young women and girls spent a week playing music together and performing a concert together at the end. “The main goal of the camp is not to produce bands. That’s actually just a nice side effect. The main goal is the musical empowerment of young women. But also to create an atmosphere that enables them to try out and create what they like,” says Dora de Goederen. “To be allowed to stage yourself, to present yourself on a stage in the way you want, is associated with a risk. But it also means power and possibility.”

The band project survived the Girls Rock Camp. The three musicians approached their work together with a high standard of professionalism. “We had high expectations of what we were doing from the very beginning. That’s why we spent almost nine months in the rehearsal room before we performed again after the camp” explains Tamara Leichtfried. It was only during this time that the name DIVES was created. It represents SCUBA dives, dive bars, and also evokes surf-ruck associations. Wherever your DIVES will lead you – it will be exciting.