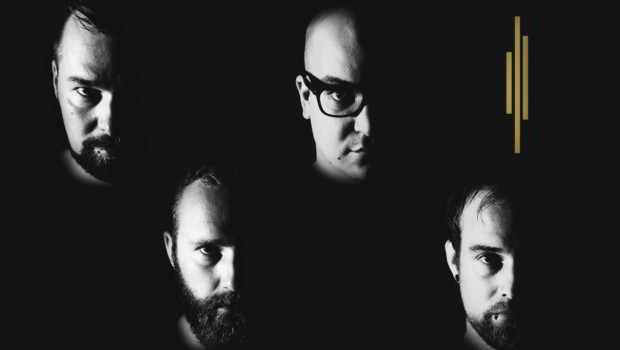 “IN THE END IT’S ABOUT MUSIC, FOR THE LOVE OF MUSIC”

One could almost call them the dinosaurs of the Austrian subculture scene, but whatever the case DOOMINA are the figureheads of the Austrian post rock scene. The fourth album “Orenda” (Noise Appeal Records) by the Carinthian quartet proves their status as well as their mastery of tension and dynamics in that instrumental genre. The founding members DANIEL GEDERMANN (guitar) and CHRISTIAN OBERLERCHER (bass) talked to Sebastian J. Götzendorfer about fine-tuning, expectations, and unifying forces in the collective.

With some distance now to the recording process – how satisfied are you with your new album “Orenda”?

Daniel Gedermann: It was all quite a journey … We started recording in February 2017 in Vienna, the recording itself took three or four days. The mixing took some more time and at the end of 2017 it turned out that we had to re-record all the guitars.

What was the problem?

Daniel Gedermannn: Originally we wanted to record the whole album live. Unfortunately there were some technical problems with the guitar tracks. That led to us recording the guitars all over again as overdubs at the “PEGEL Studios” in Klagenfurt. But in the end this whole process led to a sound and an album that we are more satisfied with than with any of their predecessors.

Christian Oberlercher: It is certainly the album we are most satisfied with. I’ll be happy to listen to it in two years! Objectively speaking, it’s certainly our best album – in terms of production and quality.

But it is difficult to be objective when you recorded the album yourself.

Christian Oberlercher: I know, I know. That’s up to you, to believe or not to. In any case, we are more satisfied than ever before!

Musicians often don’t like to be assigned to a certain genre, but you can certainly be assigned to the post-rock genre in the broadest sense. Originally, this genre set itself the goal of renewing the rock genre – but nowadays it seems a bit stuck and many things sound as if they could use some renewal themselves. How do you see it?

Christian Oberlercher: There are definitely a lot of bands playing this blatantly standard post-rock. Some of them are a bit stuck or create the beautiful sound surfaces and tremolo guitars with great conviction. We´re trying to do our very own thing. Assigning a genre to ourselves is always difficult … Post-rock: Yes. But we still try to stand out from the crowd.

What is noticeable, for example, is the distinctive role of the electric bass.

Christian Oberlercher: I ask you to write that I am victoriously raising my fist.

Is it because you’re both the founding members of the band?

Christian Oberlercher: I think that this perception is primarily due to the fact that you can finally hear the bass well in the mix. This time the bass is finally where it’s supposed to be.

Daniel Gedermann: And regardless of the sound: You sometimes do more with your bass than I do with your guitar, as far as melodies and so on are concerned.

Christian Oberlercher: I try to tell my own story on the bass, and I think it works quite well by now.

“Orenda” is now the fourth album. Do you have the feeling that you have changed a lot or is it more a continuous refinement of your already existing style?

Daniel Gedermann: There was quite a difference between the first and second album, because the first one was much more aggressive. But overall it’s probably a process of refinement.

Christian Oberlercher: Songwriting became more sophisticated and sensitive over the years. We certainly have our basic style – which we have retained – but also developed it in our own way. But it’s up to the listener to decide whether it’s a forward or a backward development.

You are rooted in doom metal. Do you still feel like you’re in the harder part of post-rock or rather in the softer realms? Because this juxtaposition is formative for the genre.

Daniel Gedermann: I’ve never really thought about that before. Of course, a lot of things are up to the music taste of the individual, ranging from fragile neoclassics to the hardest hardcore. So there is a lot covered.

Christian Oberlercher: I don’t necessarily see us heading in one direction either. All bands in this genre love the tension of the compositions. It makes up everything. The combination of the melodic parts and the harder outbursts and just how these parts interlock.

How did the title of the album “Orenda” come about? Is it just because it sounds good or is there more to it?

Christian Oberlercher: What title do you give a piece that has no text? You just play the songs over and over again and at some point you get the feeling that certain songs sound like certain things.

“IN OUR BAND, WE’RE VERY FIXATED ON PLAYING TOGETHER AS A COLLECTIVE”

All right, then. But “Orenda” is not necessarily an everyday term.

Christian Oberlercher: Yes, well. We picked up this term, it sounded good and then we looked up what it actually means. It’s about the unifying power that unites all living beings. In our band we are very fixated on playing together as a collective.

Daniel Gedermann: So Orenda also stands for the chemistry among the band members.

Christian Oberlercher: Yes, exactly, the musical chemistry. Just as it happens internally between us, we hope that it also happens between us and the listeners, be it on the album or at a concert.

Christian Oberlercher: In any case, our concerts are our great strength.

To briefly stick to the subject of naming: In your web presence you will find the statement “Doomina is just a seven letter word”, which is of course funny. How much room for fun is there in this quite serious genre of post rock?

Christian Oberlercher: Of course! Take a look at the different titles of Mogwai. Many are extremely funny.

Daniel Gedermann: You just shouldn’t take yourself too seriously. Perhaps this becomes clearer and clearer the older you get. Of course, the name “Doomina” comes from the time when we founded ourselves as a doom metal band thirteen or fourteen years ago.

Christian Oberlercher: Originally the pun was even more fitting. Despite the change of style we still kept the name, because it’s still funny [laughs].

“Orenda” is your second album on “Noise Appeal Records”. How do you feel about working with the label? Did it help your career?

Daniel Gedermann: Yes, definitely. Dominik [Uhl, owner of the label; note] is a wonderfully uncomplicated person who does everything with dedication. “A klassa Bursch”, as we would say in Carinthia.

Christian Oberlercher: He does it for the love of music and vinyl. So we have definitely landed ourselves a lucky find.

What are your expectations regarding the new album, especially in the subculture and in such a niche genre as post rock,?

Daniel Gedermann: Simply playing in front of as many people as possible. To be able to make a living from music was never necessarily our main thought behind it. It’s more about spending a lot of time on stage and having a good time.

Christian Oberlercher: In the end it’s all about music for the love of music.