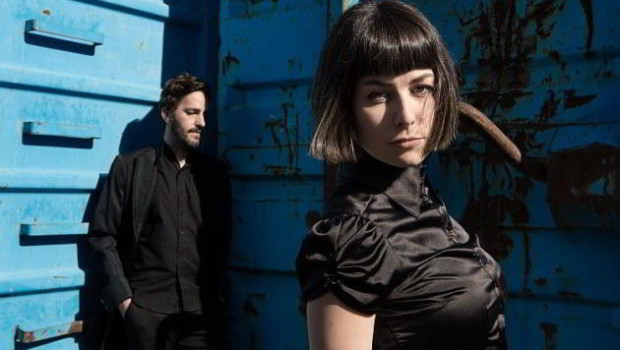 Pop music with a dark note and captivating depth: “Libra” (Fabrique Records), the first EP of the Viennese duo DRAMAS, is a successful debut that holds enormous promise for great things yet to come.

“Libra” is only three songs long. But those three songs are enough to get an idea of the strong songwriting qualities of this duo. On their debut EP DRAMAS rely on the rather dark sound of electronic pop, a soon which stands out beautifully from standard pop fare. The Viennese pair, which has existed since 2016, lets it swing melancholically, mysteriously, and dreamily in their songs. They avoid unnecessary decoration and focuses instead on more depth and feeling than is otherwise presented in the world of pop.

SONGS, THAT TOUCH AND EXCITE

Singer Viktoria Winter and producer Mario Wienerroither are the two minds behind DRAMAS. They prove to be a perfectly harmonious team that knows exactly how to transform music into a really exciting and atmospherically condensed affair. They do it in a refreshingly relaxed way with just the bare minimum – a few piano sounds, airy synth passages, playful electronic riffs and discreet beats. “Libra”, “Mess” and “Wheel”, the three very different songs of the EP, develop a strangely fragile power, one which grabs you with a gentle but firm hand and lifts you up emotionally.

DRAMAS is still a kind of insider tip. Which they probably won’t be for much longer. Anyone able to write such strong songs as Viktoria Winter and Mario Wienerroither can’t go unnoticed for long.