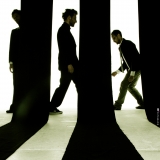 Although the local club culture has become somewhat static, it still can surprise in the formal aspect. No project can illustrate this more vividly than Elektro Guzzi. Playing the idea of ​​techno with the means of a classic line-up was first conceived as a joke. But those who have experienced Elektro Guzzi live, know about the energetic qualities of the trio. Not to mention the ludicrous image-sound-gap which is developed in their performances.

When asked about how to perceive the formal self-image of  Elektro Guzzi, Bernhard Breuer has a quick and clear answer: “We definitely see ourselves as a band and have always worked as a band”. The studied jazz drummer shares an academic approach to the instruments with his band mates Bernhard Hammer (guitar) and Jakob Schneidewind (bass). For the last four years, the Viennese band with the love of instrumental virtuosity have been performing as a trio. The fact that it took far longer to develop the initial quirky idea into the now highly accurate sound is obvious. The acoustic venture already began in 2004. The musical socialization of the Elektro Guzzi members is less based on an electronic foundation, but rather stems from traditional rehearsal room sessions. Breuer: “I used to make punk and noise music.” Techno in its purest form will be rarely mentioned as a major influence of the band. The Elektro Guzzi members feel rather at home in experimental music. Keyword: Mego. Not only socialization-wise, but also relating to the working process. The development of the band that has found the self-designation of a “techno-dance band” as an apt description, is to be recognized as a sound experiment. The band has been tweaking and refining their sound in the rehearsal room over many years.

The way out, towards the audience, was first pursued when the band was sure about a homogeneous and coherent form and content. That is why it took until Spring 2010 for their first album to appear and hit corresponding waves, whereas the record debut still fell back on the skills of a well-known techno musician: The prestigious genre-hopping Viennese techno icon Patrick Pulsinger collaborated on the unusual production as a producer and mixer. The album was recorded in Pulsinger’s Feedback Studio of Oliver Brunbauer. Elektro Guzzi did not only rely on proven methods in the creative process. With a contract at the prestigious Berlin Macro label, there is also a very ambitious approach on a structural level. The unusual idea and the formidable sound implementation are only a few of the reasons why Elektro Guzzi have long outgrown the local concert scene. On the occasion of the debut album, the tour schedule led the trio to the most famous clubs on the continent. Their performances at the Berlin Berghain, the London Fabric and their trip to Barcelona for the major music festival Sónar speaks for itself. The overall quality of the band especially unfolds in the live situation. The analog approach with guitar, bass and drums can safely be described as creative purity. All sounds of minimal techno, including well-dosed dub sprinklers, droning from the speakers are exclusively generated live.

“No computer, no pre-recorded loops, no solos” is the promise of the official band info in an impressive and proud formulation. This also applies to the studio work. For this reason Elektro Guzzi enters into an artistic vacuum that has hardly been realized by anybody but this band. The increased laptop involvment of the new millennium and the consequently fortified need for musical skills are non-negligible parts of the success of the band concept. It is only logical that one year after the debut album the band released a live document of their work with “Live P.A.”. Almost simultaneously, they also released new studio material with the EP “Extrakt”, again created in collaboration with Patrick Pulsinger and released via Macro. 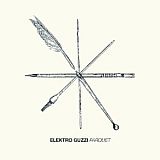 As if that wasn’t enough, these guys are really serious when it comes to hard work. They just recently also released their second studio album “Parquet” and one can once again speak of a new masterpiece, which will help the band in gaining even greater popularity. In terms of visionary and creative work, “Parquet” is new impressive evidence of what is still possible in the field of techno.