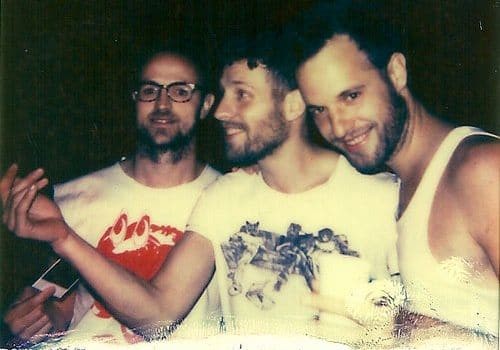 There are not that many local bands that have been as praised and showered with so many superlatives on a national and international level as the band Elektro Guzzi. However you like to call the style of the three-member band , in whatever category you wish to push them in, no one really seems to hits the right spot. The music that Bernhard Hammer, Jakob Schneidewind and Bernhard Breuer fabricate, goes far beyond the often attributed concept of techno. Elektro Guzzi is an experience as a whole, an expression of suspense held from the very first to the last note, a steady and ongoing, almost hypnotic densification of moods in a danceable musical context. “Allegro” (Pomelo), the title of the new EP, produced once again by Patrick Pulsinger, is an exceptional and stunning example on how you can achieve maximum impact with seemingly few resources and almost inimitable playful precision.

Without doubt, you may call Elektro Guzzi a phenomenon. Already hailed and celebrated in numerous prestigious clubs and at almost all important festivals in Europe, the Viennese trio mastered the leap onto the international stage with flying colors. And rightly so, the musical approach that Bernhard Breuer (drums), Jakob Schneidewind (bass) and Bernhard Hammer (guitar) follow  in their sound is completely different to conventional standards. It is not only about the matter of coming  up with the idea of playing traditional techno on analogue instruments, it is the way how Elektro Guzzi interprets and forms the music, which is completely out of the ordinary. 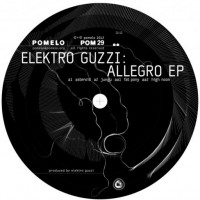 Elektro Guzzi understands how to celebrate the art of minimalism, which, while closely listening to their music, turns out to be extremely complex. Eventhough the discreetly placed finesse is hidden in the background, it is still physically tangible. The music is somewhat hypnotic, while enfolding something permanently flowing, as well as an undefinable and compelling austerity. It is the repetitive and hidden details, nuances, moments, such as a metric shifted melody, a short implied chord progression or the minimalistic beats that capture the listeners and carry them off into an even deeper atmospheric and multilayered sound universe.

[…] Bernhard Hammer, Jakob Schneidewind and Bernhard Breuer are clearly at the peak of their prowess and well on the way of making Elektro Guzzi the most radical dance band of the decade.
(Elektro Guzzi / Press Text)

Regarding live performances, 2012 has been a very busy year for Elektro Guzzi with already more than 50 concerts, most of them in Europe (especially in the Netherlands and Switzerland). Currently Elektro Guzzi is  getting ready for two very special highlights: a two-week tour in Mexico and three concerts at the Airwaves Festival in Iceland. As if that were not enough, there are also new plans for 2013. There will be a few releases in February coming from their regular label Macro in Berlin and the English cassette label Tapeworm. Above that, there are also some Summer recordings with Cuban percussionists from the Glatt&Verkehrt Festival that are waiting to get finished and released. Concert-wise, plans include a small tour in Japan and possibly South America.
Michael Ternai
(translated from German)