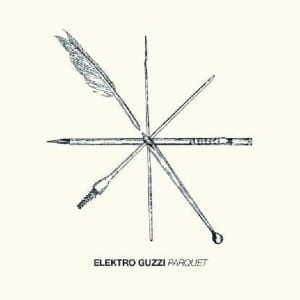 Elektro Guzzi deliver one of the most thrilling live performance models for techno and an innovative leap in the art of band performance at the very same time. It’s almost the antithesis to what a band is supposed to be. While they use guitar, bass and drums only, they take the most unusual playing techniques and put them together into a rigid mechanical form where it all makes instant, evident sense. Yet, if they had not performed live extensively, becoming audience favourites from Mutek to Sónar or Berghain to Fabric, it would be hard to believe this is really how the music is created. That said, everyone who saw them deemed it impossible they could go even further into the man-machine direction. Yet it is exactly what they did.

‘Parquet’, their second studio album sees them in an unprecedented monomaniacal techno mode. Throughout the 9 tracks the distinctions between instruments and roles are totally vaporized. While their instrumental approach is at the core of their aesthetics, it really doesn’t matter anymore if one sound comes from a guitar or bass or drum – it has all been merged into one sonic unit and all there is, is the music as a unified entity. While all the qualities of live performance are at hand – real time interaction, visual plausibility, instant minuscule adaptations – it is a radical break with what group performances have been about so far.

‘Parquet’ is as much a straight up club music record as it is rich of nuances and details. Astonishingly, while being their most rigid and dance-centered work to date, it also holds outbursts of beauty with tonal lines, ringing overtones and warm resonances. The rhythms are stripped down to the core and structured for affecting longer stretches of perception. Every track comes with a distinctive, almost “branding” feature – like the hypnotic meter-shifting line of ‘Affumicato’, the gated chords of ‘Pentagonia’ or the abridged rhythm of ‘Absorber’. Actually, it all was recorded directly to analog tape. No edits, no overdubs. It’s the man-machine in real time and a hint at the love Elektro Guzzi put in the process. You probably have to be as dedicated as Bernhard Hammer, Jakob Schneidewind and Bernhard Breuer to take things that deep.

‘Paraquet’ is available via CD and two 12″ vinyl