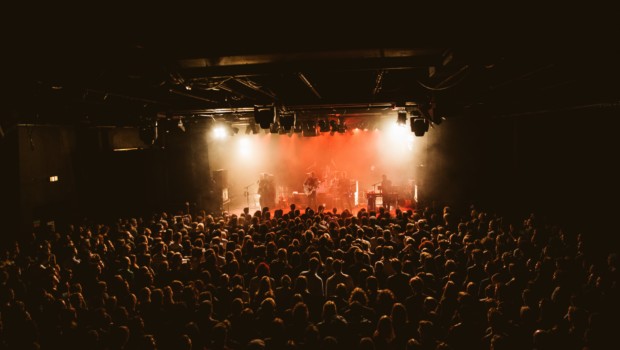 Since 2006, Europavox Festival (Clermont-Ferrand/France) is entirely dedicated to the promotion of European musical diversity. The internationally renowned festival celebrated its 10th anniversary in 2016 and brought together 6 partners from 6 different countries to design, carry and deploy the Europavox Project. On Nov 4, this initiative made a guest appearance at the Viennese WUK with the premier of “Europavox Project Vienna”. The sold out debut-event highlighted the musical landscape of Europe by featuring 3 diverse artists, STEAMING SATELLITES (AT), OLIVIER HEIM (PL) und GIUNGLA (IT). Dave Dempsey interviewed project director Katia Clot and Hannes Cistota from WUK about the project and the kick-off event.

BELIEF IN THE EUROPEAN IDEAL AND PLANS FOR THE FUTURE

This is the very first event of the Europavox project, which got its start as the Europavox Festival which has been taking place for several years now. How did the festival itself get started?

And now it has expanded into actually being a Europe-wide project, includes multiple countries and will be taking place in those countries as well. How did this project get its start?

Katia Clot: It’s true that it started as a local project, but it was a collaborative project. Europavox has deep roots in it’s territory, but it has been built up with a network of European professionals and European journalists that have followed this project since the beginning. Europavox is open to Europe in its DNA. Now we had the opportunity to build up a project that really emphasised the European area. So now we have seven different Europavox Festivals in seven different countries.

So that means seven different countries providing bands for the festivals? How did you go about selecting the bands that would participate?

Katia Clot: It was the same way that we built up the lineup of the Europavox festival in the past. We have an artistic coordinator that of course does his job and goes to showcase festivals to identify bands, and now he also asks the journalists in our network as well as the artistic directors from the seven partners to make suggestions. He built up a common resource and shared it with the partners. It is really a collaborative way and quite original and quite distinctive.

It’s not just a music festival though, what else is behind the name Europavox Project?

Katia Clot: The Europavox Project is a project about the circulation of European artists and professionals in the European continent. Our core job is to produce concerts. But the opportunity that we have with the project is to diversify our activities, and also to build a new path, and digital is one of those paths. Journalism and media is one of those paths. That’s why we intend to launch the first online media dedicated to European musical diversity. There will be a special event to promote this new media during the next edition of the Eurosonic festival.

And how is this all being coordinated?

Katia Clot: (Laughs) Well, by a team. I am coordinating the team. We have a mirror organisation in each partner country contributing to the project. We have different competencies that are shared through the entire project.

Austria has been lucky the last couple of years, many of our artists have been able to make an impact on the international stage, particularly in the German speaking countries. What has your experience been with other countries and their receptiveness to relatively unknown European bands?

Katia Clot: This is hard to say. First, it depends on the music industry. In the industry you have different organisations, people who work in the live industry, people who work for the record industry, some territories have export issues, and some don’t have those issues, so it is difficult to get an overview or see big trends. Europe is a continent, Europe can be a country in a way, but we have to focus to keep in mind that each region has it’s specificity. It is hard to say “Well, this is the way it works”. There is no one way, there are thirteen ways.

Do you have any more details on the digital players that you are cooperating with?

Katia Clot: There is something I didn’t tell you about the digital aspect that is quite new. We wanted to open our activity to innovative digital startups that are starting to prototype projects and that need to be connected to reality. The idea is to select some European startups through pitch-sessions, to talk to them and tell them what our professional issues are and to give them the opportunity to make mistakes and to experiment on our activities. That’s the main thing. And we have different issues sourcing the startup, it’s not easy to do this, build up a methodology to go with them into these experiments, and to evaluate what they are able to do or not able to do and what corrective actions can be taken afterwards.

And what is the ultimate goal of the project?

Katia Clot: (laughs) the final ultimate goal! Well, circulation of artists, building capacities for professionals, address the European continent as a market. These are the three guidelines to the same objective: to live the cultural diversity of Europe.

CAN IT GET ANY BETTER THAN THIS?

Hannes Cistota is responsible for music booking at WUK, and responsible for the Austrian side of the Europavox Project. I talked with him after the show to get his take on the event and what we can expect in the future.

How was the kickoff?

Hannes Cistota: I think it was a huge success for the festival. It was the first time it took place in Vienna and it was sold out and the people had fun, and so did the bands.

There were a surprisingly large amount of people from the very start. How did you manage to get so many people to show up so early for a first event of this sort?

Hannes Cistota: For me it was also a surprise. And also for the bands. Maybe people are used to it from the JaJaJa festival so they trust us. And so the people showed up early to see new bands. I think it was, for Vienna, something special.

How many people showed up?

What was the highlight of the night for you?

Hannes Cistota: I think it was the Italian opener, Giungla. I just heard her once and she is hyped, a lot of people talk about her, and I think she has a huge potential. It was a great concert.

How did the bands like it? Were they happy with the event?

Hannes Cistota: I had a chance to talk to the bands, and they were really happy, because they want to play other venues, and Europavox gives them the chance to play in Lithuania, in Brussels, in Italy and France, and that is great for the bands.

What is your next step in the project?

Hannes Cistota: The next step is to go to Brussels in December with Ogris Debris. Botanique, a huge venue there, booked Ogris Debris for their Europavox night, and I think it will be a huge success for the band. I think a lot of people will show up and I am really looking forward to it.

How is WUK going to be involved, what will WUK be doing for the next stages of the project?

Hannes Cistota: We are planning the next festival in Vienna next year, and for me, I hope we can manage to do two days and bring more bands doing two stages. Because I think this project has the chance to grow, and next year we will also be bringing Austrian bands to France and Italy and a band from another country will come to Vienna. We take care of the band here for one week, its like we will be the godmother and godmother for the band.

What will you do with them while they are here?

How did you get involved with this project?

Hannes Cistota: It was five years ago. It was the first time I was invited to Europavox and Francois invited me because he knew my work in WUK, and we talked a lot. I also got to meet other promoters and venues there and we came up with this idea to do a thing together and that was Europavox Europe.

I am assuming you have had a chance to listen to a lot of bands that have been suggested for exchange. What is your big tip some of the other bands we will be getting a chance to see now?

Hannes Cistota: It’s a solo thing from France, I have seen him and he is really a nice guy, and the Slovenian band Repetitor. It’s a girl on bass and a girl on drums, three, like Hüsker Dü with girls, and it’s amazing. I have seen them twice and the audience went crazy. It’s like a mix of Hüsker Dü, Nirvana and something new. It’s really nice.

We know that Ogris Debris is the next Austrian band to go out, what other bands to you have an eye on exporting?

Hannes Cistota: Mavi Phoenix. I think she can grow and I introduced her to the booker in France and he really liked her. Also Wandl,  who – like Ogris Debris – releases on Affine Records.

What is the best possible outcome from this project for you?

Hannes Cistota: For me it is to bring new bands, not so well known bands to Vienna, and to bring an audience to them. I think the audience must be more open, because in the last years, Austria wasn’t so well known for listening to new bands. But in France people listen to new bands and are open minded to seeing and hearing new sounds. It would also be a success if an Austrian band is successful in France or in Italy. That would be great.