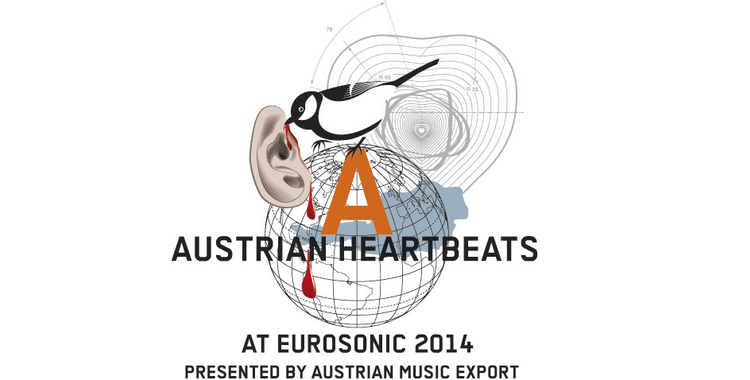 59.400 Heartbeats = 990 Minutes = 22 Shows of 18 Austrian Artists – Austria is the focus country at Eurosonic 2014!
The new festival seasons starts with an impressive presence of Austrian music in the picturesque old town of Groningen: showcases, networking meetings, panels and the Austrian Reception invite you to discover the current Austrian music scene and find out about its abundance of exciting new talent.

Austrian singer GuGabriel will present herself to the international audience as one of the winners of the European Border Breakers Awards (EBBA). (Wednesday, 18.00-19.30)
Bridging the time until the festival, the video blog collective They Shoot Music Don´t They presents several of the Austrian artists with intimate video portaits in the series “At Home Sessions“.

AUSTRIAN RECEPTION
On the 16th of January the spectacular City Theater of Groningen, the Stadsschouwburg, will be the venue for the official Austrian Reception and a performance by the Vegetable Orchestra. As representatives of Austrian Music Export, Tatjana Domany & Franz Hergovich invite all international delegates to join the Austrians for food & drinks & music.
Specials: DJ set by Richard Dorfmeister, Austrian wine tasting, Waves Vienna Festival Bar (Thursday,18.30-19.45, RSVP: office@musicexport.at)

AUSTRIAN NETWORKING BRUNCH
Austrian Music Export & Advantage Austria are organising an Austrian Networking Brunch with the aim to introduce key players of the Austrian music industry to their international counterparts. A unique possibility to get to know the main labels, bookers, festivals, agencies, media, managers and musicians from this country on the crossroads between East and West in an informal and relaxed atmosphere over coffee and cake. (Thursday, 11.00-14.00, RSVP: office@musicexport.at)

CONFERENCE
The panel discussion “From K&D to Dorian Concept – 20 years of advanced electronic music in Vienna” explores the Viennese scene with Richard Dorfmeister, Jamal Hachem (Affine Records), sound tinkerer Cid Rim, London-based journalist Florian Obkircher and Stefan Trischler (Radio FM4, AT).
With “Fuck The Atlantic Ocean”, a documentary about the South American trip of the Viennese musician Sweet Sweet Moon will be celebrating its world premiere in Groningen. Matthias Leihs, one of the filmmakers and member of “They Shoot Music Dont They” will also discuss how music and film can affect and inspire each other in a panel discussion with Hannes Tschürtz (Poolinale – Music Film Festival Vienna, AT), Aron Van Der Ploeg (The Missing Sync, NL), Ayke Süthoff (Vice, DE) and Susi Ondrusova (Radio FM4, AT).

Make sure to check your delegate bag for Austrian Heartbeats – A Contemporary Musical Travel Guide to Austria! This small book contains tons of useful information, interviews and essays on the Austrian scene.