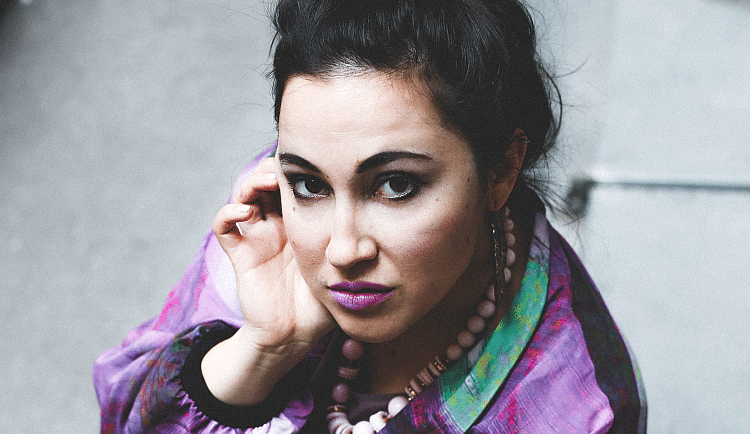 After SOIA brought a little bit of soul to the pale stages of Vienna in 2013 with the release of “Mood Swings” in 2013, the Viennese musician successfully established an independent mix of jazz and pop with  “H.I.O.P” (Record Breakin‘ Music) in 2016. Together with the producer MEZ she subtly whisks the listener away on a colourful journey that ended in an Amadeus Award nomination. Julia Philomena spoke with the artist.

This year was your first time being nominated for the Amadeus Award. Was the attention flattering, or was the competitive nature of the event just irritating?

Soia: The nomination for the “Best Sound” category was surprising and completely unexpected. It was the first time I visited the award ceremony in the Vienna Volkstheater and I had to laugh at the collection of quirky Austrians that were all collected under one roof. Watching young Zillertaler raising glasses with Alkbottle, it’s like being in a dream. Very surreal.

I was very happy about the recognition despite the circus atmosphere, though. It is nice when honest work is heard and valued. Especially since we aren’t serving the mainstream. Being heard by renowned critics isn’t something you can take for granted. We aren’t rock stars. Of course, it is my goal to continue to publish high quality records and play many concerts. But we are in a niche that, especially in Austria, isn’t in high demand. Classic jazz works well, the new wave of hip hop does too, but it is hard for the genre-crossing acts.

So in that sense, the nomination was a nice feedback. Specialists are working for the Amadeus. When they compliment you, it means something.

Did the nomination change anything for you?

Soia: The nomination was a great encouragement to keep working! For the last month, my producer Mez and I have been working on a new EP on which a lot will change musically. For one thing we decided against an LP in order to avoid the tedious and endless process and instead to focus on four or five tracks.

With a few exceptions it is much faster, more focused, and it is easier to maintain the enthusiasm. On the other we have a new motive, approaching the music more simply and to reduce more. We want to find the balance between jazz and pop that is more approachable for us and for our audience. Even though I wouldn’t describe our music as terribly complex, it is still very dense. Right now the most common phrase in the studio is “don’t stylise too much!” And that is particularly difficult for me. Gold plating simplicity is a challenge.

Do you have any role models?

Soia: Yes. My favourite band, Hiatus Kaiyote from Australia. I probably would have liked their most intense song, but it was the most simple song they published, “Nakamara” that really got my attention. That was my introduction to them, and I was able to get into the rest very easily. A lot of people had the same experience. The track was really successful and was even nominated for a Grammy in 2013. They managed to write a song that alludes to the genre but also worked in radio.

If you can do that you can reach a new audience that you can challenge because they will slowly begin to explore your world.

Nowadays being yourself already is political.

Nai Palm, lead singer and guitarist for Hiatus Kaiyote, is one of the few women in the music business. To what extent is the female quota in the business a subject for you?

Soia: I met Nai Palm in 2013 in Munich and asked her about which attitude, which consciousness she takes on stage. Whether performing in public as a woman had a political component for her. She said “Nowadays being yourself already is political”.  I can only underline that statement. A strong image doesn’t need a subtitle.

I really noticed the minority of women as part of the Amadeus Awards. So few women were nominated and not very many won. You can see this deficit in all areas of art and culture. Unfortunately it isn’t something I can change on my own, I’m just human. But as a female musician I can use understatement to my advantage.

Yesterday, for example, we recorded a new song for the EP with the title “Hoe for Love”. As a woman I can do a lot with dirty words. I like provocation in art, because privately I’m a good girl (laughs). I rarely sexualise things, and when I do, then subtly. Based on my clothing I could pass for a muslim woman. But when I use terms like “hoe” or “pussy power” in a feminist context it won’t be received as a cliche, but as a fighting pose.

Aside from public understatement, what function does music have for you?

Soia: Music is my release. My therapy that I can give to myself. If you let yourself get carried by the music, one thought gets carried to the next in waves. From that mood all of my songs are positive, even if the content can be a bit dark at times.

What serves as inspiration?

Soia: This morning I drank some coffee next to the chemistry lab at university. I watched a blackbird that wouldn’t stop singing. It was so beautiful that I forgot everything else, and focused my attention on that bird for the rest of the day. Those are moments in which I become completely calm, completely relaxed, focused and also inspired.

The song “Roaming deer” is also about animals.

Soia: The story behind that song is one of my favourites. One thing moved totally organically into another. Two years ago I dreamt that I found a dead deer in the forest. I ran to a flowing spring to get water and brought it back to the deer and saved it. You probably don’t need Freudian dream analysis to know that was about resurrection. Two days after the dream I drove out to my mother’s in the Waldviertel. I took a walk there and actually came across a deer, however a live one. It felt like in the dream, but more peaceful. A couple of days later Hiatus Kaiyote played in Vienna. That was then the final reason to write “Roaming Deer”. Nothing could have been more motivating…

The video for the song is thanks to Florian Bayer who I was introduced to by my actress friend Nancy Mensah-Offei. We got along well right from the start and wrote the concept together. In order to get as close to the dream and my experience as possible, we filmed it in the woods near my mother’s place. For the narrative we added a symbolic level with the two actors. Nancy is the dream that I am chasing and the man is the reality that is running after me. The dramatically burning bed in the snow at the end is my deliverance. Fitting to the end of the video we ate a deer that had been shot by the forest ranger for the wrap party. And that was the official end of the project.

You are currently working on another visualisation, for your track „Habibi“.

Soia: I wrote that song at the end of 2015. The trigger for that was my volunteer work at the Westbahnhof during the refugee crisis. That had a huge impact on me and my understanding of religion. In principal you can say that “Habibi” needs to be understood as a hippie song. It’s about peace, equality, and the message that religion is love. That’s why the Arabic title “Habibi”, which translates as “Lover”, fits so well.

Acoustically I wanted to tailor the sound to the lyrics. That’s why there are Kurdish samples, for example. The visualisation will continue with a similar mood. Funnily enough we filmed in one of Austria’s largest gay saunas, the Kaiserbründl.  You can look forward to that video (laughs)!

When I come to the studio and hear the first beats, thoughts and affective lyrics start to form in my head that eventually become songs

One could say that your videos are artistically created windows onto your life. How do the studio rehearsals and recordings work?

Soia: The synergy between private life and artistic tools isn’t just there for videos, but for music as well. When I come to the studio and hear the first beats, thoughts and affective lyrics start to form in my head that eventually become songs. Most of the time inside of four or five hours in which we work together without a break. It all happens very directly. My lyrics function just like my life. Mez produces, I write. Both quick and dirty. Expressionism is easiest for me.

How much has your musical expression and approach changed in comparison to your first concert at a school dance in Arena?

Soia: I stood on stage without any experience, a mere three months after holding a microphone for the first time. A big stage, to top it all off. That was strange. Especially since my band at the time was invited to be in the World Music Awards in Porgy & Bess. That was an undefined experiment, but one which I have always been able to say with certainty was very fulfilling. Music was always a joy for me.

Getting up in front of an audience on the other hand was difficult.

The early concerts were marked by insecurity and as a singer I envied the instrumentalists. They could hold on to their accordions, their instruments. But I am my own instrument. Every note comes straight from my soul. Every mistake is mine alone. If I don’t feel well, I can’t perform well. Confidence on stage doesn’t just fall from the heavens. I’m sure I’m not alone with that. Perhaps every artist is consumed by self-doubt. The lucky thing is that music feeds on difficulties, and particularly experience. Time provides advice. In my case it also brought satisfaction.

Aside from time and experience, what has helped you develop?

Soia: Thanks to my friends. There was never a manager, much less a PR agency. I have friends who gave me advice or made affordable photo and video shootings possible. Thanks to my artistic social circles it was just luck and learning-by-doing. In 2013 Mez and I were discovered by the U.S. “Record Breakin’” label and with their help we were able to release our first album “Mood Swings”.

But “H.I.O.P”, the last album, was also a big step. In October, 2016 it was released in the U.S. and Japan, and then on the 18th of November at the Café Leopold in Vienna. The album was well received and afterwards I was finally able to relax. I didn’t get active again until January and started to take care of promotion for it, after the fact. As a result I published a new video that was created at the end of last year in New York.

This revitalisation project worked well and gave me new energy that has proven helpful for the work on the new EP. I would be really happy if now someone in Austria showed some interest, for example a booking agency that would help us tour around the world.