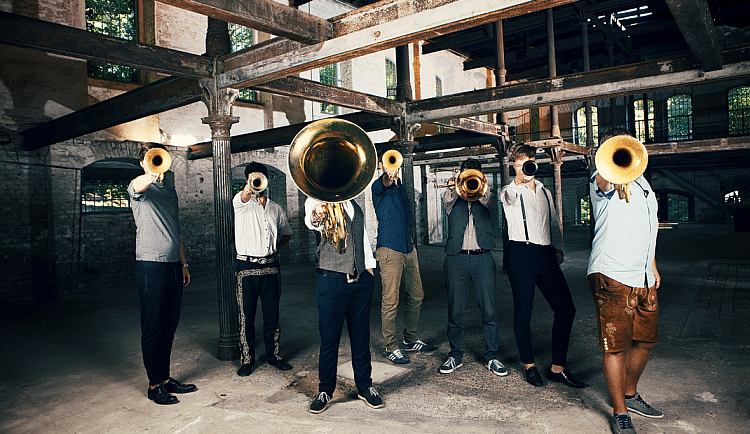 The Austrian formations FEDERSPIEL and RADIAN  received a very special honour this year. Both acts were featured on the best-of list for January 2017 from the Prize os the German Record Critics. The young seven member brass ensemble from Lower Austria  has now made it twice to the top of the list. “Smaragd” was listed in the the categories “Grenzgänge” (Borderlines) and Traditional Ethnic Music. The Viennese postrock-industrial-electronic trio also made it onto the list with a 2016 release. Their album “On Dark Silent Off”  made it to the top of the list in the “Alternative” category.

The jury’s explanation for Federspiel:

Massive and yet nimble, even more: lively elegant. The Wachauer brass band Federspiel are highly virtuosic. They serve up a portion of alpine folk music peppered with humour and delicate irony, mix world music and old-austrian sounds in 3/4 time. Zither and music box compliment the brass sounds while a synthesiser provides a breath of fresh air. The septet bubbles over with fantasy, adventurousness, and playfulness. They hum, mumble, whisper, yodel and sing their way to the highest realms. And it all goes down like a good glass of wine… (from the jury: Heinz Zietsch)

The Preis der Deutschen Schallplattenkritik e.V. is an Independent association of 156 music critics and journalists from Germany, Austria and Switzerland. The goal of the prize is to make the public aware of artistically exceptional CD and DVD releases. Organised into 32 panels of experts, the jurors judge the current selection of recordings on a quarterly basis in 32 different categories from symphony and opera to audio-book, cabaret, pop and jazz. They publish their best of list on a quarterly basis and also present an annual and honorable award as well as the “Nachtigall”.