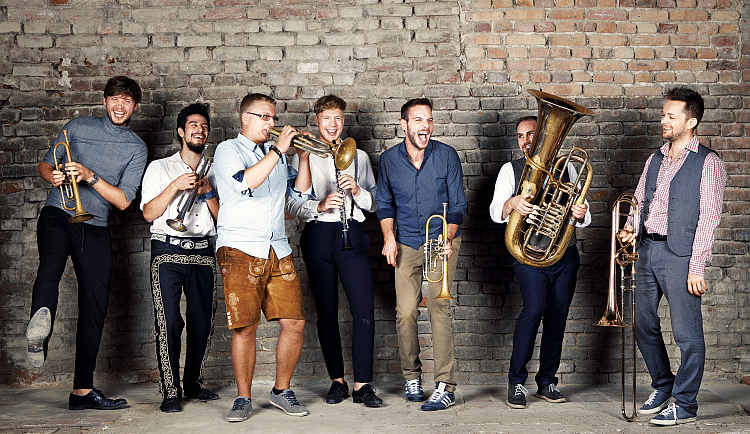 Federspiel were formed 12 years ago with the intention of combining alpine brass music with something more contemporary. Not long ago, on the 11th of November, they released their fourth album “Smaragd”. And it has taken them to the tops of the international world-music scene.

From the tiny local stage to the grand international stage, the brass combo Federspiel from Lower Austria have managed to accomplish that which many others never achieve. Finding an international audience. Many, many, sold out concerts around the globe and invitations to the most presitigoius world and jazz festivals prove just how far Federspiel have come. “Smaragd” is an impressive example of how they accomplished that development. Ayac Iuan Jimenez-Salvador (trumpet, flügelhorn, vocals), Frédéric Alvarado-Dupuy (clarinet, vocals), Matthias Werner (trombone, vocals), Philip Haas (trumpet, flügelhorn, vocals), Roland Eitzinger (tuba, vocals), Simon Zöchbauer (trumpet, zither, vocals) and Thomas Winalek (trombone, bass trumpet, vocals) have ignited, quite simply, a breathtaking musical firework.

MUSIC OF MANY LANGUAGES

Federspiel celebrate a dignified world-music sound in their pieces. One that begins with Austrian folk and builds bridges between many other musical traditions and melodies of the world. It can as easily sound dignified and classic as playful or jazzy. Soemtimes it sounds almost electronic, East-European or alpine. And every now and then elements of pop or other styles shine through, which makes the already diverse sound even more complex. The six brass musicians and their clarinett player take inspiration from everywhere and throw open the windows to an immense musical diversity.

“Smaragd” is a boisterous celebration. A laboratory of sound experimentation. It can have almost rock like moments. There is singing and yodelling, crying and even the occasional moments of surrender to the heavy and melancholic. And then it can suddenly switch to an impulsive russian dance. Federspiel have delivered an excpetional album, one that sets new standards and emphasises in big lack strokes just why Federspiel are where they are. On the top.
Michael Ternat (adapted from the German by Dave Dempsey)