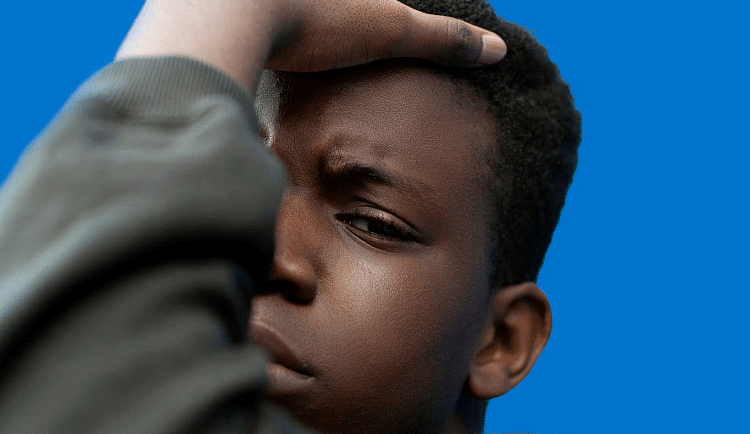 This is our first interview with SALUTE since the attack in Manchester. It is also the first one since he has started picking up steam. Everything is going well for the young musician from Vienna. The collaborations are getting bigger, everything is getting better. Although he has been living in England for almost three years now, he frequently returns to Vienna. He grew up here, was confronted with the ugly face of racism here, and in this interview he talks for the first time about the time he faced a knife attack here. In the meantime he has an excellent network of music friends and colleagues and a direct connection to Spotify. At the end of July he was back in Vienna to play as a headliner on the Seebühne at Popfest Wien. He told Stefan Niederwieser how he felt about all of that.

“Light Up” has almost two million plays, and salute 600,000 monthly listeners on Spotify. How did you achieve that?

salute (laughs): Really good timing. I started working on the song last July, and never stopped working it over. I was never satisfied and there are a lot of different versions. When my mother, father, and brother were all excited by it, I knew that it was finished. They have a “normal” taste in music. I knew that it would perform well, but I was completely surprised that it happened so fast. My next song is coming soon, and I have an even better feeling about that one.

A song with D.R.A.M., the EP, a Mix for Fader, a Banks-Remix and now Liv Dawson – the output has increased noticeably.

salute: Yes, I’m really getting into the groove of things, have a lot more discipline. I make a lot of music and work fast, don’t want to throw everything away and to be able to choose. I can work better at night, between 2 and 7 in the morning, especially when I am tired. I don’t have any inhibitions then.

How is it going with the piano skills?

salute: Enough for me to be able to sketch ideas or write pieces during sessions. The piano is my favourite instrument, I can process a lot of influences from gospel with it. But it is hard to play, because my fine motor skills aren’t the greatest. I spent hours working on the song with D.R.A.M. in MIDI because I couldn’t play it fast enough. I’m no Mozart (laughs). I teach myself some things with YouTube tutorials. But I have the best ideas when I have no idea what I am doing.

Did it help to do an official remix of a number one track in the UK?

salute: The Sam-Smith-Remix got me a lot of bookings and contacts at the beginning, but everyone has forgotten it now. I think it’s pretty shit and have sworn never to do anything like that again. And today I would still be where I am without it.

How does one get connected with Abra or D.R.A.M.?

salute: Just write them (laughs). You shouldn’t be to proud or to apprehensive though. It doesn’t matter how famous they are. In the end they are just people that want to make good music with interesting people. Luck played a role and in both situations the timing was perfect, right before they got big.

Do you still have contact to Mura Masa? And there were some jam-sessions with Sam Gellaitry on Instagram…

salute: I met Mura Masa on campus. We have been friends for three years and I am in contact with his manager about other things. I have also known Sam for years, he is a really nice guy. Once I was near him in Scotland, my location was visible on Twitter and he invited me over. He still lives with his parents and makes music all day in his room.

The attitude in the north is different, we don’t expect anything from each other.

salute: I played with them years ago in the Pratersauna and we started talking. Then again in Paris. They live around the corner here in Manchester. When I’m not at home I’m at their place. We hang out and listen to jazz (laughs). Or we spend hours recording music, help each other when we can’t move forward with an idea. Karma Kid does too. The attitude in the north is different, we don’t expect anything from each other. I was just in London for a meeting with Sony, they wanted me to do sessions with some really good people, probably had the best intentions, but it felt like I was expected to sell them my soul.

An album isn’t really that important anymore, is it?

salute: It is for me. I already started on one, it’s planned for next year. I know it sounds like a total cliche, but it should tell a story. I’m also going to sing on it, with autotune. I haven’t trusted myself with that so far. I want to write songs, and clubby stuff as well. I want to bring these two worlds together. I’m building up momentum for that right now. “Light Up” wouldn’t have worked so well without the earlier material. I have to follow up on that, otherwise I will waste it.

Who are you actually, “17 years old, with afro, from Vienna”?

salute(laughs): I remember that sentence from my first interview with you. Today, 21, high top, still from Vienna. I have changed a lot in the meantime, both as a musician and as a person.

In the Radio FM4 Soundpark it says that salute “[…] grew up with UK Bass and US Dance.”

salute: My big brother introduced me to hip hop at an early age. I grew up withTupac, Nelly, Ginuwine, R Kelly, Aaliyah, later I found James Blake, Mount Kimbie and post-dubstep on the net. I still listen to both of these influences today.

Back then I was really angry. For a year I was in a really bad place.

When you were 14 you were attacked with a knife. How did that go down?

salute: That was in the 22nd district, in Aspern, near my parents house. I have had to deal with racism as long as I can remember, in school as well, but something like that had never happened to me before. I didn’t know either of the two guys, they wanted to scare me, attacked me with a knife, called me this and that, and said I don’t belong in this country. My Viennese accent didn’t matter to them, it was just about the color of my skin. A couple of other people came around the corner, then they were gone and I ran home.

Back then I was really angry. For a year I was in a really bad place. But I don’t feel any hate anymore today. I also don’t worry about trying to explain to people that this happens in Vienna every day. I had some really long discussions with friends. A lot of them felt personally attacked when they were told they were privileged. They didn’t want to be complicit with the situation. But just understanding is really important.

Did you finish your studies?

salute: I quit studying in 2015, I had too much to do. Since then I have been able to make a living from music, that is really a blessing. You can live off of royalties in England if your song is played often enough in radio, I found that surprising. Spotify isn’t as good, most of that goes to the label.

Where is it easiest to stay in contact with your fans?

salute: I can’t stand Facebook at all anymore, everything is capped. I have to spend 30£ if I want to reach my people. Instagram works. I like to use Twitter the most. I get involved in discussions there. With my verified profile my answers are pretty visible. It can be exhausting, but if I can get people to think it was worth it.

Almost all of the new tracks are on Spotify. How is it going with Soundcloud?

salute: Shit. Almost everyone will give you the same answer. There are too many people making the same sound. It used to be different. I still put my songs up for my followers, but the plays have gone down.

And the Spotify numbers?

salute: I look at Spotify Insights pretty closely. You can see where the most plays are coming from, which tracks in the last 28 days or last minute were played simultaneously. It’s extreme. Lauren from Fifth Harmony twittered about one of my songs – she has loads of fans on Twitter, and afterwards an incredible amount of people listened to “Colourblind”. You get access to the numbers from Spotify. I was at the office in London, had a pretty nice conversation with their artist ambassador. They are working on tools for artists that will let you have personal contact with fans or get them tickets for shows.

How do you get on the big playlists? Is it hard?

salute: People from Spotify saw me at an industry show and approached me. We played a demo of “Light Up” for them in the office and they said they would like to promote the song. It can be that easy. The song ended up on 11 New Music Friday playlists, including the ones in the UK, Australia, The Netherlands and Germany.

Was it helpful that the labels 37 Adventures and [PIAS] were connected to Spotify through “Merlin”?

Why did you move from Brighton to Manchester?

salute: It was too small. Things are cheaper in the north and I can live better.

I’ve never felt an energy like I did when some people started to sing “Don’t Look Back in Anger”.

Did the mood change there after the attack on the Ariana Grande concert?

salute: I live right next to the Manchester Arena, was on my way to a store when it happened. Now everything has recovered, but on the day after the mood in the center was really tense. Every sound made people stop and look. That evening 70 or 80 thousand people were in front of the town hall. Poor, rich, Muslim, Christian, Hindu… The mood was very peaceful and sad, many cried. I’ve never felt an energy like I did when some people started to sing “Don’t Look Back in Anger”. It carried me away and it was helpful that so many people showed solidarity.

Has your view from abroad changed the way you see Vienna?

salute: Massively. I realised how beautiful Vienna is, what a high quality of life it offers, how clean the city is, how cheap it is to live there. On the other hand how angry the people are, how tense and unfriendly. And the discreet racism, when people don’t say anything but act strange. Like when no one will sit next to you on the subway, no matter how full it is, or when you get served later than the others. It’s not terrible, but it’s annoying. Doesn’t have to be like that.

How is it to headline Popfest Wien on the opening day with Liv Dawson?

salute: I don’t know. I can’t really tell how relevant I still am for Vienna. In Vienna you can often see how many artists are hyped for a few months and then disappear. I’m happy about it, I find it a huge compliment, but I have no idea what I should think about it.

In September you will play your first headliner show in London.

salute: Exactly. That’s an important step in the UK. You have to publish a few big songs, make sure that the show is sold out. The industry will be watching. It’s not a huge location, but they should just get bigger afterwards. London headliner shows are mega-important.