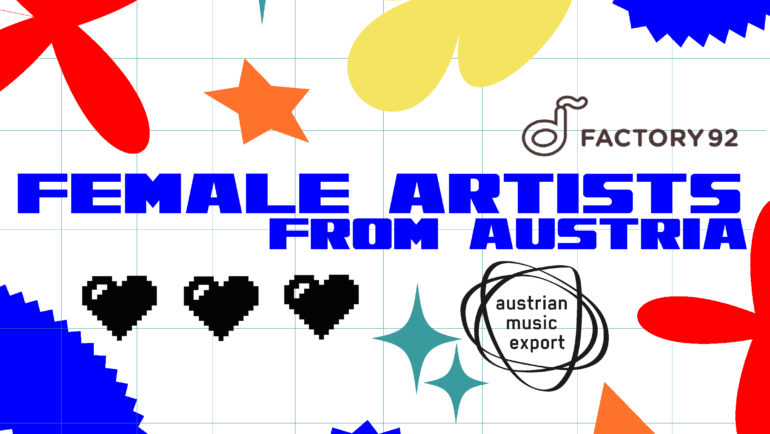 You don’t have to be controversial to see: The really exciting waves in pop, indie and even rap have mostly come from female artists in recent years – a statement that applies to the international music world, as well as to our Austrian scene. These exciting momentums are thereby produced and performed from a position that still cannot happen on par with the male competition in many respects – because our industry still has a long way to go, despite all the recognizable efforts towards equality and diversity.

Reason enough, therefore, to celebrate – with this playlist and together with our partners at Factory 92 – all those female artists who have inspired us in recent months and who still have a lot to do in a just world, should one exist.

For example: Ezgi Atas and Beyza Demirkalp aka AZE, two Austrian musicians with Kurdish and Turkish roots, who make music with their Hip-Hop-meets-Pop-meets-R’n’B sound design on such a level that one would like to see them as the opening act of, say, Jorja Smith. Big words, sure – but just play “We Move” and the point becomes clear.

OSKA and her band have been reliably delivering the classic female singer-songwriter sound with their own twist for several years now. These days her debut album, “My Love, My World, Paris” is released with no less than 12 fantastic songs, which sound sweet, playful and beautiful at first listen, but, lyrically, open up a variety of deep undercurrents. She is represented in this list with her current single “Mona Lisa, A Girl’s Best Friend”.

A kind of German-language, ultra-poetic shoegaze dreampop tune with a droney twist is what Sophia Blenda from Vienna brings to the table, with songs like “Wo bleib ich”. The singer, multi-instrumentalist and lyricist, who is otherwise on the road with her band Culk, is releasing her solo debut on PIAS in late summer.

Florence Arman, who proves with “Fever” that she has the stuff with her unmatchable voice and charisma, is currently positioned as the new pop star to bet your cards on.

“My body is blowing up your system!” and “I’m fat! And I like it!” shouts Leni Ulrich into the world, with her terrific band Bipolar Feminin. It’s in-your-face, intelligent post-punk that sucks you in at the very latest when Leni Ulrich sings, “Take a bow, I’m your queen!”

And these are just a few first teasers for the 11 songs in this playlist. For the rest, feel free to discover for yourself, first, and follow up with us for more info on them later.

If you want to dig even deeper, check out our Spotify longlist celebrating women with more than 50 tracks by female artists from Austria.