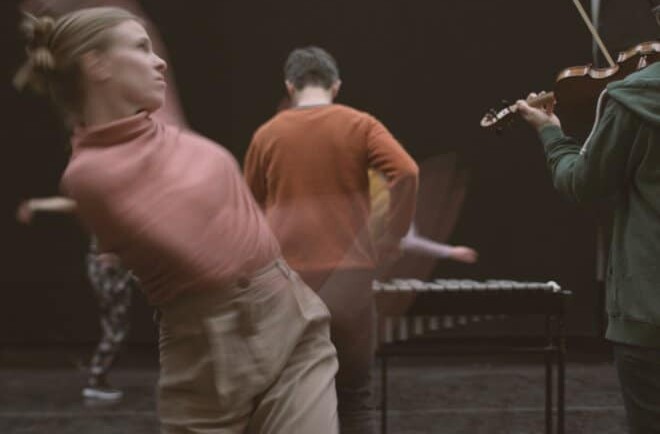 FEMENINE is a joint musical-choreographic project by Vienna’s new music collective, STUDIO DAN, with a group of dancers, which sees its world premiere at Impulstanz this year. Moreover, it’s another performance highlight in our Crossways in Contemporary Music series, in which we put the spotlight on contemporary music crossover initiatives from Austria and abroad.

The work and biography of the composer Julius Eastman has been rediscovered for several years, Studio Dan added his pieces Gay Guerilla and Femenine to their repertoire in 2016. His idea of ​​“organic music” is the starting point for the choreographic examination of the piece Femenine.

Referring to Eastman’s views and experiments with new and unconventional performance formats for his music, the inclusion of space as a performative material is just as central to the project as the interplay of sound and movement.

Eastman’s political agenda – the resistance to all conventions – is already very clearly outlined in his titles (Evil Nigger, Gay Guerrilla, etc.). In the music itself it is more than clear due to the anarchist form of organization, the highly individual sound language, politically charged quotations and the performative performance practice.

The starting point of the choreography is the musical score and its parameters, which are translated into choreographic scores and tasks. Building on the formal clarity of the motif and the freedom it contains for improvisation, the dancers develop modules that can be implemented in different locations.

The project is to be implemented in public space and in qualitatively different locations in the city; in central, representative, historically connoted places and in peripheral places.

As part of our CROSSWAYS IN CONTEMPORARY MUSIC series, we feature projects, initiatives, performances and movements which cross contemporary music with other fields of art and interest.