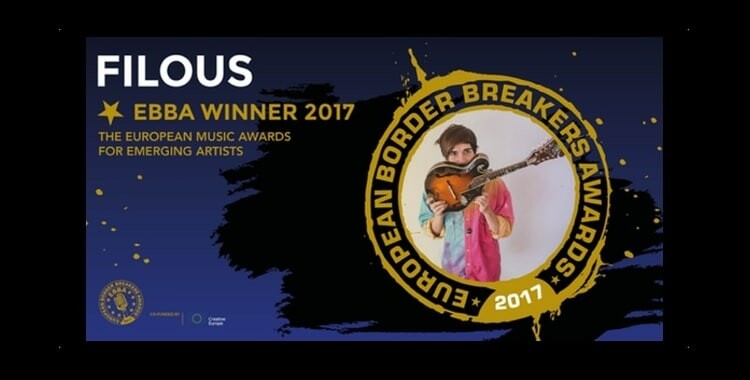 Today in Vienna/Austria, Filous was announced as the sixth winner of the 2017 European Border Breakers Awards (EBBA), the European music awards for emerging artists. Filous was surprised at Ö3 Hitradio by Benny Hörtnagl.

A self-taught multi-instrumentalist – counting mandolin, guitar, piano, accordion, flute, bass, and drums among a few of his many skills – Austrian producer Filous began remixing tracks in 2014, with notable remixes for artists such as José González and Kodaline. The following year he released his first original tune ‘How Hard I Try’ featuring James Hersey on vocals.

Just as Filous graduated from high school, that track went on to notch over ten million streams and was included on his debut EP, Dawn. The EP harvested positive reviews, often focusing on the use of acoustic instruments imbuing the EP with a ‘richness and warmth usually absent from electronica’.

Earlier, Alan Walker (no), Jaakko Eino Kalevi (fi), Namika (de), Walking On Cars (ie) and Hinds (es) were also announced as winners of an EBBA. A total of ten EBBA winners will be announced in the upcoming weeks. The EBBA ceremony will take place on 11 January 2017 in Groningen, as part of the Eurosonic Noorderslag festival. At the ESNS festival 2017, Austria will be represented by a total of six acts: Filous, Salute, Inner Tongue, Wandl, Farewell Dear Ghost and Mother´s Cake.

From the group of enthusiastic gig-goers out on the weekend to the industry dedicated to making the music you love, Music Moves Europe. The EBBA are one of the EU’s ways of celebrating European popular and contemporary music, by bringing the artists, the industry and the fans together to celebrate European music.

Every year, 10 European artists receive an EBBA to recognise their success in countries other than their own. This success is measured by:
* airplay
* sales
* live performances in Europe
* position in the European Border Breakers Charts (The European Border Breakers Charts, launched earlier this year and compiled by Radiomonitor, rank tracks from around Europe based on airplay abroad.)

To be eligible for the 2017 awards, the artists must have achieved border-breaking success with their first international release in Europe between 1 August 2015 and 31 July 2016 and come from a country participating in the EU’s Creative Europe programme.
Public Choice Award: Cast your vote for your favourite act among the 10 EBBA winners selected for 2017. The winner of the popular vote will be awarded the prestigious public choice award on the night of the show. By voting, European music fans have the chance to win a trip with a friend to the EBBA show.