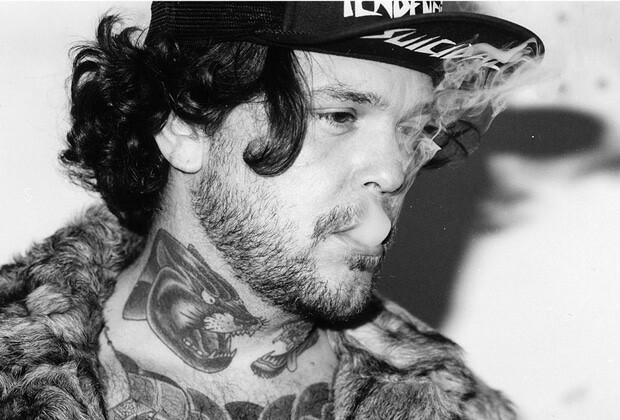 One can certainly describe BUM BUM KUNST as a “One Man Show”. The Linzer local has been producing his own beats for many years, which serve as the musical basis for his rap lyrics. Now he has released a new solo album “November Reign”.

Inspired by the lyrical early works of Linzer rappers like Oh Vo (Brotlose Kunst) or Markee (former member of the band “Rückgrat”, nowadays active solo known as Kroko Jack and Wossamau), BUM BUM KUNST took the microphone into his own hands about 15 years ago. The well made beats of producers like Flip or Megga were often already reserved for other rappers, so instead he just sat down on an old PC and started to make his own instrumentals using an old audio program.

Ahead of his time

Whats remarkable about BUM BUM KUNST ´s career is that he got to work with his mentors and inspirations at such an early point in his career. Together with Oh Vo he had a band called “Engelstaub”, and a little later the slang rap duo “Sodom & Gomorrah” with him and Markee. He was also part of “Tonträger Allstars” and the Linz based supergroup “Die Unsichtbaren”. It was a quite demanding Hip Hop school he had to go through and it influenced him artistically. BUM BUM KUNST was also co-founder of the so-called “Slangsta” Movement, a term for harder and more explicit dialect rap from Austria.

As a producer, BUM BUM KUNST already showed early on that he has an uncanny feeling for music and often swims against the stream. While most Austrian instrumentals in the early 2000s were classically based on samples of old records, he was already playing around with omnipresent 808 drum sounds and synthesizers, programmed triplet hi-hats and created playful hymns such as “Hupf in d’heh”. He was already enhancing his vocals with autotune effects years before it was acceptable in rap.

He was inspired by the records of American Southern rappers, West Coast-Gangsta Rap and Jamaican Reggae-Dancehall acts. In an interview he admitted he has always had a soft spot for harder guitar music. All these influences have shaped his own sound. In recent years, for example, he has been active as vocalist in the crossover band “Kaligula”.

Collaborated with Trettman 10 years ago

BUM BUM KUNST raps in Upper Austrian dialect. This connected him with the German artist Trettmann (then Ronny Trettmann) more than 10 years ago. Before his career as a rapper, he was primarily known for German-language dancehall music in Saxon dialect and was a pioneer in this respect. A brother in spirit. They also collaborated on a recording for “Sodom & Gomorrah”. And when Trettmann needed someone experienced in the field of autotune for his Snoop Dogg cover version of “Sensual Seduction”, he asked BUM BUM KUNST to do it for him. A small anecdote which is good for a smile today.

The title of his new album is based on a personal pattern he randomly noticed. Whenever the summer is over, the days get shorter and winter depression is just around the corner, he is overcome by a creative energy with which he saves himself and in which many of his songs are created.

With “November Reign”  – German for “round dance”-  BUM BUM KUNST now presents a wide range of rap music. Vocally he has found his way to himself over the few last years. It contains a bit of everything: funny punchlines, storytelling, rough punchlines, political statements (“greetings from Antifa”), as well as interesting features from long-time companions like “Brotlose Kunst”, DJ Buk, Skero, Deo, MOZ, GC and some others.

A few days ago an amusing music video for the older Skero & Bum Bum art collabo “L Funk” was released. A Linz gangsta rap parody, including all the clichés you’d expect.

And while we are consuming BUM BUM KUNST ‘s newly released album, he is doing what he deserves right on time for the release day: a several week long vacation in Portugal.