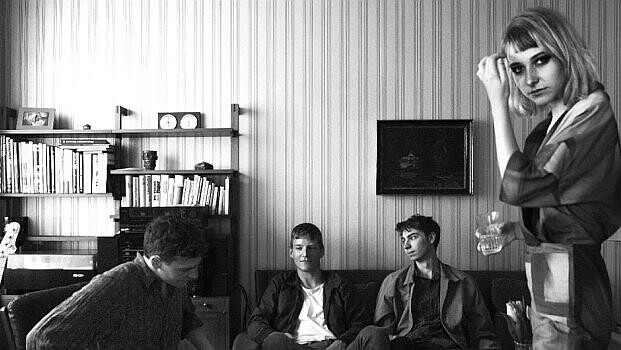 Culk from Vienna tell meaningful stories about self-discovery, dystopia, and melancholy. The uniquely dark guitar in the Austrian pop circus: Culk are the FM4 Soundpark Act in December.

“Off To The Race” is a song from Lana Del Ray that was influenced by Vladimir Nabokov’s novel “Lolita”. With “Wuthering Heights” Kate Bush refers to the novel of the same name by Emily Brontë. “Red Right Hand” by Nick Cave and the Bad Seeds refers to the epic poem “Paradise Lost” by John Milton. The list of songs inspired by classics of world literature is long. Culk from Vienna are no exception.

Their first single, released a few months ago, is called “Begierde/Scham”. Already a bit late to the rehearsal, Sophie Löw, lyricist, singer, guitarist and synthesizer player of the band, had been reading Simone de Beauvoir’s novel “The Mandarins of Paris”. There is a passage in the book that makes her stop. Lost in thought, she stumbles into the room where the others have already begun to work on a new song without her. Without any “hello, how are you” she goes to the microphone and starts singing. The best way for a song to be created.

“Begierde/Scham” is inspired by a scene from Beauvoir’s key novel published in 1954, in which a woman who’s is being cheated on by her husband, cheats herself. However, the affair she has does not give her any relief. On the contrary, it raises even more questions: Do I want this? What do I want? Who am I giving myself up for? For me? For him? For love, for revenge?

“The non-words bind her. She is so beautifully silent. He only knows himself,” sings Sophie Löw. The guitar scratches as the voice bends. Words, sung in German, are not always emphasized according to the most beautiful standards of high-German. Instead, language is given a whole new place between the roughly brute instrumental setting. You can´t make out every word while listening. But the feeling of distress, insecurity and shame is even stronger than the content of the song. This is not feel-good music.

Culk are from Vienna, the members beside Sophie Löw are Johannes Blindhofer (guitar), Benjamin Steiger (bass, guitar) and Christoph Kuhn (drums). Before the release of their first single “Culk” uploaded some promising material to Youtube and had played the Wiener Gürtelbahnbögen over and over again. When it turned out that Jakob Herber (Flut) was producing their almost finished album the Viennese label Siluh also became aware of them. Since then Culk have been under contract there, have appeared at the Waves Vienna Festival and have already played their first small tour of Germany. With professionalization comes expectation, but for Culk even more ambition: the self-titled debut album will be released in February 2019.

“Faust” the second single has just been released. Of course they´re not simply quoting Goethe right here. This song, too, is based on a gloomy winter mood. It’s all heavy, dark grey, somehow hopeless. There is an unnamed person, attracted by a strangely authoritarian power. She doesn’t know anything, only that she has to follow the call, headlong into the questionable. “Hold me tight until I don’t know anymore / whether she catches me or tears me apart.

A protagonist who seeks the truth outside his knowledge; this is where the literary parallel imposes itself. A doubter, like Goethe’s Faust. How he sits there, at his desk, and Gretchen asks him the impossible question: “Now say, what’s your deal with religion? Who does one believe in when the inner struggle is the worst? Who to follow? In “Faust” by Culk there is only one way, and it leads down. The mantra: “Paralysis begins“.

Musically it is also a journey into darkness, beginning with a driving groove, poking at everything, stumbling into an uncertain back and forth of jangling guitars, and at the end it flickers and flashes. Everything blurs. Dissolution.

It’s going to be very exciting

The first two singles of Culk are both in German. However, the album will also feature English songs. The language needed to express a text depends on the mood: hard, direct, grammatically correct German or the softer, descriptive, symbolic English.

After their first single release Culk were described as a mixture of The Cure and Marlene Dietrich. Yet everything about this band is young. The members. Their refusal to use anything that could have come out of the box, both live and in the studio. Idealistic, unabashed, and unwilling to bend to the trends and structures of the music business. One has to think of bands like Die Nerven or International Music. Guitar music that references its idols in a contemporary way, but draws the most important from itself. Not a simple trick.

By Lisa Schneider – translated from the German article (FM4) by David Dempsey.