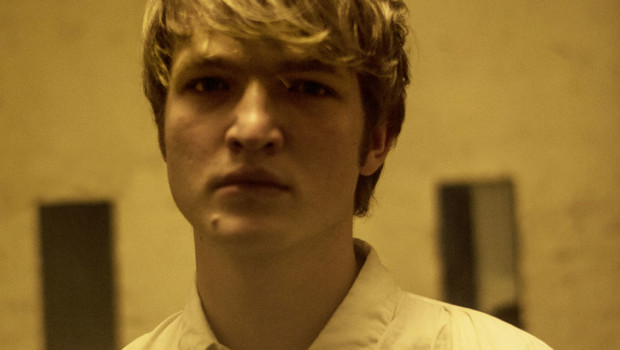 Felix Kramer collects songs about almost-perfect love on his debut album “Wahrnehmungssache”. He is the FM4 Soundpark Act of the month October.

Felix Kramer’s debut album “Wahrnehmungssache” (German for “matter of perception”) is heavy despite its sparse instrumentation. The 23-year-old songwriter from Ottakring, Vienna, gets a few things off his chest through his songs. He plays on the dark strings of life and sings heart-wrenching songs of heartbreak, abandonment, relationships or, as in the title track, of the callousness and brutalization of society and the current government: “For me it’s really all about discussing unpleasant things and feelings and events and simply shining the light on them and looking at them and then still coming to terms with them and to figure out what they are. And that really runs through the whole album.”

The Viennese dialect singer has collected eleven songs on his debut album, and they convey an unusual amount of maturity and seriousness for a 23-year-old. No more illusions for Felix Kramer. Thoughtful and sober, he plucks his guitar and shares his view on things.

Instead of throwing himself headfirst into the action, he prefers to stay away and watch from a distance. Felix Kramer describes the interpersonal relationships with many nuances, empathy and calmness, without kitsch and rose-coloured glasses. This great tranquility and reflection seems almost anachronistic in this fast-moving time of casual internet dating and pimped-up music productions: “Maybe I unconsciously want to set a clear counter-programme“, Felix Kramer says in the interview, “a contrast to this over-excited, over-produced action culture.”

Neither fish nor fowl

Felix Kramer especially likes to devote himself to the semi-perfect relationships, the dark grey nebulousness, in which you don’t exactly know where you stand – in which you’re neither particularly happy nor very unhappy: “For one thing, I’m interested because you’ve already heard so many songs about this perfect and amazing love, or the totally dramatic one. And I think it’s much more realistic that it’s kind of half perfect. Maybe it’s just my experience, but it’s not always terrible and it’s not always great. That’s the way I see it.”

Although he pursues the half-perfect relationships in his songs, he has already perfected the relationship between him and his guitar to a large extent. Back in kindergarten he already knew that he wanted to sing and play guitar. This was followed by studies of Classical Guitar at the MUK, the Music and Arts University of the City of Vienna and numerous prizes at international competitions. But not only has Kramer, whose real name is Felix Pöchhacker, tried his hand on classical concert stages, but also in ska, rock and reggae bands. This flexibility and versatility has remained with him. Instead of playing it safe and pursuing a career as an electronic musician, Felix Kramer takes a chance and presents his own compositions to the audience with increasing success and an expanding line-up.

On his debut album “Wahrnehmungssache” Felix Kramer is mostly heard solo on the guitar. For drums, violin, bass, piano and production he has gathered a group of established musicians around him, who occasionally accompany him at his concerts: Christian Grobauer from Schmieds Puls, Martin Eberle from 5K HD, Martin Siewert from Radian as well as Clemens Wenger and Hanibal Scheutz from 5/8erl in Ehr´n.

“At some point I was looking for a producer, and then listened to Wilfried’s CD “Gut Lack”, which Hanibal Scheutz produced for his father Wilfried Scheutz. That´s when I knew I really wanted to work with Hanibal, because this album sounds so incredibly great. This was also the direction I wanted to go, and the work with Hanibal was beautiful, long and detailed. We gave ourselves a lot of freedom, had a lot of ideas going back and forth and now we´re quite good friends, I would say”.

Felix Kramer’s “Wahrnehmungssache” is emotional music with a lot of tenderness, not music you can just listen to on the side. It requires attentive ears to make sense, to perceive the fragile poetry of the lyrics and the occasional wit behind it. As models for his art, Felix Kramer used French chansonsieres such as Yves Montand, Serge Gainsbourg, American singer-songwriters such as Bob Dylan and Leonard Cohen, and, from Austria, the man with the finest of blades of all, Ludwig Hirsch.

By Daniela Derntl – translated from the German article (FM4) by David Dempsey.