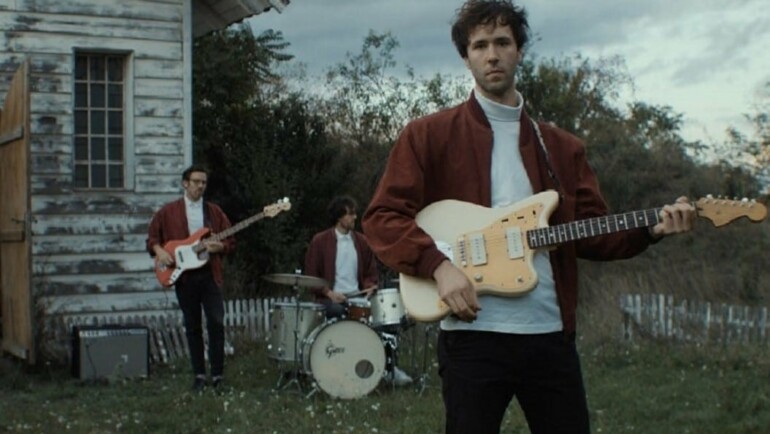 A good soundtrack iN autumn

Good Wilson write songs for lonely people. Maybe that’s why their guitar-driven pop is so beautiful. Good Wilson are the FM4 Soundpark Act of the month in October.

Once upon a time there was a movie called “Cast Away” and as the title reveals, it is about a man lost on the high seas. A Robinson Crusoe tale. Tom Hanks is the shipwrecked protagonist. He has only one friend to talk to. His name is Wilson. Wilson is a volleyball.

“Cast Away” might be the secret favourite movie of the band Good Wilson from Vienna and Graz. Anyway, Good Wilson write music for everyone who is alone – or who feels lonely. A good old song is always the best companion.

“Loneliness” is a big word, but it fits so well into autumn, when nature cools down and you wonder who you want to spend the winter with. These thoughts emerge at Good Wilson’s gig at the Waves Vienna Festival in the beautiful inner courtyard full of red autumn leaves. These are songs that get along without fuss, that are strung together as if they had never been written separately. A live set of Good Wilson is laid-back and intimate, as you can empathize with the music and the environment. And it is satisfying too, as you will leave knowing you have just heard a small band that’s going to be a new favourite!

About the band’s history

Good Wilson consists of Günther Paulitsch, Julian Pieber, Alex Cannaughton and Mario Fartacek – musicians from Vienna, from Graz and from Salzburg, who have known each other for a long time. Previous and partly still active bands of the Good Wilson members are Polkov, Mynth or Shaun Berkovits. Good Wilson borrow the musically meandering “slacker” habits of Polkov in particular, which are usually known from American acts, especially from cities like Chicago or Philadelphia.

Before summer, Good Wilson released their first single “Walk The Talk”. The story is quickly told: It’s about getting up and going to bed later. And it’s about everything that happens in between.

Sounds banal, but maybe it’s just reflected enough to see the big in the small picture. The bland, the beautiful everyday life, which may also take place “offline”. In the vast field of unprecedented and overacted stylisation and self-production of  private people, but of course also of many bands, Good Wilson being an exception. Understatement is a good thing.

When it comes to social media: Good Wilson‘s Facebook page is fantastically designed. In the info section under “Interests” you can find “Sim City 2000” and also “Wi-Fi”. And, especially nice is the self-chosen genre: “Skygazing”. Like “Shoegaze”, but not so sad.

It’s also exactly this excellent, smug sarcasm that accompanies the band´s videos. Nobody has been hit on the head by a volleyball as well as Günther Paulitsch was in the single “Walk The Talk”, nobody nibbles more casually than Julian Pieber does on his corn stalk for the song “Divine”. Cowboys, that’s Good Wilson now. Of course not really.

Good Wilson write music that might please fans of bands like (Sandy) Alex G, Mikal Cronin, Palace Winter or Skinshape. This all comes from a similar place, where highly talented artists have decided to take a straight forward and easy way. Celebrating the strings, soothing after-work music, full-bodied, warm, and for weeping. And analog again. This light pop style ripples nicely. A laid back affair in the best sense of the word, yes, really slowly, one could say. But good things often unfold at a slow pace.

Good Wilson (facebook)
FM4 Soundpark Acts of the Month (all)