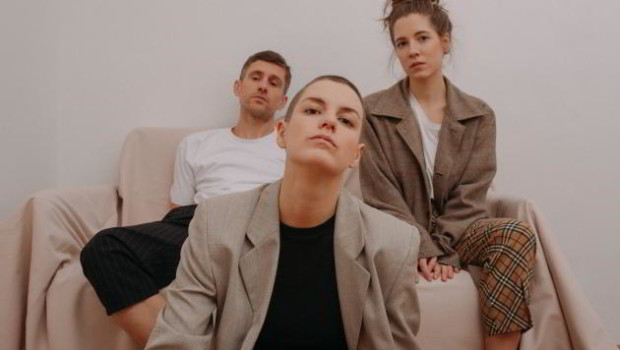 In search of beauty and ideals

Extremely delicate electropop on the way in to summer: Love Good Fail released their debut album “We Met At Night”. They are the FM4 Soundpark act in June.

“You don’t love someone for their looks, or their clothes, or for their fancy car, but because they sing a song only you can hear”, Irish writer Oscar Wilde once said. It was his eternal search for the beautiful and yet unfinished which he highlighted in his plays that still draw the audience into his performances today.

Meeting in front of the stage

That is where Maria Tunner, Johannes Pobitzer and Johanna Prechtl met two years ago, by chance, after a theatre performance by Oscar Wilde. Maria and Johannes had known each other for a little while, neither were involved in a band project at that time; the bell rang, and Johanna was standing at the bar. Johanna’s relationship to the theatre is even closer than that of the other two; she had already worked in dramaturgy in various theatres in Vienna and Lower Austria. That this evening will be the beginning of something new wasn’t clear until the moment they met: “After just a few words, we knew that we wanted to do something together. It just wasn’t clear yet that it would be a band that would be formed here, namely “Love Good Fail”.

They call themselves a love triangle, and that has nothing to do with some cheap double entendre. It describes how the three of them felt for the first time they could express themselves the way it comes from within.

A roundabout way to a band

Johanna plays drums but never really dared to play in a band. Maria studied musicology, music education and music pedagogy. She plays the piano and has worked a lot with contemporary music. But then, it must have been about the time of that theatre performance, she realized that she had to go in a different direction. “And the direction was pop.”
Johannes, who actually studied philosophy and musicology, has been shaping and creating his songs for a long time without instruments. Just a laptop; loops, beats, basic frameworks, which just needed that little extra something . “We are children of our time, in a postmodern age in which the computer has long since reached the status of a classically developed instrument”; every musician will confirm this, and Love Good Fail electronic equipment to bring their songs into their final form.

The theatre not only played a major role in their first encounter, but continues to do so. The lyrics of the debut album “We Met At Night” were written by Johanna, which she originally wrote in German prose form. “I wrote these texts during my work at the theatre, actually without the thought that anyone but me would ever read them,” she says, “and then suddenly there was the band”.
The originally German stories were remodelled into an English, lyrical version. What remains is the essence of 13 stories, which you may not recognize 1:1 anymore, but for the band the album holds together in one piece. “Even though our songs have grown out of stories, the finished song focuses on the feeling, a certain mood, not the direct narration. The three of them discuss certain emotions that Johanna recorded at that time from all possible sides, they reinterpret Johana’s approaches so that they no longer only come out of her, but out of the entire band.
Johanna doesn’t play drums in Love Good Fail, she sings. Maria plays piano – it is one of the few analog instruments recorded for the album along with percussions – and Johannes, he builds the beat framework.

“Poolboy” was the single, released a few months ago, with which Love Good Fail presented themselves to the public for the first time. An ode, an homage to the untouchable, which can also be seen in the video. It’s a song of longing for a character who could have sprung from an Oscar Wild piece; smile once, so that I know that you are a human being too.

The voice meanders, sleepily balancing between Soko and Robyn through the lines, the beats in the background sound as if they had once been faster and adapted to the lyrics later, shifted down a gear. Drifting, searching, and dreaming, by the pool or everywhere.

The current single is called “Nice To Meet You”, and, like the album title, sums it up: “All our songs are about encounters, between each other, with others, and also about encounters with the audience”. “Nice To Meet You” is a discreet, but still strikingly intoned pop song, it’s almost hard to process so much honestly meant positivity, it comes from the heart, warm, sugary, almost syrupy.

Love Good Fail write songs about short precarious situations, the hustle and bustle in the crowd and often missed connections, which they want to challenge. And towards the end, even the stoney pool boy smiles. There is a party, you are together. The best of all is that you are together.

At the end of each song, each rewritten story, at the end of the album “We Met At Night” stands a conciliatory element, which is perfectly appropriate for a hot summer: musically almost as light as a feather, not too thoughtful in content, but therefore never too long without content. It sounds like a loving invitation to blink into the sun when it gets too bright for a moment and reality becomes blurred. It is also an invitation to move closer together; and, through art created or at least enjoyed together, perhaps to catch the glimpse of the beautiful and ideal.

by Lisa Schneider (translated from the German article by David Dempsey