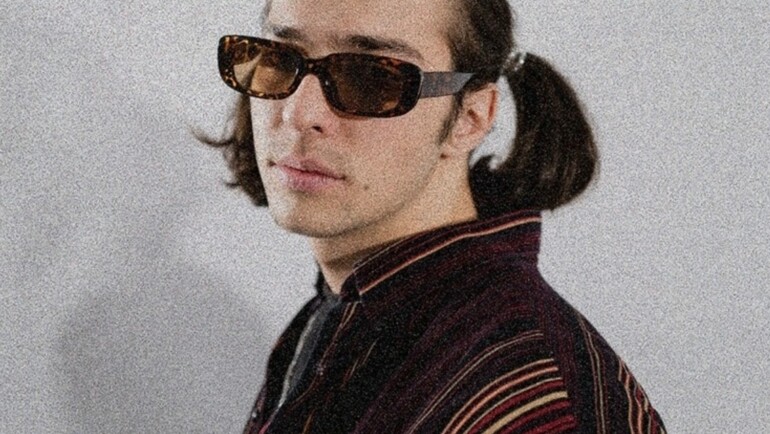 The Viennese rapper from Mariahilf (7th district) is currently probably one of the most ambitious rappers in the Austrian scene. Recently he has been approaching – slowly and cautiously – the indie path as well. Bibiza is the Soundpark act of the month.

Nobody is shaping the Viennese rap scene as uniquely as Bibiza and his self-chosen family with prodbypeng, liebcozy, Eli Preiss & co. There is no street fuss, no Glocks, but rather, rented Teslas, Vodka Makava and real stories from the bougy Mariahilf or, as it is called on the track “Delle”:

“A lot of rappers say things, but a lot of it ain’t real / We ain’t gangsters, just wise guys on the map”

But that’s just one ingredient in the recipe for success of Bibiza, the Soundpark Act of the Month. Since 2018, the rapper has been delivering singles and tapes like hot cakes, always trying things out – sometimes drier, sometimes trappier, sometimes calmer and more melodic. His lines flow effortlessly over the beats, which sometimes come from him, but mostly from producer Demian (aka prodbypengg).

The two met about three years ago at dasBACH, where Bibiza was opening for BHZ, and immediately bonded. Demian now produces for Eli Preiss, among others, and has already been behind the decks at the FM4 block party. In any case, it’s rarely boring with Bibiza – although rap was never really what drew him to making music.

At the age of 12, Bibiza started making music. At the time, rap still seemed a long way off. He played guitar and covered songs by the Red Hot Chili Peppers, The Cure and the Smashing Pumpkins. The covers are available on YouTube, “but they’re all private,” as he reveals with a smile in the interview. It wasn’t until 2012, when he was just 13 years old, and a previously unprecedented pop-rap wave swept over the German-speaking world with tracks like “Sunny” by Cro, that he decided to start rapping.

In 2018 he released the first singles, in 2019 the first album – Copypaste, in 2020 finally the successor arrived – Bis Dato. His lyrics revolve around the daily lifestyle on Wienzeile (in Vienna), loitering with the gang and getting excited about the monotonous trends of the German rap scene. His music is “partly reflective, partly deliberately unreflective”, but always with a certain ambition: “It’s indeed important to me to keep the ambition high. It’s so easy to make music at the moment. You can just go to YouTube and pick beats – they’re perfectly produced, but they don’t stand out. It just doesn’t have any value. It’s like painting something on an iPad instead of on a real canvas.”

Today, the early musical role models are slowly flowing back into his own work and mixing with trappy sounds. What comes out of it, was for example already on the feature “?! (get hyped)” with Mavi Phoenix and now again with “So bei mir”, with which made it to number 1 in the FM4 charts: a simple, hi-hat-heavy, lo-fi track, with no unnecessary flourishes, just two guitar chords and lots of vibes:

We’ll get to hear more from “Indie-Bibi” at the end of the summer, when he releases his first indie tape: “It’s rap, too, of course, but more guitars and acoustic drums.” Asked why he’s doing this now, Bibiza replies, “We’re just very versatile musically, and when I’m over 30, I don’t think I want to do rap anymore.”

On the move in a Swift Circle

Until then, however, a lot will happen, and the foundations have already been laid. The circle around Bibiza is getting bigger and bigger – at the FM4 block party he was surrounded by the Viennese crew with people like liebcozy, prodbypeng, Eli Preiss & vo. who were there from the start, but step by step, it is becoming more and more a transnational rap connection, a kind of fusion of the German and Austrian underground rap scene that has hardly existed until now.

There are, for example, the German Boloboys with newcomers like Makko, Beslik Meister or Toobrokeforfiji at the start, the Salzburg rap talent browneyeswhiteboy or also the Viennese Pan Kee-Bois. Together, they sometimes hold German rap evenings at the Grellen Forelle or an improvized benefit concert on a car roof at Schillerplatz, which makes the Yung Hurn concert at Karlsplatz a few weeks later almost seem prudish.

These connections, which are opening up, bring new heat into the Viennese rap scene and are also reflected in Bibiza’s latest releases. Before we can finally look forward to Indie-Bibi in the fall, Bibiza will release a mixtape in August in his old style. He is indeed ambitious.

Translated by Arianna Fleur from the German original, published on August 1st, 2021