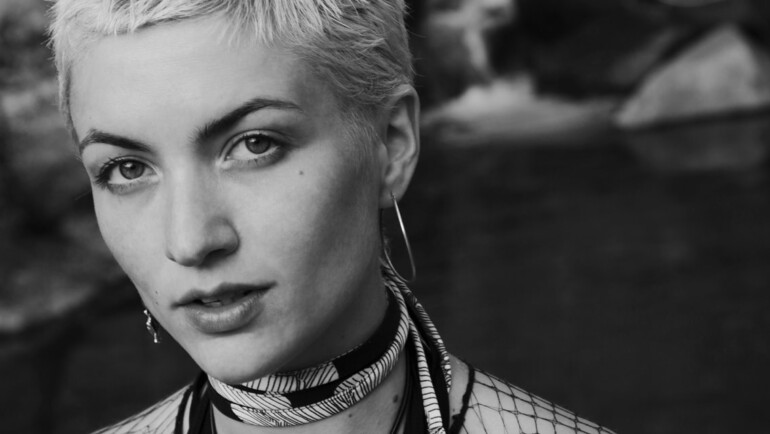 WITH A LOT OF SOUL

Elena Shirin’s songs are mantras between jazz, soul and electronics. Her debut album “From A to Be” will be released in mid-May. It is about traveling around the world and into oneself. B stands for “being”.

Elena Shirin prefers to write in coffee houses. With many espressos downed, 80 percent of her songs were written at the Kafka in Vienna. Production is then done on the train, on the go. Travel is the common denominator in music and life of the Viennese songwriter. Already as a child she was the “jukebox” when the radio in the car didn’t work while traveling through Romania.

Elena Shirin Zoe Handl is probably what you would call an exceptional talent if it weren’t so trite. For her sixth birthday she got a keyboard and started playing songs by ear. Even before she could read music, she developed her own notation. At the age of eight she took classical piano lessons, a bad experience. At 12 she started writing songs. At that time, they were mantras to remind herself of how she wanted to be in life and how not.

The lyrics are still pouring “right from the heart”, but they are never about the musician herself. There should be enough space for everyone to find themselves again in her songs. And indeed, you get stuck on phrases like “We need wonders” and “Do not implode, let it all out”. The latter a reminder to make room for your own needs. To let it all out and be kind to yourself.

FINALLY ON HER OWN

Speaking of personal needs. For her debut album “From A to Be” Elena Shirin first had to “free herself “. From other band projects like Aramboa and Oehl, but also from her studies in media composition and computer music at the Bruckneruniversität in Linz. “I’m already so highly pregnant with this stuff, I can’t keep sitting on these songs. Otherwise they’ll rot on my hard drive, I can’t stand it any longer,” she says, thus summing up the anticipation of the release on May 15. Patience, Geduld. A song on her debut recording into which she has packed all her emotional world. The beat pushes towards a jazz-heavy piano. You can feel it burning under the fingernails.

“I see the pit in cooperation / In love with exchange of them souls / But if I look at the origin / I see the color of solo”, it says in “All the Colors”. It’s the actual song of the album in which she sings about her way of becoming a solo artist. A process that has paid off. Elena Shirin is finally doing her own thing. It was simply a matter of doing it, putting it into practice and “kickin’ it out”.

FROM WALTZ TO HIP HOP

“Where are we gonna be in a week?” asks Elena Shirin in the title track and gives herself the answer “Impulsively traveling / From one end to the other / From A to Be.” It’s about traveling inside and outside. Those who travel begin to be and get to know themselves. It doesn’t have to be the journey from Timbuktu to Nebraska, but “the traveling inside the self, the traveling through life, year after year”.

Elena Shirin: “You become something when you travel from A to B. For me, travel is a process in which you see many facets that you may not have seen before. And you also let go of the thought that you’re aware of everything anyway and know everything anyway.”

“From A to Be” brings together songs that Elena Shirin has written between the age of 12 and 22, over the last ten years. Ten years that were also a journey, a musical one. From the beginnings with voice and piano, until now, to self-produced sound pictures. From waltz to hip hop. From classical elements to electronic tribal percussions reminiscent of Woodkid.

A collection of sounds, people and places, created between the USA and Europe, multi-dimensional and intercontinental. Kitsch-free strings appear that touch the listener, then a saxophone. Further down on the album the only German song – “Holometabol”. You have to listen carefully to recognize the language. Electronically and mystically dedicated to the moth.

“COLORFUL, SOULFUL AND FULL OF SPICES”

Ten years of music on one album. Things can fall apart pretty quickly. Not in this case. A soulful voice and a lot of feeling hold it all together, form the framework of the story like a sultry summer’s day. Heavy and warm.

FROM VIENNA TO THE CALIFORNIA WILDERNESS

Elena Shirin would love to release another, a new album already. Yet where she is now, there are no coffee houses at all. “Back then I often cut classes together with a good friend. Instead of going to school, we sat at the Café Europa, smoked one fag after another, cool as we were, and spent hours writing to-do lists for our future selves in our notebooks. What we need to do before we’re 30.” Now she’s 23 and has ticked off the point “living in a trailer in the wilderness”.

For the moment and probably for a long time to come, the musician has actually ended up in the Californian pampas. There she’s living with her husband, the saxophonist of the US band Moon Hooch, with which she also toured, in a trailer in the wilderness. And she loves the simple life between hammock and meditation hut. It is the utmost luxury to be in nature, she says during the telephone interview, it is 10 o’clock in the morning at her end of the line. Born in Scheibbs in Lower Austria, she has usually always lived in the city, “in 17 different apartments”.

Until they know where they want to settle down, they are staying where they are and are building a mobile photography and production studio into a truck trailer. It’s a life between two continents. Elena Shirin wants to be present and tour on both, that is the big goal. One thing are the roots, the other is a new era, “in which she’s trying to see what might work out”.