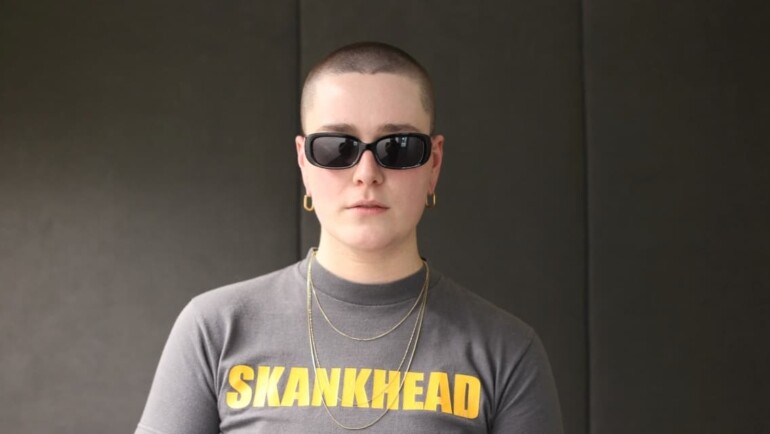 The FM4 Soundpark is a web-platform, community, and radio show for Austrian musicians. Every month, one act is selected to be highlighted both online and on air: The FM4 Soundpark Act of the Month. This month, the featured artist is FARCE. FM4 spoke to the musician about her emo youth, her open approach to mental health, and, of course, her upcoming album “Not To Regress.”

“I hope I can tease you all month long,” Farce gloats mischievously as we tell her the happy news that she’s our FM4 Soundpark Act of the Month. Some may be thinking: “Finally!” After all, Farce has been part of the music world for years, and certainly no stranger on FM4 either. At the latest, since her 2018 album “Heavy Listening”, she has been a constant in the domestic scene.

“For me, the Austrian music scene is: my friends and me. And the rest is just not that important.”

Farce is also constant in her always refined sound and very introspective lyrics, paired with often danceable, sometimes awkward beats. Many terms have already been used on these pages to put Farce’s music into words: Distortion, noise, wit, intimacy, grand gesture, autotune and many more. As I read her the long list, Farce nods in agreement and says, “I can’t and won’t argue with anything. It’s all still true.” For Farce herself, however, her music can be clearly described with one word: Pop.

As multi-layered and original as her approach to pop is, her lyrics are just as open and personal. They are about depression, fears, and compulsions. Opening up like this and making her own mental health the circumstance of the songs is a very natural process for Farce: “After all, I don’t do all the work for myself in order to then not experience an emotional release myself.”

For the musician, writing her lyrics and releasing her songs is a form of communication, not only to the outside world, but precisely with herself. Since going to therapy, Farce says, she’s been writing even more honest songs, but has also learned to deal with her mental health in a completely different way: “Work should never be the only outlet for mental health, that can only go wrong.”

Even her youth as an emo and connoisseur of screamo, hardcore punk and black metal is a very conscious part of Farce’s past from today’s perspective. Artists like Imogen Heap or “bad bands like Brokencyde” were pioneers in terms of autotune, for example. And today you can find it in this form not only on Charlie XCX’s tracks, but also on Farce’s.

From today’s point of view, however, she sees the emo scene itself as divided. Like many other music scenes, it was a hetero-male scene, in which, as a nonbinary queer person, it was simply never safe, as Farce remembers. But the early musical influences, as well as the aesthetics definitely left a strong impact: “There were so many men who looked so gay, who really moved away from the prevailing image of masculinity. That was a cultural moment where a lot came together.”

The new album “Not To Regress”

Not much can be revealed yet, because the second album will be released at the end of the month. “It has ten tracks. It’s a crisp 31 minutes long, and I feel like it achieves what I wanted to achieve in those 31 minutes,” the artist says in an FM4 interview.

What she wanted to achieve with this record is that you want to listen to it again and again, that it’s fun, and “that it enters different places.” Musically, the album should be a logical development of the Farce sound, but not only die-hard fans will enjoy it, because you can also just get into “Not To Regress” and discover Farce for yourself.

Fittingly, the release show will take place at the Hyperreality Festival on May 21. Fittingly, because Farce has performed there many times before and since then she has a deep friendship with the whole team. Until the end of May, let’s warm up with “Trophy Wife”, the first single: