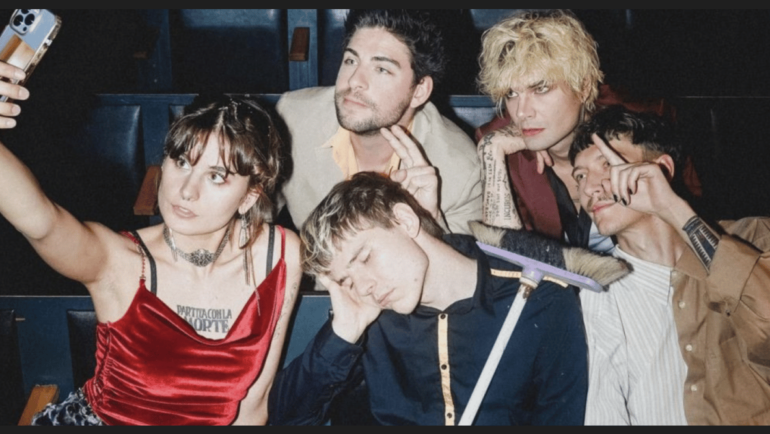 Jeremy Pascal is the alter-ego of four young musicians from Vienna and the Soundpark Act in January. The debut album “Jetsetters & Supersoakers” was released in November.

If you google “Jeremy Pascal”, the hits will mainly yield articles and videos about a reality TV star of the same name. And it’s the perfect name for a band from Austria that has made it their mission to musically convey what it means to be young. In the FM4 interview, Tino and Law from Jeremy Pascal talk about the origin of the project and about their debut album “Jetsetters & Supersoakers”.

“The whole thing actually started as a fun project,” Tino tells us. “I started with two producer friends. Then when the others joined, we thought it would be cool if we all wrote the lyrics together.” The songs feature the alter-ego Jeremy Pascal, a person who combines the experiences of all the band members.

The birth of an alter-ego

“In the beginning, Jeremy Pascal was a broken teen person. Now it’s just a young person who’s going through a lot,” Law says. “Positives, negatives, family and everyday stress, heartbreaks. But also beautiful things like love and euphoria. It’s just to describe what it means to be young, to experience things and how much happens during that time.”

The four process all that in pop-punk songs in Y2K style. At the same time, they don’t settle on one genre, but experiment with beats and soundbeds from different directions. One song sounds very guitar-heavy, the excellent feature with Luca Malina goes in a more electronic direction, some evoke memories of artists like Lil Peep or EKKSTASY, the next one hits the classic pop-punk notch again.

“We want to keep moving and evolving all the time,” the band says. Makes sense, after all, an alter-ego ages and grows with the minds it arose from. Further development is also a good cue, as the people behind Jeremy Pascal have already made a name for themselves before this project. Tino Romana we know from his time as a singer and songwriter with “The Crispies”, Michael Tauschmann is a gifted guitarist and songwriter with several solo releases to his credit.

Bassist, singer, and actress Law Wallner had an international breakthrough last year with her role in the award-winning film “Sonne” by Kurdwin Ayub and has also released the first songs of her solo project Law. together with the fourth band member, Nico Winkler, who as wink182 has also produced for acts like Skofi or Zascha.

Music for people who feel

The fact that the band members have also knew each other well before they became the Jeremy Pascal project is a supporting factor in the songwriting process. “It’s very therapeutic to sing and write autobiographical lyrics about situations that have happened to me or others,” says Tino. “And you totally reflect a lot together when you write collectively.”

So, broken down, the songs on the debut album “Jetsetters & Supersoakers” are excerpts from the diary of Jeremy Pascal. What the band has been through, individually but also collectively, becomes the experience of an authentic person that feels real. “We want to resonate with people, explore any emotional world,” Law says. “We want to be heard by people who want to be heard. I think we also always want to be honest with ourselves and stand for something. That’s why we want to have listeners who know where they stand or find out what they stand for through our music. And that they can be proud of it.”

Jeremy Pascal is music for people who feel a lot and intensely. Who go through abysses and fall very deep, to then get up again and continue. Who savor every beautiful second of life and despair when it slips through their fingers. Who laugh until they cry and love so much that it hurts. A tribute to being young and growing up, the (audio) diary by Jeremy Pascal.

Jeremy Pascal will play at the FM4 Birthday Party 2023.