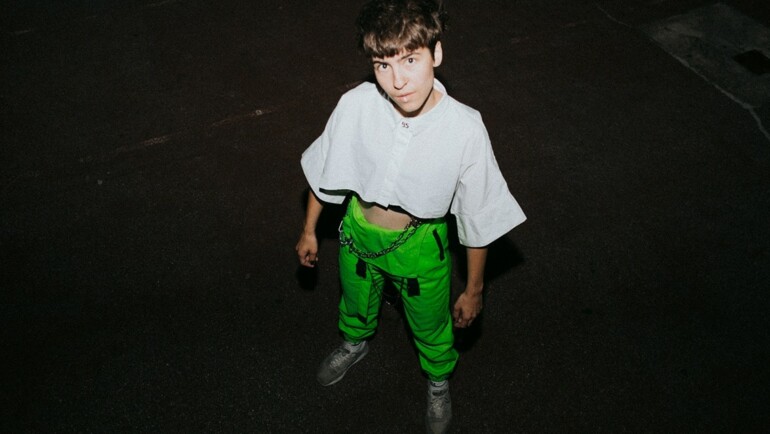 On fire: multi talented Kathrin Kolleritsch with her empowering rap project Kerosin95 is the FM4 Soundpark Act in August.

If you ask Kathrin Kolleritsch about the driving force behind Kerosin95, she only says one word: “rage”. That’s surprising when you listen to the previous musical output of her newest alter ego, because here nothing sounds too aggressive and raw. The Kerosin tracks – so far “Außen hart innen flauschig” [Hard on the outside, fluffy on the inside] and “Hass” [hate] have been released – are rather funky and almost friendly, they come at you with wordplay and a precisely performed rap while being carried by smooth basslines and beats: “Not always tactful, but always in the rhythm of the metronome”.

The title of the single “Hass” might also be misleading, that is until you carefully listen to the lyrics or until Kolleritsch explains the background to this song. It’s actually about the hatred of the others.

The song describes a way of dealing with queer-hostile situations, on the street and in everyday life. It’s about exposing and analysing the hate-filled comments, and completely overthrowing the person who throws those comments at you, for no reason at all. It’s an ego boost track for “wack situations in everyday life.

In a matching video clip, friends from Kerosin’s environment step in front of the camera and perform the text which also speaks for them. „Wieso immer so hart, wieso nicht bisschen zarter? (…) Glaubst du hast ’nen Panzer, doch bist ziemlich durchsichtig. (…) Nimm dein Herz aus dem Kühlschrank und schmeck es.” [“Why always so harsh, why not a little more tender? (…) You think you have armor, but you’re pretty transparent. (…) Take your heart out of the fridge and taste it.”]

Because personal messages such as these can best be spread in the native language, the German language is the biggest change of the project Kerosin95, next to the rap. In the world of pop music, Kathrin Kolleritsch, who as a non-Cis woman prefers the gender star next to the personal pronoun, is no unknown person, as she was responsible for drums and voice for the bands Kaiko and James Choice and the Bad Decisions for many years. She also splits her talents between rhythm section and microphone for this year’s hottest traded indie garage band in Germany, My Ugly Clementine. There, too, the skills of her prominent fellow musicians Sophie Lindinger, Mira Lu Kovacs and Barbara Jungreithmeier, as well as Kolleritsch, come together with a refreshingly unpolished desire to play.

Rap has always been something that accompanied me, but I always thought it was too corny in German. I’ll never be Lauryn Hill – even if it’s not about that. But at some point I gathered the courage. I have the feeling that in German everything is much more direct, and it’s also a lot of fun.

Her raps, although a good outlet for angry feelings, are in the tradition of the friendly, sometimes role-playing style of poetry slammers like Yasmo or Deutschrap gentlemen like Fanta 4. Kerosin95 is also tongue in cheek, for example when the waitress, repeatedly harassed by guests, lets her annoyance run free and vows to herself what people with experience as waiters and waitresses will certainly find familiar: “Never again Gastronomy!”

The power behind her tracks was recently on display at the Popfest Wien when Kerosin95 played a highly acclaimed concert on the opening day in the Wien Museum. The almost academic precision of the performance, which she recently achieved with her band (Max Plattner/drums, Oliver alias Olinclusive/decks, Nastasja Ronck/synth & guitar) during an FM4 Acoustic Session in Studio 2, gave way to a rousing energy in front of the live audience. Kolleritsch whirled across the stage in green dungarees, let her anger run free and seemed to find herself. Her voice tilts with lines like “Du und deine Macker, setzt euch hin” [you and your buddies, just sit down]. You feel that this art does not come from ability, but from necessity, and its rallying cry is “community”. It’s true: Kerosin95 burns, and it’s burns brightly.