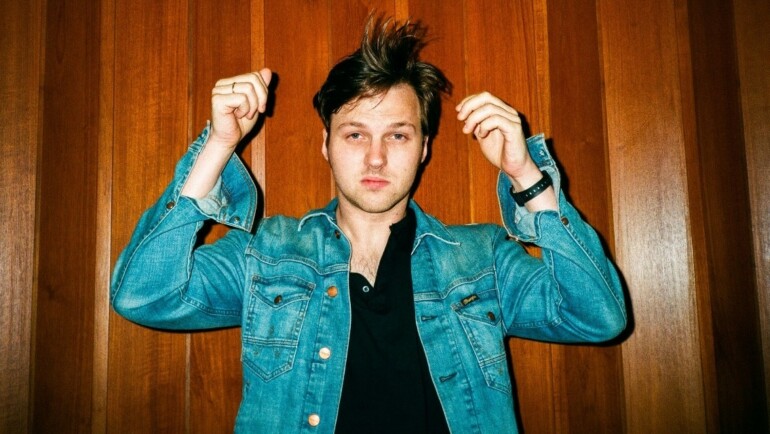 Americana from Vienna, somewhere between Dinosaur Jr. and Wilco. Laurie is the FM4 Soundpark Act in April because: Timelessness is a precious thing, not only in fashion.

The Nationals Matt Berninger is known to write very demanding texts. He likes to sit down in front of his wife Carin Besser’s bookshelf, which is pretty well assorted. From book titles by Sean Wilsey or James Salter, Berninger then builds abstract and beautiful sentence structures like in the song “Light Years”.

If you listen to Laurie’s songs – his first solo album is due for release on 10 April – you quickly get stuck on equally well thought-out as emotionally charged sentences. “A burst of light / A moment of insight / Born in the glare of the headlights” he sings in the song “Your Man”, for example. “I get on with life as a scientist / But I’m a shaky person” are the first two lines of “Scientist Of Man”.

Actually, says Laurie laughingly in the phone interview, he just ran two topics that were on his mind through a lyrics-generating-page, for the latter song. “Science” and “mankind”. That is, seen through a romantic lens, briefly disillusioning. And then again, at the same time it’s a contemporary, not to say quite clever move of a musician who knows what he’s doing. Because he’s been doing it for a long time.

Please excuse the way I talk

Laurenz “I am sad / so very, very sad” Jandl has already written lyrics for one of the former best bands of the country, namely Polkov. Golden treasures of Austrian music history have been created such as “Promised Land” or “Kamaro’s Song”. Rarely anyone has suffered so beautifully in life as Laurenz Jandl and his group, seemingly always trapped in the knowledge that one can cry for people and their world as well. And that this is done best with and through wonderfully beautiful songs.

Laurenz Jandl has named his solo project Laurie, since the Polkov members have scattered in many directions. But they are not that far away: a large part of the former band line-up has also performed his solo pieces with him in the studio. It’s not for nothing that a small, soft and weird Polkov spirit is still wafting through these nine new songs.

How to make oneself laugh

For many musicians it might be just like that, yet few like to talk about it, Laurie does it openly: “Auto-Analysis” he calls his lyrics, “a psychotherapy from me for myself”. Being in love with oneself often makes up a large part of good songwriting – about whose feelings should you write if not about your own? Whoever does it well throws in some irony in between the lines.

“But first I think you should change a thing / or two about yourself” sings Laurie in “Everything Must Go”, the musically most direct Dinosaur Jr. reference on the album: “For me there’s no problem between us”. And that is the problem.

What once was good, is good

Laurenz Jandl has studied, imitated and rejected his role models. With his album “Scientist Of Man” he has made an attempt to break everything down into the straightest, simplest lines. That’s why you often only hear a plain guitar accompaniment in addition to the voice, or, in an enhanced form, a classic rock band setup.

There’s something sad and old in Laurie’s voice which, in combination with the afore-mentioned simplicity, quickly seems nostalgic. A feeling that musicians like Wilco’s Jeff Tweedy or Adam Granduciel (The War on Drugs) have already spent nights on end struggling with its meaning. Precisely in that way one can express that something special is present. Something that stands the test of time because it’s special.

“Turns into a song”

A few months ago Laurie released his first single “Heaven On A Thread”. A calm and small masterpiece. It bundles up the whole Laurie project like a microcosm: Every line fits, is abstract and yet tells a story, is wistful and therefore good.

At the end, when we’ve reached a meta-level and the song turns into a song about a song, it’s clear: Here’s one of the most talented musicians in the country writing songs.