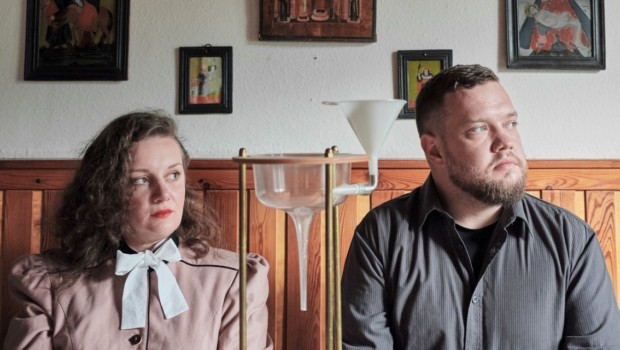 Nødstop: Music to pause for a moment

With their new band project Nødstop, The unused word (Anna Schauberger) and Testa (Lukas Ljubanovic) first get us dancing – then thinking. Thanks to their new EP “Ø” they are the FM4 Soundpark Act of May.

All musicians want to touch someone through their music. Those with an additional mission may want to also share a message. But that should be dosed correctly, because a pointed finger doesn’t sound the same to every pair of ears. On their first EP Ø, the Austrian duo Nødstop achieves this balancing act quite elegantly: Their eight songs can be enjoyed and listened to without focusing on the content of the lyrics. But there is a good chance of them pulling you out of your head nodding – and you notice that the catchy opener “Summer” is actually about the imminent climate catastrophe or #skyporn about homelessness. It’s this exact moment that the band name, pronounced in English as nodstop, describes, rather appropriate since the band were inspired by the Danish word for emergency brake.

The good chemistry between the unused word and Testa

Before the joint band project Nødstop, The unused word and Testa already have a few years of history together: Ever since the producer and singer, who lives in Bad Ischl, teamed up with the Viennese label Duzz Down San for her debut EP, the producer and turntable musician with Tyrolean roots takes care of the mastering of their songs. Coupled with some successful remixes, this created a basis of trust and a shared wavelength.

The good chemistry between The unused word and Testa quickly showed results during joint sessions in Bad Ischl: Both contributed sketches and beats, which were then polished and elaborated into songs together. The band’s name was brought to The unused words attention during a short stay in Denmark and was accepted just as easily.

As easy the process, so complex the categorisation of the release into any narrow genre. Musically, “Ø” combines futuristic pop designs with deeper hip-hop songs or pieces that cant deny a strong influence by the classic Bristol school. You could “just” listen, but thanks to the sociocritical lyrics (which you can read here by the way) you also learn to appreciate this mature debut EP on a much deeper level.

By Stefan „Trishes“ Trischler – translated from the German article (FM4) by Dave Dempsey.