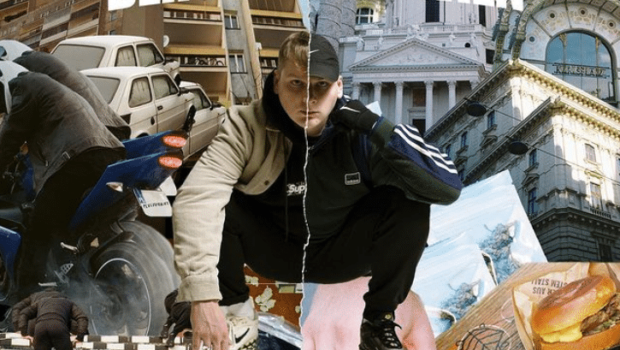 The FM4 Soundpark is a web-platform, community, and radio show for Austrian musicians. Every month, one act is selected to be highlighted both online and on air. Wiener Rap und Polski Sklep: SLAV goes his way, with palpable determination. Shortly before the new album drops, the young rapper from Vienna is the “Soundpark Act of the Month”.

When SLAV first started rapping in the scene, he was actually still too young to be in the “club”. But the world of rap-battles captivated the Viennese early on, and he soon made a name for himself there, albeit a new kind of one. From there, some very intense years followed, alongside YUGO, with whom SLAV not only lived and made many songs together, but also played high-energy shows – from smaller to larger stages, such as at the Donauinselfest or as the opening act for RIN’s German tour.

From “Citybike” to “Bus” in less than four years: It’s not just SLAV’s preferred means of transportation that have changed since his public debut. He’s seen a lot in the meantime, especially regarding the music industry; and that’s probably exactly why he’s now working with a major German offshoot, though still through his own label. It’s called Plusvieracht, which is both his debut album and merch store.

The telephone code of Poland (+48) represents the strong connection SLAV still has to his motherland. Although he himself came to Vienna when he was three years old, it remains just as present through the language and regular visits, as well as through the numerous Polski Sklep shops in Vienna. Some of the drinks available there are mentioned in SLAV’s songs, just like his favorite brands for sportswear and shoes. There may also be some completely Polish language rap songs coming out in the future, but then probably written with a crossed Ł in the name and pronounced with its original sound. In any case, his new album, which is scheduled for the end of the month, is ready to go, and will bear the reference to his roots in the title: The Pole from Vienna.

If the many SLAV releases of the last few months are any indication, you’ll hear contemporary drill beats and songs about clubbing, as well as calm and melodic numbers. In addition to his perfectionism with regards to precision and distinctive rap techniques, the young rapper has also taken on a certain pop feature in recent years. This versatility has been well received: At the inaugural Hip Hop Awards of the Viennese magazine The Message, SLAV was awarded “Act of the Year” 2020.

With the Combo EP alongside his old friend Bibiza, plus the upcoming album, SLAV will probably be eligible for a few awards next year, as well. And we can all certainly look forward to the build-up factor of the first comeback shows!

Translated from the original German version by Arianna Fleur