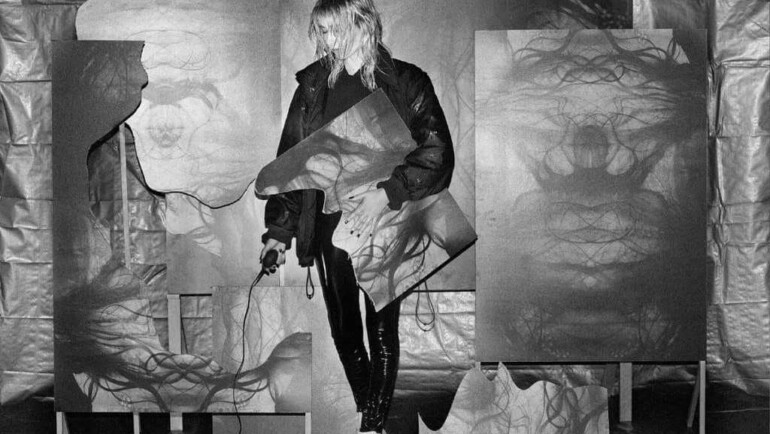 The FM4 Soundpark is a web-platform, community and radio show for Austrian musicians. Every month, one act is selected to be highlighted both online and on air. On August 19th, SOPHIA BLENDA released “Die Neue Heiterkeit,” an album of the year. The FM4 Soundpark act for August.

Sophia Blenda just performed in the Karlskirche (St. Charles Church) at Popfest Vienna – a coming together, an Austrian music showcase and a springboard. It is usually the last festival evening in Vienna’s Karlskirche which shows the pop star of tomorrow – this year it was quite the same. Her name is Sophie Löw, she is 26 years old and she was on stage with her excellent band as Sophia Blenda. This is pop music, in this case one may hang the beautiful addition “chamber” in front of it.

“What makes a good pop song for me is that the song has an open space for the individual things that you can interpret into it. You have to listen to it all the time to work through this thing that you just want to interpret into it, or just: bring it into your life.”

Sophie Löw has already written excellent lyrics for her band CULK; but if you want to know what urgency sounds like in contemporary chamber pop music, listen to the lyrics of her solo project. This is the kind of music that makes you wish the little black dots and the word “more” were followed by the lyrics in the Youtube video version, so you can read along. Bohrende Hoffnung / Auf meiner von dir bedrohten Haut / bedeckender Hochmut / deiner Augen, deren Sicht mir die Heimat in meinem Körper raubt“, [“Nagging hope / On my skin threatened by you / covering arrogance / of your eyes, whose vision robs me of the home in my body,”] sings Sophia Blenda in the song “BH”. This is politics and thickened reality; this is what good poetry can do: dig its way into the heart of the matter without empty phrases.

How often people joke about how tough and harsh the German language can be. In any case, it is not the easiest language in which to speak and write about love, suffering, life. This frequently results in platitudes. Regardless of this, very few German-language newcomer acts will achieve an international breakthrough. Sophia Blenda has meanwhile signed with the German branch of PIAS Recordings, where acts such as Agnes Obel, Editors, Roisin Murphy and Soap&Skin are represented on an international level. So, no worries in that respect.

A hand-wringing search for comparisons, but that doesn’t quite work out. That is of course a great compliment. Sophia Blenda’s musical heroines include the aforementioned Soap&Skin, but also Aldous Harding. In other words, people whose music very elegantly ventures along the line between pop and experiment. Just like Sophia Blenda, who writes music that always remains a bit of a mystery.

“Die neue Heiterkeit” was thus released by PIAS Germany in mid-August. Designations like “album of the year” have already been murmured or shouted out in circles – it is true in both ways. This is great music.

The highlights of Sophia Blenda’s live performances as well as those of her album come close to total an emotional overload. “Do gspiast di,” [“You really feel yourself,”] a dear friend would say at this point. When you wake up after a night of drinking, when you really fall in love, when your heart breaks, and when you listen to Sophia Blenda.

[“Sometimes she misses the language
The past overtakes the new openness
Open remain, they who reach into the future
Presumption remains the appeal to the supposedly great security”]

…is what the title song of the album “Die neue Heiterkeit” says. Sophia Blenda can play at the Karlskirche, but Sophia Blenda could also sit in the reading garden at the Bachmann Award. This is the intellectual pop excellence you deserve (the platitudinous German language, remember?). Yet Sophie Löw herself reads almost no poetry. “I found this language for myself when we wrote the CULK single “Begierde/Scham”. It poured out of me,” she says. Prose, then: If this nine-part album were a novel, what would be the frame story, which people are we accompanying here?

“We follow a young woman who goes through life, whom we accompany in everyday life. We get to know her family, her friends and also her struggles. You will see many injustices, also the abysses of people. But what remains in the end is the unity of the people who suffer injustice. And that’s much stronger than anything else.”

“Cheerfulness is vigor, movement, life,” the Austrian writer Marie von Ebner-Eschenbach wrote, or, again, Ingeborg Bachmann: “Nothing more beautiful under the sun than to be under the sun.” Sophia Blenda takes it further, “I take the cheerfulness myself.” There’s no cynicism there; this is the future we’re meant to reach for.

“I actually really meant the title that way,” Sophie says, even if many friends thought of it sarcastically at first. “The album is a lot about fears, and that’s where I had the realization – although it’s logical anyway – that fears are always constructed and therefore always a choice. And at the same time, there’s also this cheerfulness, or just a kind of happiness as a decision that you can make. That’s what the album title means to me, that sometimes it’s not a hundred percent cheerfulness, but it’s a new, adapted form of it.” The ridiculous, beautiful life.

Boldness is one of the many important styles in pop. Because it’s loud and can be obnoxious, because it helps, even when it doesn’t always serve the musical cause. Because it can be a way of looking over the edge, of getting out of the bubble. But when you do it as well as Sophia Blenda does, there’s no need for ostentation. She writes not only about self-empowerment and sisterhood, but also about fears and imposed resignation. And in doing so, she writes not just for the (politically) like-minded, nor just for her generation. Many who are no longer young still do not benefit from the big words feminism and emancipation. With said fear never in between, but always really in the lines, Sophie Löw says: We’re nowhere near where we need to be.

“I’ve tried to sprinkle in glimmers of hope alongside all the negativity that happens in the lyrics. For me, that often reflects the approach that people have, that maybe you just have to look a little closer to also see something beautiful in the sadness.”

[With the quietest reserves in darkest spaces
“Take me to a party” she whispers softly.
Let old thoughts rebel as she dances before them]

A centerpiece of this album is called “Fun” – perhaps the very best. There’s a lot of what makes up Sophia Blenda’s songs in there. There is joy, but a questioning joy. “I think I’m having fun tonight,” she sings, more implication than fact. The song is dedicated to a friend who has been going through a rough patch, it’s a handshake and running-through-the-night-together. “The other songs are mostly about heavy topics, so I also wanted to make one that shows: Sometimes it’s not necessary to go more and more into the downward spiral, sometimes you’re allowed to forget everything for a second.” And you see them in front of you, these friends, laughing loudly, holding each other in their arms, glowing from within.

“Music has such a superpower; when you feel alone or sad, for example, it can pick you up,” says Sophie Löw at the end of our interview. “Die Neue Heiterkeit” is also full of anticipation, little riddles and hopes, full of music for the brave and lonely and everyone else, full of music, the greatest joy of all. No cynicism, and if, then only a little bit: We’re all in this together.