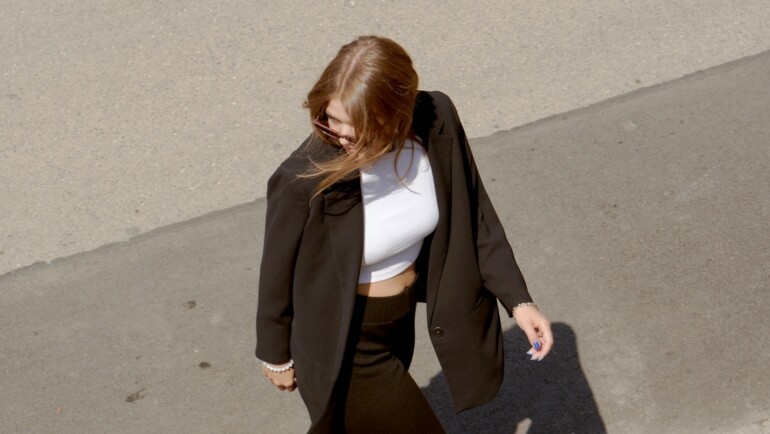 The FM4 Soundpark is a web-platform, community, and radio show for Austrian musicians. Every month, one act is selected to be highlighted both online and on air. Pure melancholy and nights of reveling: VERIFIZIERT is the Soundpark Act of the Month of November.

Scraps of memories of endless nights, heartbreaks and lots of sad vibes: the 24-year-old Viennese Verifiziert has found her own niche in cloud pop and is our FM4 Soundpark Act of the Month of November.

Actually, it wasn’t all that serious when Verifiziert started making music a few years ago. Creating trashy beats on Garage Band with a few friends, rapping over them and making the whole thing accessible to the outside world via Soundcloud just for fun – that’s all there was to it. “At some point I did it on my own, then things got more and more serious and then suddenly there were people who said: Hey, I’m really listening to this a lot, it’s really good.”

First of all, because the word “rap” was mentioned several times in the last paragraph: Verifiziert doesn’t really rap at all. At least not if she has her way: “I wouldn’t really say that I rap, because I just sing. We thought for a while what name we could give this genre and then came up with Cloud Pop, because there are so many different genres – and I’m trying out a different genre every week,” she says in an interview with FM4.

Since her first release in 2019, the 24-year-old has been skilfully switching genres between banging trap beats, electronic radio pop and slow ballads, adorned here and there with a good portion of Auto-Tune, then again a few indie guitar samples or dreamy synths. Sometimes it almost seems as if Verifiziert is making up the genres to support the content – but now not à la “sad songs need minor chords. On “Rote Gauloises”, for example, Verifiziert is singing about meeting someone in a club: it’s five in the morning, she meets someone, he wants to smoke a cigarette with her outside, she goes along. The muffled techno beat that carries the story only becomes clearer with the hook, a bit like if you were just standing outside a club and could already feel and hear the bass in a dulled way, but only noticed the rich sound as soon as you opened the door.

With this mix, she is pushing the envelope, testing her limits and seeing what happens when she just goes about it. Streaming numbers or pretending to please pre-formed tastes are of little interest to her: “I think it’s good if not everyone likes it. Then it’s much more special, much more valuable. If everyone would like it, I don’t think it would be as cool.“

Fragments of memories and feelings

While the productions – which sometimes come from her good friend and Day One companion sepfl, sometimes from the Viennese producers food for thought (Edwin, Dirty Sanchez) and Skyfarmer (skofi) or the Bremen producer Florida Juicy –  always provide little surprises, and lyrically it’s clear what we are getting into with Verifiziert: The purest kind of melancholy compressed into a few words that instantly create clear images in our head.Endless nights of reveling, and hungover days afterwards, crushes and heartbreaks are what Verifiziert is letting us participate in. Feelings take up a lot of space in her work, as does the urge to numb them. The whole thing has something cinematic about it, as if the various songs were individual scenes of a coming-of-age movie playing in front us. For example, on “Tschick” (“Cig”), the first single from her forthcoming tape, she sings:

“Church bells are ringing, I smoke a hundred fags / Lose control on the roof and there’s lightning / The ravens, they fly so fast into the light / You take my hand and say, “Girl, come with me now!” / It starts to rain, my jacket gets wet / I can’t hear anything anymore, I just feel the bass / See my mobile phone light up, you ask what I’m doing / Shoot the arrow into my heart and I lie awake again.”

For the Viennese, these lyrics are collages from her past, as cheesy as that may sound now: “They are not necessarily diary entries, but when I write songs, I’m thinking back to that time, between 14 and 20, when we just were on the road a lot, had a lot of heartbreaks in our group of friends, a lot of arguments and simply experienced a lot. Somehow we were doing so well, but also so badly, there’s just so much to write about. When I write a song, it’s like one third of the song happened to me, then I’ll include a fight between two girlfriends and paint a picture from several fragments of memory.

Seemingly seamlessly, she switches in her music between honest, sincere feelings and almost dadaistically funny lyrics. The latter can be found in abundance on one of her first singles “Butterflies” or on “Flat White”:

“Wake up, old flat, walls creamy white / Would love to sleep on.
Flat white with oats on ice / Spill it on my carpet, what a shit / Run me a bath with lots of foam / Turn around and can’t believe my eyes / there’s a hoodie with a yellow hem lying on the sofa”.

Through this mixture, she’s conveying a certain sarcasm, a kind of Viennese humour that feeds on deep abysses. Verifiziert, who has been celebrated in Germany as one of the most exciting newcomers for a long time, makes it quite clear that it is precisely this Viennese charm that goes down so well there: “I think that a lot of people wouldn’t even listen to my music or wouldn’t celebrate me that much in Germany if I weren’t from Vienna. That’s always the argument, when my music is being played somewhere or someone talks about me, it’s always the Viennese charm and the Viennese women and blah blah blah. So I think that’s already very important for my music and for me by now.”

When it comes to plans for the future, the musician turns quiet rather quickly. For her, things are always showing up at short notice. “I just want to make music and be happy with it,” she says somewhat sheepishly, but firmly. Her art lives from this spontaneity, that much is certain. But what is certain too, is that on November 12 her tape “40100” will be released, a feel-good tape, as she calls it, “because it was all made in a completely beautiful environment and is connected with a lot of memories.“

We will hear nine tracks on it, from sad anti-love songs, to very personal numbers, to tracks that she “just recorded for fun and that are also in there just for fun,” she says with a laugh.

Two songs are already out: “Tschick” and “Pick You Up”. And if you’ve heard Verifiziert’s songs before, you’ll know that references to cars (40100 is a taxi business) just don’t come from anywhere: Her first song was a tribute to her VW Golf 4, followed by songs about cruising the Höhenstrasse [note: a street in the Vienna hills] and crying in the car. The best ideas for melodies or lyrics come to her in the car, but sometimes it’s just liberating to drive through the neighbourhood bawling out loud Paramore. “I just love driving a car, unfortunately,” she says and laughs.

Published on November 1st, 2021, translated from the German original by Julian Schoenfeld