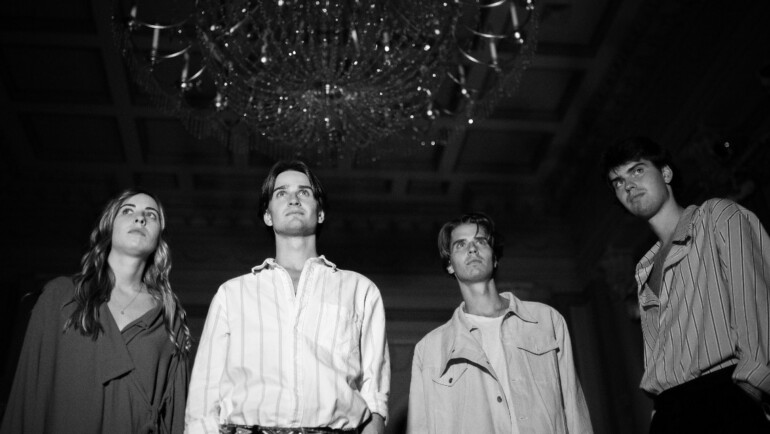 The FM4 Soundpark is a web-platform, community, and radio show for Austrian musicians. Every month, one act is selected to be highlighted both online and on air. The FM4 Soundpark Act of the Month.

It’s a small room, located at the very top of the house, where the sloping ceilings made to butt your head on and good old secrets have accumulated in the corners. Beatles faces grin from the walls, records from the 70’s and 80’s lie around in piles. And what else? Computers, amps, speakers, guitars, lots and lots of microphones and a piano. “Total chaos,” laugh the Wallners. This small, cozy, well-stocked place. This is where their songs are created.

It must be told, the band, Wallners, is a family affair: the four siblings Anna and Laurenz, Max and Nino, with all its pragmatism, turned the family name into the band name. Here, everything falls into place in the most natural, obvious way, including growing up with parents who run a piano store. “It was pretty practical. There was always a piano somewhere around that someone played on,” Laurenz tells FM4 in the interview. Growing up and growing into a band has evolved over the past decade. One can imagine how many unreleased songs the four siblings have sitting in the desktop folder, “Stuff.” There are many. With “Prologue 1,” five of them are now open to the public. The Wallners released their first EP at the end of February.

The debut single “In my mind” was released six months ago, and it has paved the way. In recent times, a song has rarely succeeded in not simply adopting the long-guarded pop hit recipe of repetition, but making it its own. Everything circles around and returns to that one line “in my mind”. It’s minimalist and cleverly done, playing into those very deep areas of the heart and brain where the desire for security has been hiding. The wisely aged sound this song embodied is due to the wonderfully dark voice of Anna Wallner. Yet, simultaneously, the young and fresh sound comes from the fact that the Wallners are at the beginning and want everything: “We’re gonna live free / and live wild”.

“We wanted to release this single first, because it leaves so much open, because it can’t quite be categorized,” Anna Wallner tells us. In any case, this song could be classified by a major label to the extent that they signed Wallners with it. And that, especially in the field of indie pop and especially in Austria, is not something to be underestimated.

Three of the five songs that make up the first EP “Prologue 1” have already been released in advance as singles, including the mystically beautiful seafaring story, “Ships” and the once again piano-driven, “All Again”. Since all the Wallner siblings are still in their young 20’s, this first collection of songs may well still be called a “coming-of-age record.” There are five songs that deal with memories, with places of longing, but, above all, with the passing of time. Juicy and thick as honey, not only does it flow over the canvas for Salvador Dali, but also here:

“May days they were hard

Life, how it runs away and yet comes back again. Situations that repeat themselves forever, for better or for worse. We’ve all been there, where relationships break down, where parents grow older and older. Where the questions about one’s career, one’s future are sometimes louder, sometimes quieter. These are texts that conjure up collective experiences, and that is why they largely manage without protagonists. At the strongest points, the lyrics tip over into the surreal and thus open a loophole into the unknown. This also fits very well with the musical dream character of these songs.

Daft Punk have broken up, Daft Punk live on forever. It’s a strange coincidence that the favorite band of Anna, Laurenz, Nino and Max announces its end just when they themselves release their own first EP. And then we’re back to the topic of time and how it slips away; how it constantly demands something new, especially in the world of music. The EP title “Prologue 1” is well chosen. Here are four musicians sitting on the starting blocks. Many are ready for the big career, but not all have what it takes. Those who turn the first lines of their their first chapter into a career, have nothing less than a bright future.